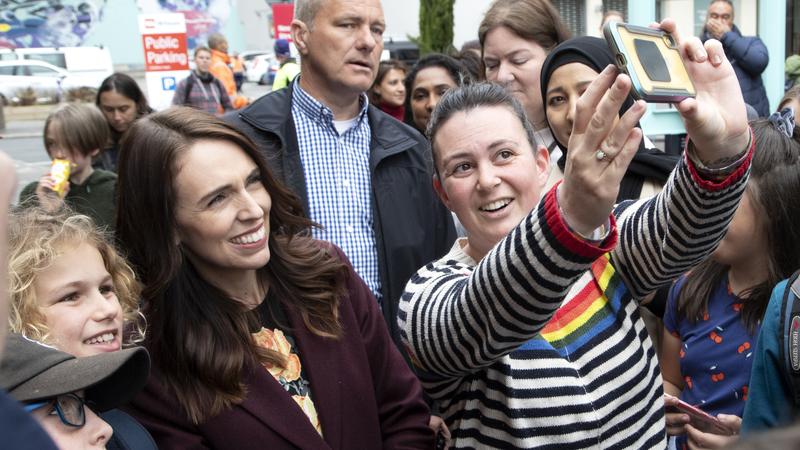 New Zealand Prime Minister and leader of the Labour Party, Jacinda Ardern, has a selfie taken with supporters during a walkabout in central Christchurch, New Zealand, Oct 14, 2020. (MARK BAKER / AP)

While it was initially thought Prime Minister Jacinda Ardern could lead Labour to the first outright majority government since New Zealand adopted a proportional voting system in 1996, more recent polls have indicated she may need to lean on support from the Greens

The closely watched 1News-Colmar Brunton poll showed support for Ardern’s party slipped 1 percentage point to 46 percent from the previous poll on Oct 8 but maintained a 15-point lead over its main opposition National Party, which slipped a point to 31 percent.

This means Labour, campaigning on its record of bringing the COVID-19 pandemic under control in the country, would have 59 seats in parliament, just short of the 61 seats needed to form a government on its own.

Ardern moved swiftly to lock down the country, and the measures helped virtually eliminate the new coronavirus from the community twice, after a second outbreak in Auckland was contained last week.

Labour’s likely coalition partner, the Green Party, bounced back to its highest level since 2017 with a support of 8 percent, which would give it 11 seats.

While it was initially thought Ardern could lead Labour to the first outright majority government since New Zealand adopted a proportional voting system in 1996, more recent polls have indicated she may need to lean on support from the Greens.

That would produce the country’s first pure left-leaning government since 1999.

The current coalition partner, the nationalist New Zealand First led by Deputy Prime Minister Winston Peters, got an uptick to 3 percent but that still leaves it on course to exit parliament with no seats.

New Zealand heads to the polls on Saturday, but over 1.4 million people have already voted in advance voting.

In addition to her pandemic response, Ardern, 40, has won support at home and global admiration for her response to last year’s attack by a white supremacist on two mosques and a fatal volcanic eruption.

Collins has focused on the financial challenges ahead as unemployment rises, recession looms and the government’s coronavirus support packages expire.

The 61-year-old conservative has warned a left-leaning coalition would mean more taxes and a business-unfriendly environment.