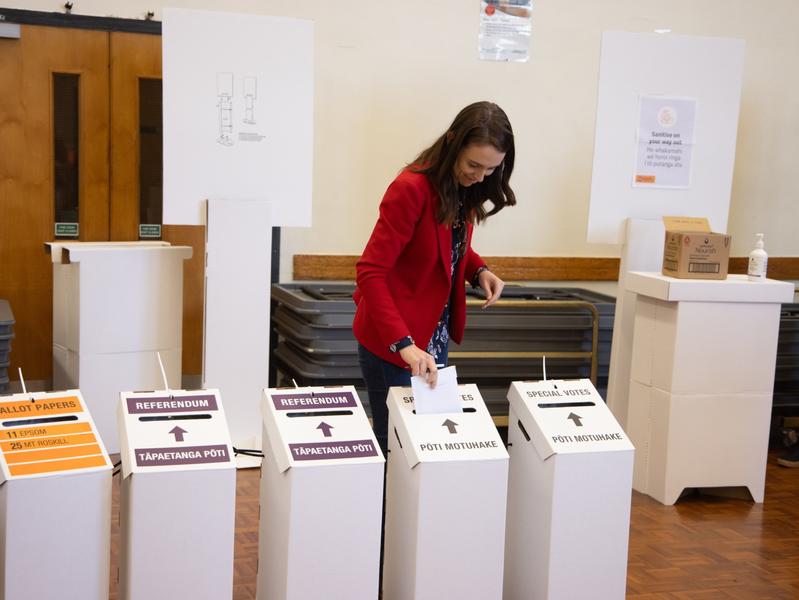 New Zealand Prime Minister Jacinda Ardern has voted two weeks before election day as part of a strategy to encourage people to cast their ballots in advance.

Early voting began Saturday at 450 locations across the nation, ahead of the Oct 17 election day. The Electoral Commission has estimated as many as 60 percent of votes could be cast early, up from 47 percent in 2017.

Our message is to vote early and vote local because it’s more convenient and minimizes election day queues, which lessens the risk of COVID-19.

“Our message is to vote early and vote local because it’s more convenient and minimizes election day queues, which lessens the risk of COVID-19,” Chief Electoral Officer Alicia Wright said in a statement. Differences that voters will notice include physical distancing, use of hand sanitizer, voluntary contact tracing and single-use pens to mark voting papers, she said.

Ardern and her partner Clarke Gayford voted at a local hall in her Mt. Albert district. She told reporters they both backed her Labour Party, but didn’t reveal her vote on two referendum questions being asked this year, on legalizing cannabis and euthanasia, the NZ Herald reported.

While the parties have detailed most of their policies, the candidates are criss-crossing the country with two weeks to go in the campaign, and there is one more televised debate between Ardern and the main opposition National Party leader Judith Collins to come.

Officials plan to have 1,350 voting places open on Oct 10 and about 2,600 locations on election day.

Labour had a commanding lead in the latest political poll published Sept 28, with 47 percent backing versus National’s 33 percent. Ardern is tipped to enlist the support of the Green Party, which was polling at 7 percent.