Free cash for all boosts rising S. Korea star to top of polls

Lee Jae-myung, governor of South Korea’s most populous province Gyeonggi, poses for a photograph in Suwon on Sept 29, 2020. (PHOTO / BLOOMBERG)

Record government spending triggered by the coronavirus in South Korea has helped send a maverick regional governor to the top of polls to be the next president and fueled his push to make the country Asia’s first to introduce universal basic income.

Lee Jae-myung, who has served as governor of South Korea’s most populous province since 2018, warns that without across-the-board income support to address inequality, the stability of the country’s economy could be threatened.

“The capitalist system could fall apart if consumption and demand aren’t supported,” Lee, 56, said in an interview last week. The Gyeonggi governor’s move early in the pandemic to provide handouts to boost the regional economy surrounding Seoul helped prod the central government to take action at the national level.

Lee’s call for the introduction of a universal basic income may also be followed by other politicians with an eye on the presidency, potentially extending the era of expansionary fiscal policy long after the virus is gone. Lee, who grew up in poverty, said he firmly believes growing income disparity would make markets unsustainable, and universal basic income would “fix and further develop” capitalism.

In another survey by Korea Research International released Saturday, however, the former prime minister took the lead with 26 percent of favorability rating, about three percentage points higher than the governor.

“I have confidence in my understanding of how society and the global economy work, and how their problems can be fixed.” Lee said. “I’m not going to compromise.” 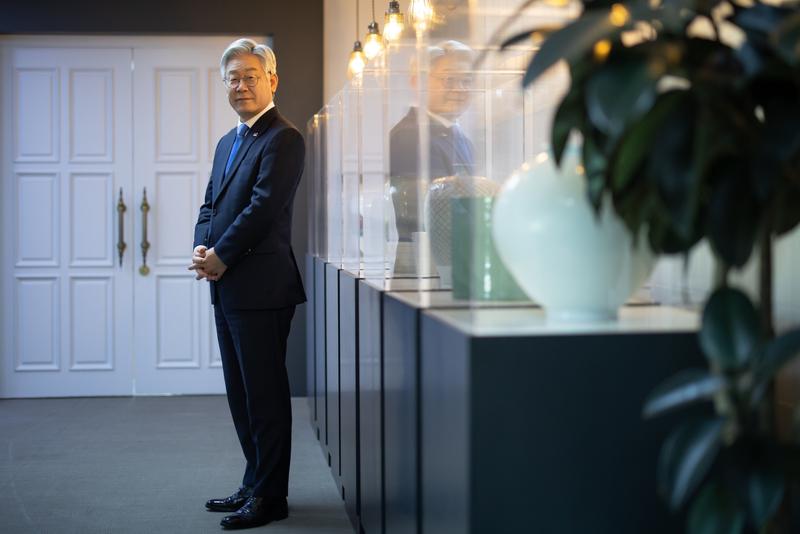 Lee Jae-myung, governor of South Korea’s most populous province Gyeonggi, poses for a photograph in Suwon on Sept 29, 2020. (PHOTO / BLOOMBERG)

While Moon initially made efforts to raise the minimum wage, the country’s income inequality still remains among the developed world’s highest, according to OECD data. Lee said far more needs to be done.

South Korea should start with an annual basic income of about 500,000 won (US$430) and gradually move toward a monthly handout that’s as big over the course of 10 to 15 years, Lee said.

A Realmeter poll in June showed that 49 percent of South Koreans approved of the idea of universal basic income while 43 percent opposed it.

While Lee, who worked as a laborer for six years before becoming a law student at Chung-Ang University in Seoul, calls for more action, the government has already delivered record spending to support households and companies during the pandemic. Last month, Moon’s government provided 7.8 trillion won in stimulus for small businesses via a fourth extra budget. An earlier 12.2 trillion won extra budget provided cash handouts to all families in the spring.

Still, the call for a universal income isn’t limited to Lee or other progressives in Moon’s camp. The idea is also gaining support in the top opposition conservative group.

The newly named People Power Party recently introduced a pledge to seek a basic income. Its interim party leader Kim Chong-in is trying to build support by embracing some of the popular economic policies of the left with a tough stand on security that has been a bedrock position of the right.