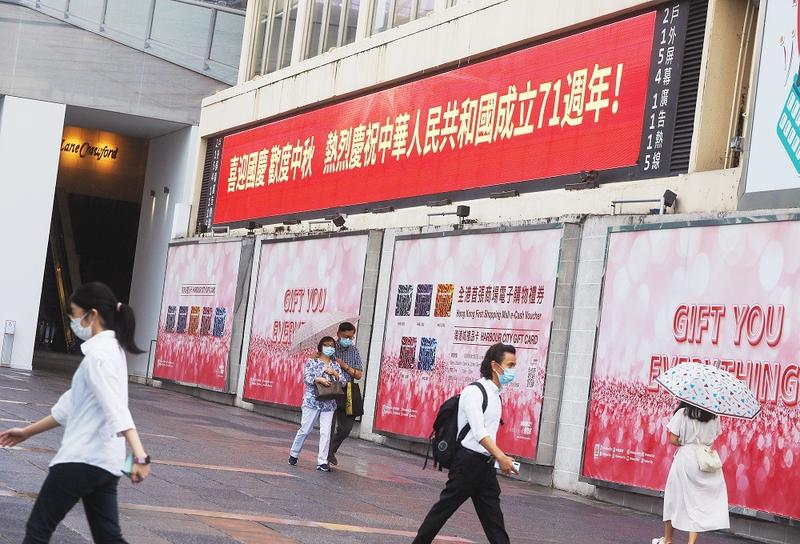 A banner on a building in Tsim Sha Tsui expresses warm wishes for both the Mid-Autumn Festival and China’s National Day on Sept 30, 2020, the day before National Day. (CALVIN NG / CHINA DAILY)

Hong Kong people from various sectors expressed their confidence in its future with the growing strength of their motherland as a powerful factor, as the city celebrated the 71st anniversary of the founding of the People’s Republic of China a day before the National Day.

Their remarks came as festivity spread throughout Hong Kong on Wednesday, with national flags flying across the city. Apart from a high-profile gala marking the anniversary attended by the city’s political and civic leaders, local residents also held and participated in activities across the city to mark the occasion.

Their remarks came as festivity spread throughout Hong Kong on Wednesday, with national flags flying across the city

Some local primary and secondary schools held flag-raising ceremonies, while a group of youngsters from the All-China Youth Federation brought national flags to Hong Kong’s iconic Victoria Peak at dawn to convey their blessings to the motherland.

Speaking at a gala marking the anniversary, four residents shared their experiences and views on the close ties between Hong Kong and the motherland over decades with more than 600 participants. Those engagements, inspiring and exciting, also help them achieve personal growth and realize their life value, they said.

Jonathan Choi Koon-shum, chairman of the Chinese General Chamber of Commerce in Hong Kong, is one of the first local businessmen who invested on the mainland after China launched its reform and opening-up in 1978. Choi said that over the past 40 years, he has witnessed remarkable developments in the country through business exchanges.

In the past few months, foreign investors and Hong Kong entrepreneurs like himself have seen the vigorous economic rebound on the mainland as the pandemic was brought under control. This has boosted their confidence in the economic prospects of the country, he said.

Choi said he was especially proud of China’s commitment to the international community, as it always remained open to the world and strived to promote multilateralism and cooperation on the global stage.

Hong Kong should keep pace with the development of the motherland, “leveraging its advantages and meet the country’s needs”, Choi said. Then, “Hong Kong will embrace a more beautiful future”.

For doctor Liu Shao-haei, the close bonds between the nation and Hong Kong couldn’t have been more obvious than when over 570 medical experts from the Chinese mainland aided the city in its first universal voluntary COVID-19 testing program. Over 1.78 million people were tested during the 14-day program.

Liu, one of the 6,000 local medical staff who volunteered to help in the program, said he was deeply touched by the warm farewell given by Hong Kong people to the mainland medical support team two weeks ago. The scene reminded him of the experience when he led one of the five Hong Kong volunteer medical teams to assist hospitals in Sichuan province after the 2008 Wenchuan earthquake.

The collaboration and support between the two places manifested the “indelible” love and care between the people, he added.

“History has proved that at critical moments, the people of Hong Kong and our Chinese mainland compatriots will all share everything and unite with each other,” Liu said.

Huang Si-hong, a young community officer with the Hong Kong Federation of Trade Unions, embodies the collaboration that exists between Hong Kong and the Chinese mainland.

After four years at college on the Chinese mainland, Huang returned to Hong Kong and joined the city’s largest labor group.

Huang said that she felt excited that her generation could play a role in the development of their motherland in the new era.

During the social unrest in the past year, her social services work came under attack by radicals owing to the group’s patriotic stance. But she never gave up. “Why to flinch from doing the right thing?” she said.

The experience made her more determined and reinforced her beliefs about doing the right thing, Huang said.

“Strong youths lead to a strong nation,” Yun Zhuo, a student from Pui Kiu Middle School in North Point, told guests. “As students, our primary task is to observe the social order and study hard, so that we can contribute to the construction of our motherland and the future of Hong Kong when we become towering trees in the future,” she said.