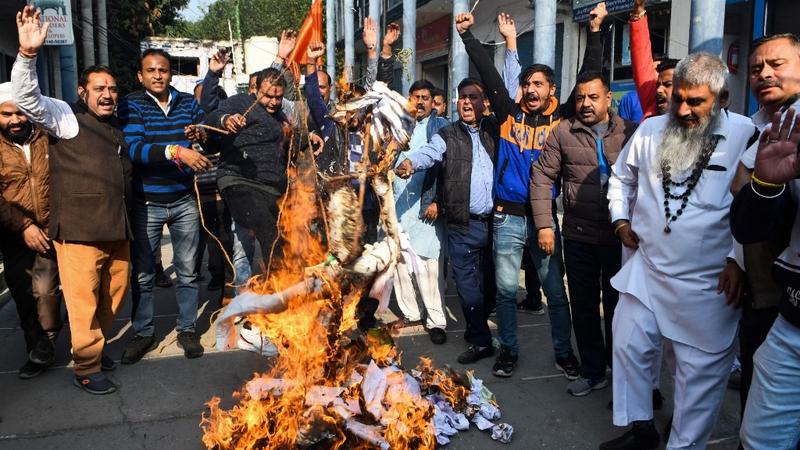 In this file photo, activists from Shiv Sena Taksali shout slogans as they burn effigies of 'rapists' to protest against the alleged rape and murder of a 27-year-old veterinary doctor in Hyderabad, during a demonstration in Amritsar, Dec 5, 2019. (NARINDER NANU / AFP)

LUCKNOW/NEW DELHI - A woman from the lowest rung of India’s caste system died on Tuesday weeks after authorities said she was raped by a group of men, triggering protests in New Delhi with hundreds gathering at the hospital where her body lay.

Her case was the latest in a string of gruesome crimes against women in India that have given it the dismal reputation of being one of the worst places in the world to be female.

Every 15 minutes on average, a woman in India is reported raped, according to 2018 government data released this year

Every 15 minutes on average, a woman in India is reported raped, according to 2018 government data released this year.

“There is next to no protection for women. Criminals are openly committing crimes,” Priyanka Gandhi Vadra, a leader of the opposition Congress party, said on Twitter.

The 19-year-old victim, belonging to the Dalit community, was attacked and raped Sept. 14 at a field near her home in Hathras district, 100 km (62-mile) from Delhi, authorities said.

Police have arrested four men in connection with the crime.

On Monday, the woman was brought from a hospital in Uttar Pradesh state to New Delhi’s Safdarjung Hospital, where she died while undergoing treatment, authorities said.

Hundreds of protesters gathered inside the hospital premises on Tuesday, where they jostled with police and briefly blocked traffic on a main thoroughfare.

Dalits, at the bottom of India’s caste hierarchy, complain they are denied equal protection under the law because of prejudice.

Activists from the Bhim Army, a party championing Dalit rights, chanted slogans near the hospital’s mortuary, where the woman’s body was kept. Dozens of paramilitary troops were deployed nearby as evening fell.

Bhim Army leader Chandra Shekhar Aazad asked Dalits across the country to take to the streets, and demanded the culprits be hanged. “We can’t take this anymore, we want justice,” he tweeted.

District authorities in Hathras said the matter would be taken to a fast-track court to hasten the investigation.

Last December, a 23-year-old Dalit woman died after being set ablaze by a gang of men as she made her way to a court in Uttar Pradesh to press rape charges.