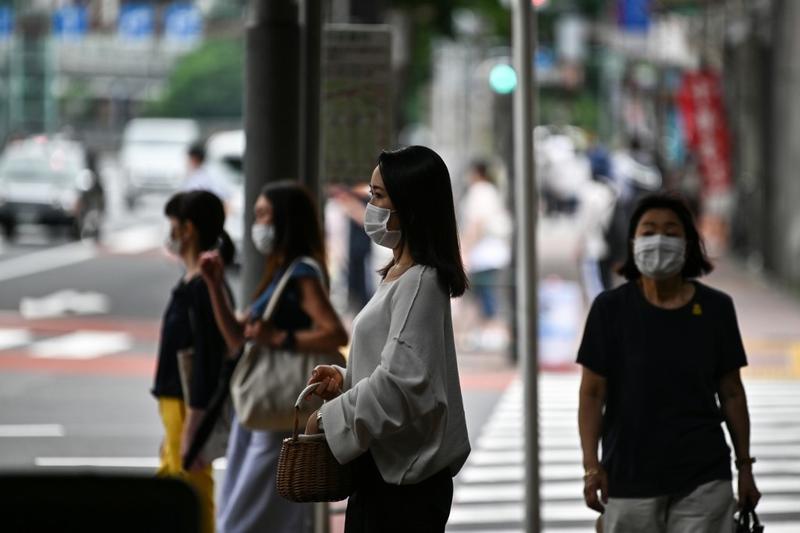 The relaxation will be applied to foreigners with the appropriate visas, including student visas, sequentially from countries where the novel coronavirus has subsided, Suga said, without saying which nationalities would be the first to be granted entry.

They will be required to test for coronavirus before they are allowed into the country. Tourists are still barred from entering Japan.

The restrictions imposed following the outbreak of the disease in Japan had prevented visa holders, including long-term residents, from re-entering.

The government later rolled back some to those measures to let existing visa holders, including permanent residents, return on condition they undergo coronavirus testing and self-quarantine for 14 days.

Entry will be limited to about 1,000 people a day, the Jiji news agency said.

The novel coronavirus has infected almost 32 million people and killed about 977,000 around the world.

Japan has so far managed to avoid the kind of explosive outbreak seen in hard-hit countries such as the United States and India, with 80,600 infections and 1,537 deaths.

Seeking to improve the sometimes uncomfortable process of getting a COVID-19 test, a Singapore company has developed an automated swab-testing robot which could also cut risks facing healthcare workers during the pandemic.

To use the SwabBot, a patient places their nostrils onto two disposable plastic nose pieces, which contain an extendable swab stick to collect samples from the nasal passageway.

The swab process is self-activated by pushing the chin against the machine and it has sensors to retract the swab stick if it encounters any sort of barrier or resistance.

The SwabBot was developed to make it more efficient to conduct mass testing during the pandemic.The machine must be cleaned, maintained and refitted with swab sticks by human hands, but the rest of the 20-second swab process is automated.

“We wanted something that would save manpower, and is less risky for healthcare workers. And we really didn’t expect the response to be so overwhelming,” said Professor Tan Ngian Chye of the NCCS, one of the project’s senior consultants.

The device only exists as a prototype, but Biobot has plans to produce at least 100 units and more depending on demand.

Biobot said it does not yet have a price for the SwabBot, but said there had been plenty of inquiries from potential clients locally and overseas.

This is not the first automated swab-testing robot; companies such as Taiwan’s Brain Navi have developed similar models.

A research team led by the University of Sydney will start to test a COVID-19 DNA vaccine in healthy Australians, according to the university.

The gene-based vaccine, developed by Australian biotech company Technovalia and its international vaccine partner BioNet, has been proved safe and effective in preclinical studies.

This phase 1 trial involving up to 150 healthy participants aged 18 to 75 years old in New South Wales, South Australia and Western Australia, will be the first DNA-based COVID vaccine trial in Australia.

Australia’s coronavirus hotspot state of Victoria looks set to lift some tough lockdown restrictions in coming days, after reporting only 14 new cases and eight deaths in the last 24 hours on Friday, further reducing the rate of infections.

The two-week average of new infections in the city of Melbourne has dropped below 26, well below the 30-50 level which the state has set as a precondition to ease curbs.

The country has logged just 869 coronavirus deaths and nearly 27,000 cases, of which only around 650 remain active.

While the Victorian capital Melbourne remains in lockdown, other states and territories have either no cases or very few local transmissions, resulting in state borders reopening.

Afghanistan on Friday reported 16 new COVID-19 cases, bringing the number of total cases in the country to 39,186, the country's Ministry of Public Health said.

No death was reported in the past 24 hours, with the death toll standing at 1,451, according to the statement.

A total of 32,619 people have recovered from the virus.

During the past 24 hours, 86,052 new cases were reported from across the country. Besides this 1,141 deaths were also recorded.

According to ministry officials, 4,756,164 people have been discharged from hospitals after showing improvement.

Iran reported 3,565 new COVID-19 patients overnight, raising the total number of confirmed cases in the country to 439,882 on Friday, according to Sima Sadat Lari, spokeswoman for Iran's Ministry of Health and Medical Education.

Besides, 369,842 people have recovered and been discharged from hospitals while 4,023 remain in intensive care units.

She said 24 Iranian provinces, out of 31, are in high-risk condition.

Iraqi authorities said on Thursday that the flights between Iraq and Iran will be suspended for 15 days.

A statement by the Iraqi Ministry of Transport said that the flights will be suspended from Sept. 25 to Oct. 9, in response to an official request from the Iranian Aviation Authority.

At an overnight meeting, the Israeli coronavirus cabinet, decided to tighten the anti-coronavirus measures on Friday. The measures will last at least until the evening of Simhat Torah, a major Jewish holiday, on Oct 10.

Under the new measures, all markets and businesses in Israel will be shut down except for factories and services defined as "essentials." Residents will be required to stay within 1,000 meters of their homes, except for an emergency.

Synagogues will be closed, except for Yom Kippur, the Day of Atonement, the holiest day in the Jewish calendar, which begins on Sunday evening. Throughout the lockdown, rallies and prayers will be limited to no more than 20 people.

Lebanon's total number of COVID-19 cases on Thursday surged by 1,027 to 32,805, in the highest daily rise in infections since the pandemic outbreak in February, while the death toll went up by one to 329.

The continued increase in COVID-19 infections has prompted the Lebanese Education Ministry to postpone the opening of public and private schools until Oct 12, in an attempt to curb the virus' spread. 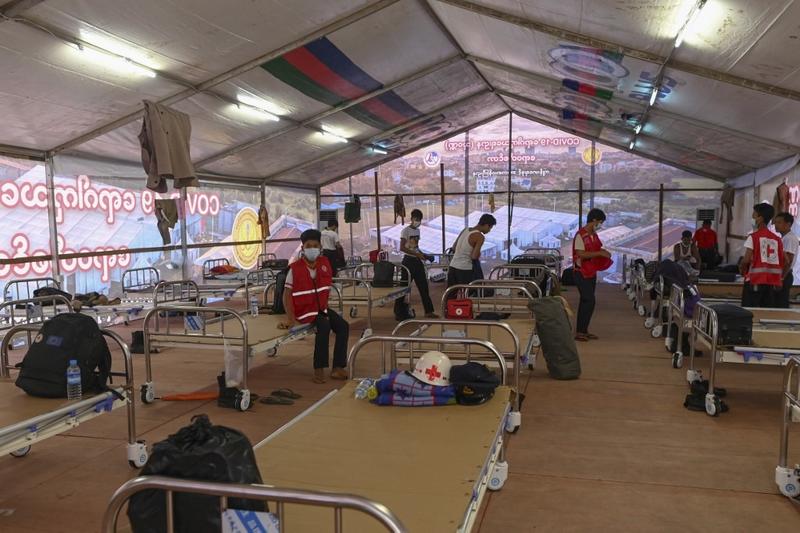 Myanmar red cross members take a rest inside their tent next to a new temporary shelter for coronavirus patients, on a football pitch in Yangon on Sept 19, 2020. (PHOTＯ / AFP)

Myanmar extended a ban on foreign visitors and domestic travel by a month to contain a record surge in coronavirus infections just weeks before the nation holds a general election.

The temporary suspension of international flights and foreign travelers will last through Oct. 31

Myanmar reported 171 new infection cases of COVID-19 with five more deaths on Friday morning, said a release from the Health and Sports Ministry. With the newly confirmed cases, the number of infection cases has risen to 8,515 so far.

The death toll has reached 155 while 2,381 patients have been discharged from the hospitals.

The Southeast Asian nation reported 1,052 infections Thursday, as its tally doubled the number in neighbouring Thailand, which has a bigger population.

One is an imported case detected in a managed isolation facility and the other is a community case, a female in her late teens who was already self-isolating. This person is a household contact, epidemiologically linked to the Auckland August cluster bereavement sub-group, according to the Ministry of Health.

The imported case is a man in his 40s who returned from Russia on a flight via Turkey and Malaysia on Sept 19. He returned a positive result to day 3 testing and is now at the quarantine facility in Auckland, said a ministry statement.

Palestine on Thursday reported 713 new cases in the Palestinian territories, raising the total number of COVID-19 infections to 47,830.

The Palestinian Health Ministry also reported five new fatalities from the COVID-19, bringing the death toll in the Palestinian territories to 322.

South Korea on Friday said it would impose tighter restrictions during the Chuseok autumn holiday weeks when people traditionally reunite with families, flagging the risks of new clusters of coronavirus infections.

The new curbs apply to at least 11 high-risk facilities in the densely populated Seoul metropolitan area, including nightclubs and bars.

The new measures will be in place from Sept 28 to Oct 11. Korea’s Hangul holiday, which memorializes when King Sejong introduced the language’s unique characters, is on Oct 9.

New cases have hovered at around 100 a day for more than two weeks after peaking at 441 amid an outbreak at a church last month. Many Koreans travel to their hometowns during the Chuseok holidays.

South Korea reported 114 more cases of the COVID-19 as of midnight Friday local time compared to 24 hours ago, raising the total number of infections to 23,455. 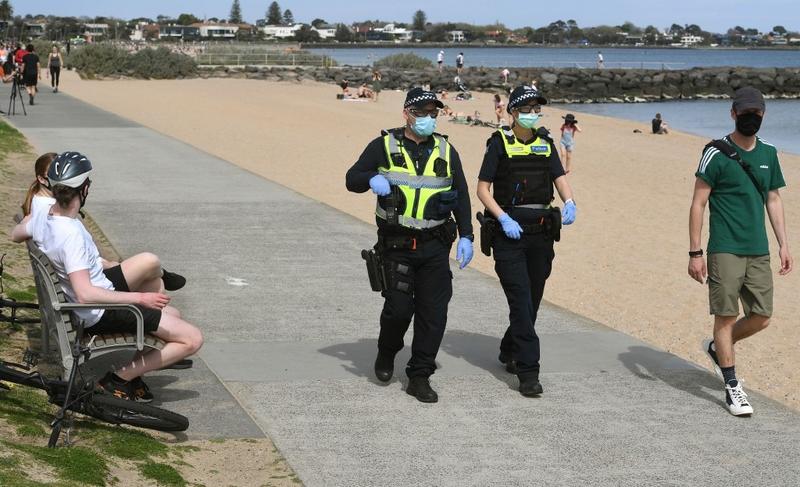 Police patrol Elwood Beach during an anti-lockdown protest in Melbourne on September 19, 2020. Melbourne continues to enforce strict lockdown measures to battle a second wave of the coronavirus. (WILLIAM WEST / AFP)

In Syria, a new batch of medical aid donated by a voluntary organization in the eastern Chinese province of Zhejiang was delivered to Syrian health authorities on Thursday. The aid includes face masks, goggles, protection suits and ventilators.

The number of confirmed COVID-19 cases in the Philippines surged to 299,361 after the Philippines' Department of Health (DOH) reported 2,630 new cases on Friday.

The Philippines' capital Metro Manila topped the regions in the country with the highest number of 1,091 new cases on Friday.

The Philippines expanded its vaccine search to 17 potential suppliers, hoping to close a deal within the second quarter of next year.

The UAE Ministry of Health and Prevention said 942 more patients recovered from the virus, taking the tally of recoveries in the UAE to 77,937, while the death toll rose by one to 407.

Health Ministry Director-General Noor Hisham Abdullah said in a press statement that four of the new cases are imported and 107 are local transmissions, most from the eastern state of Sabah, where a state assembly election will take place on Saturday.

Noor Hisham urged voters in Sabah to conduct the voting while observing the standard operating procedure issued by the health authorities.

Health authorities also detected one new case cluster, traced to the crew of a ship docked in the southern Johor state, with two testing positive so far.

Another 30 patients have been released after recovery, bringing the total cured and discharged cases to 9,696, or 90.7 percent of all cases.

Of the remaining 858 active cases, four are being held in intensive care units and three of those are in need of assisted breathing.

No new deaths have been reported, leaving the total deaths at 133.

Thailand's Ministry of Tourism and Sports on Friday said that if the first batch of inbound tourists in October is clear of COVID-19 infections, then the ministry will reduce the quarantine period from 14 days to seven days.

He said that Oct 1 will be the first day in almost six months for Thailand to allow long-stay visitors to enter the country.

The official data showed 12,473 samples were tested in the last 24 hours across Bangladesh.

The total number of recovered patients in the country stood at 267,024, including 1,932 new recoveries on Friday, said the DGHS.

According to the official data, the COVID-19 fatality rate in Bangladesh is now 1.43 percent and the current recovery rate is 74.85 percent.

Bangladesh recorded the highest daily new cases of 4,019 on July 2 and the highest number of deaths of 64 on June 30.