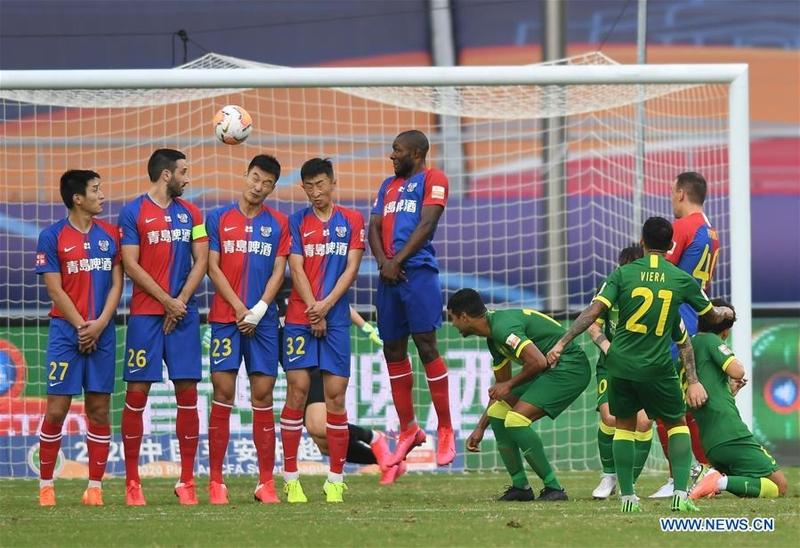 SUZHOU, China - Beijing Guoan secured the top four place in Group B after completing a 5-1 victory against Qingdao Huanghai, while Hebei China Fortune beat Tianjin Teda 1-0, putting the latter at the bottom of Group B in the 12th round of the Chinese Super League (CSL) here on Tuesday.

Beijing Guoan now sits second in Group B with 25 points, with two rounds in the first stage remaining, and has booked a spot in Group C for the championship race

Guoan suffered criticism after earlier fumbling a 3-0 lead against Qingdao, suffering instead a 3-3 tie in the first leg.

In Tuesday's match, Guoan was up by three goals before the interval, with goals from Yu Yang, Jonathan Viera and Fernando Lucas Martins.

Qingdao went one player down eight minutes after the break as Yin Yaji collected his second yellow card.

Viera bagged his second with a stunning free kick in the 56th minute, before Cedric Bakambu added the fifth in the 85th minute.

Qingdao scored the consolation goal from Denis Popovic's penalty in the dying minutes.

The only down side for the capital-based team was that Renato Augusto limped off with an injury and the Brazilian is suspected of suffering a muscular problem.

Guoan now sits second in Group B with 25 points, with two rounds in the first stage remaining, and has booked a spot in Group C for the championship race.

In other action, Hebei and Tianjin lost several chances to take a lead in the first half, when Hebei forwards Buya Turay and Markao failed to score in succession in the eighth minute, and Tianjin's 21-year-old midfielder Liu Ruofan missed three times in a row.

The second half seemed to end in a draw, especially when both sides nearly ran out of stamina with more mistakes. Thanks to defender Ding Haifeng's accurate pass, Markao made a final hit for the Hebei side with a powerful header in the 91st minute.