Deep divisions as Afghan negotiators get down to details 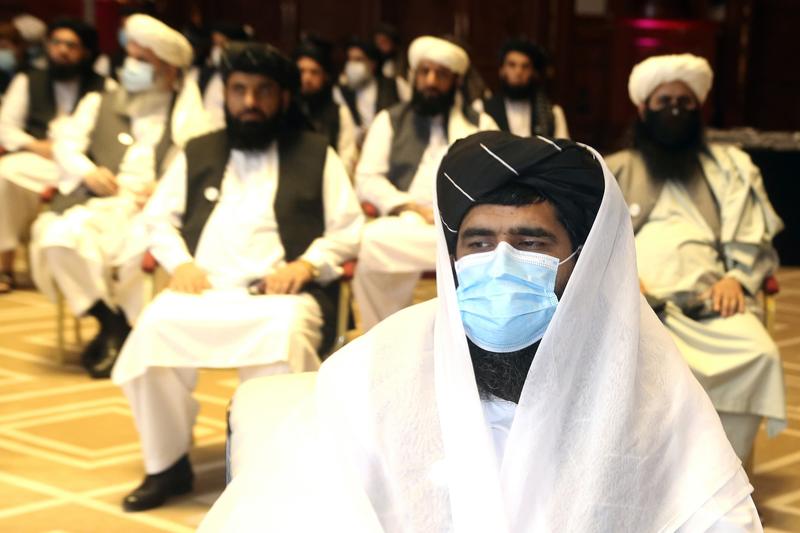 A member of Taliban negotiation delegation, keeps his face mask during the opening session of the peace talks between the Afghan government and the Taliban in Doha, Qatar, Sept 12, 2020. (HUSSEIN SAYED / AP)

KABUL  - The Afghan government and Taliban militants remain far apart on even the most basic issues a week into talks meant to end two decades of war that has killed tens of thousands of people.

The two sides will have to tackle a diverse range of issues to secure peace, from the legitimacy of the Kabul government to women’s rights

The chasm, not just on the predictably thorny problem of a ceasefire but on foundational issues, suggests major hurdles to any hopes of binding the wounds of a ravaged country.

Despite the difficulties, the talks are the best hope for peace in years and come as a result of a February pact between the Taliban and the United States, allowing US forces to withdraw in exchange for Taliban promises on terrorism.

But the Taliban have refused to agree to a ceasefire and the war is grinding on. About 40 people were killed in Taliban attacks last week.

With all foreign troops due to be gone by May next year, pressure is building on the US-backed government as it grapples with how it can share power with its implacable foe or contend with a likely Taliban push for military victory.

Since the spotlight faded from the lavish Sept 12 opening ceremony in a hotel ballroom in the Qatari capital, Doha, attended by US Secretary of State Mike Pompeo, the two sides have only confirmed that they are diametrically opposed on virtually every issue.

“We are talking to a side that is difficult and inflexible and therefore things are not moving forward,” said a senior negotiator on the Afghan government side.

The two sides will have to tackle a diverse range of issues to secure peace, from the legitimacy of the Kabul government to women’s rights.

“The first week has demonstrated how complex the talks will be in general, with the most crucial one being Afghanistan’s future political system,” said Graham Smith, an independent analyst tracking closely the talks based in Afghanistan.

The Taliban emerged in the early 1990s from the chaos of factional strife between the Islamists who had battled occupying Soviet forces in the 1980s.

Founded by religious students, the Pakistan-backed fighters brought a welcome but harsh peace, along with contempt for women’s rights, blocking their education, forcing nearly all to quit work, restricting their movement and brutally enforcing a strict dress code.

In recent months, the Taliban have said they will respect women’s rights under sharia but many educated woman who have come of age since the Taliban were ousted in 2001 for harbouring al Qaeda leader Osama bin laden have doubts.

Women could be the first casualty of the talks, some activists fear, if the government allows the rolling back of their rights to appease the Taliban.

Three diplomats overseeing the so-called intra-Afghan negotiations told Reuters the talks had bogged down over the finer points of Islamic law.

READ MORE: Taliban tell Afghan government they have no aim to seize power

The government and Taliban both follow the Hanafi school of jurisprudence within Sunni Islam, but their interpretations of sharia law are “staunchly different”, said a senior Western diplomat in Doha who declined to be identified due to the sensitivity of the talks.

This affects positions on key issues like punishments for crime, women’s rights and freedom of speech.

President Ashraf Ghani’s spokesman questioned what he said was the Taliban insistence on settling the issue of the Islamic system so early in the talks.

“This doesn’t resonate well with our people’s wish for a lasting peace and the current political system of Afghanistan which is an Islamic Republic state and has legitimacy,” said the spokesman, Sediq Sediqqi.

One of the diplomats trying to shepherd the talks said the focus was for now on keeping the negotiators at the table, talking over tea in the Gulf capital, 2,000 km from their war-scarred home.

“They’re carving up their playing field, the challenge for us is to make sure that no one leaves the field,” said the diplomat.