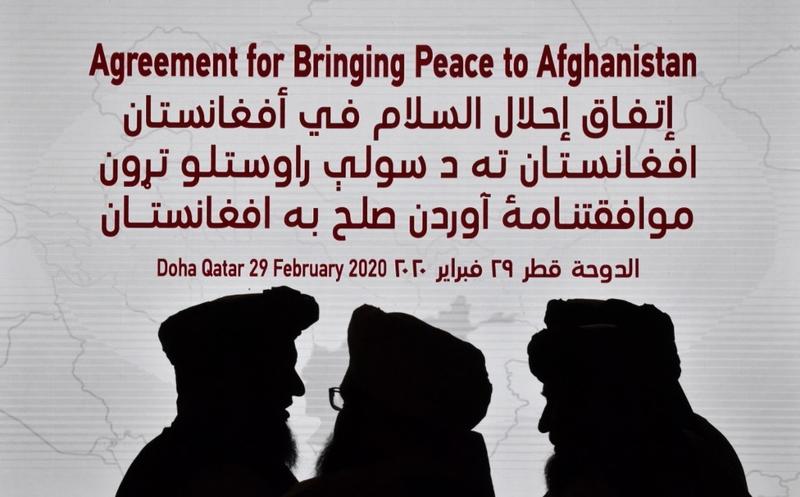 In this Feb 29, 2020 photo, members of the Taliban delegation gather ahead of the signing ceremony with the United States in the Qatari capital Doha. (GIUSEPPE CACACE / AFP)

UNITED NATIONS - Ties between the Taliban, especially its Haqqani Network branch, and al Qaeda remain close, independent UN sanctions monitors said in a report made public on Monday, despite a US-Taliban pact Washington hoped would sever them.

Under the Feb 29 US-Taliban deal, the Taliban promised to prevent al Qaeda from using Afghan soil to threaten the security of the US and its allies

“The Taliban regularly consulted with al Qaeda during negotiations with the United States and offered guarantees that it would honor their historical ties,” they said in a report to the UN Security Council, saying ties stemmed from friendship, intermarriage, shared struggle and ideological sympathy.

Under the Feb 29 US-Taliban deal that could pave the way toward a full withdrawal of foreign soldiers from Afghanistan, the Taliban promised to prevent al Qaeda from using Afghan soil to threaten the security of the United States and its allies.

The deal also committed the United States to reduce its military footprint in Afghanistan to 8,600 troops by mid-July - a level US and NATO officials said it had nearly reached last week - and, conditions permitting, to zero by May 2021.

US forces invaded Afghanistan to topple the Taliban in 2001 after the Sept 11 attacks that killed nearly 3,000 people. The Taliban had provided a safe haven in which al Qaeda planned the attacks.

“The success of the agreement may depend upon the Taliban’s willingness to encourage al Qaeda to put a stop to its current activities in Afghanistan,” the UN monitors said, saying if the Taliban honored the pact, “it may prompt a split between pro - and anti-al-Qaeda camps.”

US Special Representative for Afghanistan Reconciliation Zalmay Khalilzad said he believed the report covered the period through March 15, about two weeks after the US-Taliban pact, and it may take time for the Taliban to deliver.

“They have taken some steps. They have to take a lot more,” he told reporters, saying if the Taliban failed to keep its promises, Washington could reconsider its own.

“We are in a good place,” Khalilzad said, adding that levels of violence in Afghanistan have remained relatively low since May’s Eid al-Fitr ceasefire. “We are optimistic that finally we’re moving forward to the start of the intra-Afghan negotiations.”