By Xu Wei In Beijing and Wang Xu in Tokyo 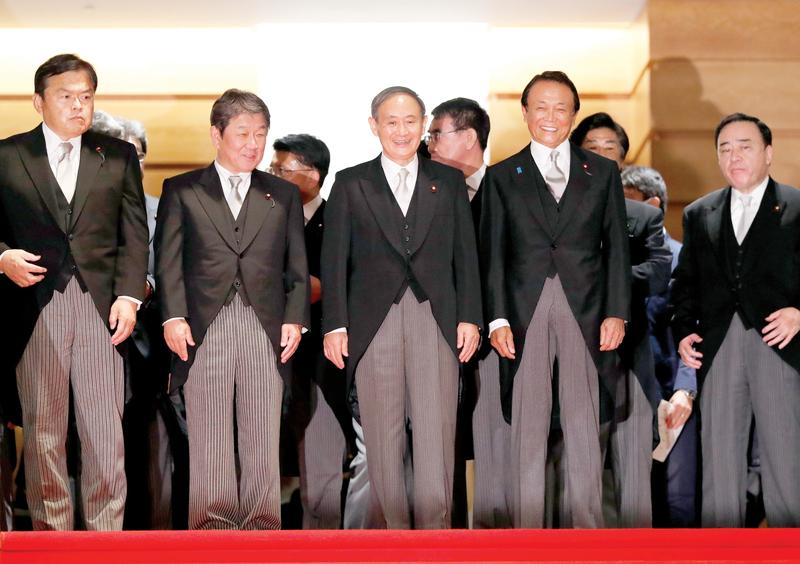 New Japanese Prime Minister Yoshihide Suga (center) and his Cabinet members prepare for a group photo at the PM’s office in Tokyo on Sept 16. (PHOTO / XINHUA)

President Xi Jinping sent a congratulatory message to Yoshihide Suga on his election as prime minister of Japan on Sept 16, saying the two countries should forge a bilateral relationship that is consistent with the needs of the new era and benefits the two nations and peoples.

In the message, Xi said a long-term, stable, friendly and cooperative relationship between China and Japan, as friendly neighbors and important countries in Asia and the world, fits with the fundamental interests of the two peoples.

A healthy bilateral relationship also helps with the peace, stability and prosperity of both Asia and the world, he said.

The two sides should abide by principles set by the four political documents and the four-point principled agreement between the two nations and make positive contributions to global peace and common development, he said.

China stands ready to work with Japan to step up friendly exchanges and pragmatic cooperation in various areas and work toward greater progress in bilateral relations, Li said.

South Korean President Moon Jae-in has told Japan’s new prime minister in a letter that he was willing to sit down anytime in a bid to improve ties strained by historical and economic disputes, Moon’s office said on Sept 16.

Kang Min-seok, a spokesman of the presidential Blue House in Seoul, told a briefing: “Our government plans to cooperate actively with the Suga administration to wisely overcome issues of past history and reinforce practical cooperation.”

Suga was named Japan’s new prime minister following a vote in the country’s parliament on Sept 17, succeeding Shinzo Abe as the leader of the world’s third-largest economy. He was picked as leader of Japan’s ruling Liberal Democratic Party on Sept 14 with about 70 percent of the votes.

Da Zhigang, a researcher on Japanese studies at Heilongjiang Provincial Academy of Social Sciences, wrote in a signed article online that stability may remain a policy priority for Suga in his diplomatic policies with China.

“Suga’s basic consideration in relations with China may be amplifying the positive legacy left behind by Abe in Japan-China relations,” he said.

After becoming Japan’s first new leader in almost eight years, the 71-year-old son of a strawberry farmer pledged to do his utmost to contain the pandemic and deal with its economic fallout, which led to the country’s worst contraction in modern times.

In a sign that Suga will put a high priority on political stability and continuity, he chose half of the new Cabinet from carry-overs in Abe’s administration, with several major posts remaining unchanged.

“The new Cabinet showed Suga’s solicitude for his allies,” said Yuzo Tanaka, a professor of economics at Ryukoku University in Kyoto. “The point is whether they can face up to a plethora of challenges including tackling COVID-19 while reviving a battered economy and dealing with a rapidly aging and declining population.

“There is only a short window for Suga to offer results and it will decide whether he will be a long-term leader or just an interim one,” Tanaka added.