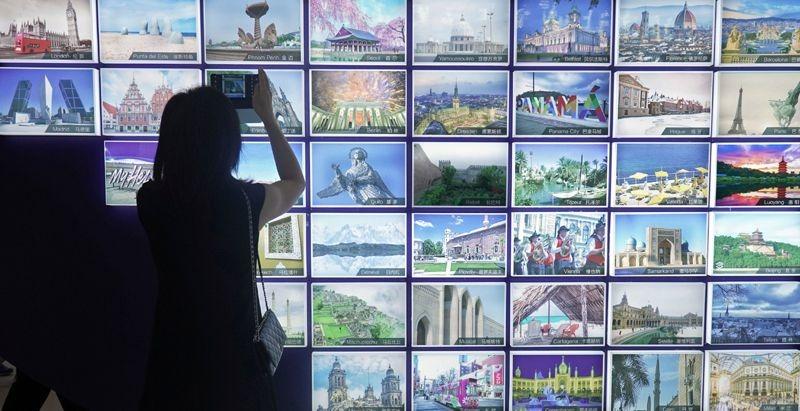 A visitor views a picture featuring world-famous tourist sites at the recent China International Fair for Trade in Services in Beijing. (PHOTO / XINHUA)

China's rapid containment of COVID-19 and subsequent economic recovery offer hope to the global tourism industry that has been hit hard by the pandemic.

China is the world's largest outbound-travel source market, skyrocketing from 4.5 million outbound travelers in 2000 to 170 million in 2019

"China has become one of the fastest-growing source markets for Poland. We hope that more Chinese can visit our country once the pandemic is contained," Zuzanna Gutkowska, acting director of the Polish National Tourist Office in Beijing, said on the sidelines of the recent China International Fair for Trade in Services.

Since Frederic Chopin is a household name in China, the Polish tourism industry plans to introduce more tourism packages featuring the pianist's belongings to attract Chinese visitors, she says.

China is the world's largest outbound-travel source market, skyrocketing from 4.5 million outbound travelers in 2000 to 170 million in 2019.

Many countries have introduced various measures and incentives, including long-term visas and adopting Alipay and WeChat Pay, to entice Chinese.

The United Nations recently projected international tourist numbers may decline by between 58 percent and 78 percent year-on-year in 2020, while tourism revenue will drop by US$910 billion to US$1.2 trillion.

As one in 10 people work in the tourism sector worldwide, the unprecedented crisis threatens the well-being of millions. Over 100 million tourism jobs may be lost, while unemployment in countries heavily reliant on tourism may spike by more than 20 percent, UN Secretary-General Antonio Guterres said in August.

Some Chinese have resumed traveling and retail spending in recent months. While the domestic tourism market is steadily recovering, outbound travel may not be too far behind after the global pandemic subsides and borders reopen, Li says.

China Tourism Academy director Dai Bin says the pandemic will lead to some changes in people's travel habits, which travel agencies should pay attention to.

In a post-pandemic world, independent travel and smaller group tours will be popular since cautious people may hesitate to take large group tours or cruises, Dai says.

Some experts also point out that, in addition to strengthening global cooperation and stimulating demand for travel, countries should also use modern technologies, such as big data, to upgrade the industry and promote high-quality development.