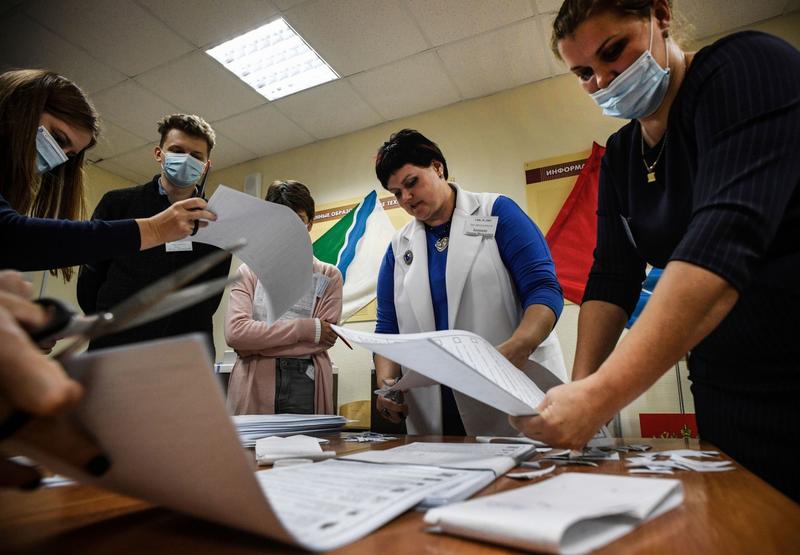 Members of a local electoral commission count ballots at a polling station in Siberian city of Novosibirsk, on Sept 13, 2020.  (ALEXANDER NEMENOV / AFP)

Kremlin-backed candidates swept most major contests in Russian regional elections over the weekend but supporters of opposition leader Alexey Navalny claimed wins in two Siberian cities, including the one where he was poisoned last month.

“The authorities have shown they control the situation in the country,” said Alexei Makarkin, deputy director of the Center for Political Technologies in Moscow. “But the opposition’s performance proves there’s a desire for political change in major cities.”

Russians voted for representatives at different levels of government in 83 regions including 18 governors over three days ending Sunday, in a key test of support for President Vladimir Putin ahead of next year’s parliamentary elections.

The latest contests took place amid unprecedented anti-government protests in neighboring Belarus and daily demonstrations in Russia’s eastern Khabarovsk region over the July arrest of a popular governor from outside the ruling party.

Even as his popularity hit a record low earlier this year amid the economic dislocation of the pandemic, Putin, 67, pushed through constitutional changes in July that allow him to extend his two-decade rule to as long as 2036. His poll ratings picked up last month as the coronavirus epidemic eased in Russia.

Opposition leader Navalny was working to build support for candidates running against the ruling United Russia party when he fell victim in Tomsk, Siberia, last month to what German doctors later identified as poisoning by the military nerve agent Novichok. He emerged last week from a coma in a Berlin hospital, where he’d been flown for treatment.

Navalny’s allies proclaimed victories in city-council races in Tomsk and Novosibirsk, where he had filmed videos. United Russia party candidates won only 8 of 27 single mandates in the Tomsk race.

“This completely destroys the whole myth about ‘2 percent of liberals’ and that they ‘only have support of hipsters inside the Garden Ring’” road of Moscow, said Leonid Volkov, a top Navalny ally.

Still, United Russia swept gubernatorial elections where opponents were challenging the incumbent. In Krasnodar, governor Veniamin Kondratyev won with 85 percent of the vote versus around 7 percent for his Communist challenger. In Irkutsk, a Siberian region hit by disastrous flooding last year, Igor Kobzev defeated a Communist former intelligence officer who had local backing, winning 60 percent of the vote.

Navalny has built a following of millions with online videos exposing high-level corruption in Russia. Despite pressure from European leaders, Russia has so far failed to investigate the case, asserting it has no evidence the 44-year-old campaigner was poisoned.

Navalny had appealed to voters to adopt his “smart voting” initiative to support the politician in each area with the best chance of defeating the United Russia candidate. The ruling party lost a third of its seats when the tactic was promoted in last year’s Moscow city council elections.

Election monitors said the decision to hold voting over three days made fraud harder to detect. Authorities said there were no major reports of irregularities.