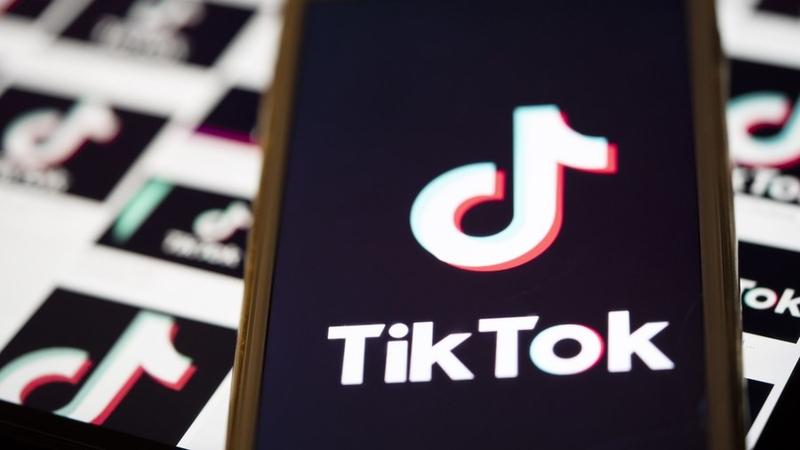 The logo of TikTok is displayed on the screen of a smartphone on a computer screen background in Arlington, Virginia, the United States, Aug 3, 2020. (LIU JIE / XINHUA)

LOS ANGELES - Video-sharing social networking company TikTok on Monday filed a lawsuit against the Trump administration over an executive order banning any US transactions with its parent company ByteDance.

In the 39-page indictment acquired by Xinhua, US President Donald Trump, Secretary of Commerce Wilbur Ross and US Department of Commerce were listed as defendants.

According to the document, TikTok accused the US authorities of stripping the rights of the company without any evidence to justify the extreme action, and issuing the order without any due process as guaranteed by the Fifth Amendment while banning the company with no notice or opportunity to be heard.

In the document, TikTok cited remarks from Trump about this issue, such as proclaiming in a campaign-style news conference that TikTok had "no rights" and that he would ban the popular software if the company did not pay money to the government to secure the its approval for any sale. Those words are unconstitutional.

"By demanding that Plaintiffs make a payment to the U.S. Treasury as a condition for the sale of TikTok, the President has taken Plaintiffs' property without compensation in violation of the Fifth Amendment," the document reads.

ALSO READ: TikTok defends itself against digital gunboat attack of US

According to the indictment, by preventing TikTok from operating in the United States, the executive order violates the company's First Amendment rights in its code, an expressive means of communication.

The Los Angeles-based tech firm argued that the executive order is a misuse of the International Emergency Economic Powers Act (IEEPA), authorizing the prohibition of activities that have not been found to be "an unusual and extraordinary threat" in this case.

According to the document, TikTok accused US authorities of stripping the rights of the company without any evidence to justify the extreme action, and banning the company with no notice or opportunity to be heard

TikTok argued that former presidents used power authorized by IEEPA to protect the country from threats from abroad, including terrorism and the proliferation of weapons of mass destruction, but this executive order seeks to use IEEPA against a US company with hundreds of employees across the country and to destroy an online community sharing video content by millions of Americans.

According to the company, as of June 2020, the total number of monthly active users in the country soared to 91,937,040, and based on quarterly usage, 100 million Americans used the application to express themselves and connect with each other.

The plaintiffs, TikTok Inc and ByteDance Ltd, are seeking a declaratory judgment and order invalidating and enjoining the executive order and any implementing regulations issued by the Department of Commerce later.

"The President's executive order is unconstitutional and ultra vires, and must be enjoined," the document reads.

The company said it strongly disagreed with the Trump administration's position that TikTok is a threat to national security and had voiced these objections previously.

In the last two years, US officials have repeatedly spread their rumors, saying that since TikTok was owned by Beijing-based tech firm ByteDance, it could pass on data it collects from Americans' streaming videos to the Chinese government.

TikTok has said it has not been asked to share data with the Chinese government.

"There is no connection between TikTok and the Chinese government. Nor does the Chinese government exert any control over TikTok through ByteDance," the company said. "The key personnel responsible for TikTok, including its CEO, Global Chief Security Officer, and General Counsel, are all Americans based in the United States."

TikTok's US content moderation is likewise led by a US-based team and operates independently from China, and the popular application stores US user data on servers located in the United States and Singapore, the company reiterated.

The company complained that it had provided these proofs to the US authorities many times. However, all of the efforts were dismissed crudely by the latter, thus it had to file the lawsuit.

"Now is the time for us to act. We do not take suing the government lightly; however we feel we have no choice but to take action to protect our rights, and the rights of our community and employees," the company said in a blog posted on its official website Monday morning.

The order is "a gross misappropriation of IEEPA authority and a pretext for furthering the President's broader campaign of anti-China rhetoric in the run-up to the U.S. election," according to the indictment

It also suggested that the Trump administration had imposed the extreme tough restrictions on the company based on a political motive.

The executive order was issued "for political reasons rather than because of an 'unusual and extraordinary threat' to the United States, which is a condition for the President to exercise his authority" under the IEEPA, TikTok noted.

The order ignored the express limitations in the IEEPA barring executive actions from restricting personal communications or the transmission of informational materials, TikTok said in the document, adding that the order also swept broadly to ban any transactions with ByteDance, even though the purported target is the TikTok mobile application, which is just one of ByteDance's several businesses.

"The order is thus a gross misappropriation of IEEPA authority and a pretext for furthering the President's broader campaign of anti-China rhetoric in the run-up to the U.S. election," the document reads.

Trump's suggestion of ByteDance paying a fee to the US government for facilitating a deal to sell TikTok to a US company also showed that the regulatory move is a politicized one, lawyers said in the lawsuit, adding that the fee is unnecessary.

"The President's demands for payments have no relationship to any conceivable national security concern," the lawyers added.

"There is absolutely no evidence that TikTok poses a threat to US national security. The claim is based on speculation that any mobile device with a Chinese app can be used to spy on Americans," Gary Hufbauer, a former US Treasury official and nonresident senior fellow at the Peterson Institute for International Economics, told Xinhua.

Other business insiders in the United States have similar insights into the White House's executive orders against the Chinese entertainment platform and big internet companies like TikTok and WeChat.

READ MORE: US firms fear losing out with app bans

A group of WeChat users also sued the Trump administration over the executive order banning transactions with WeChat on Friday in San Francisco, a lawyer familiar with the issue said

"By trying to block access to TikTok and WeChat, with claims that China is surveilling its users in America, Donald Trump is seeking to violate America's First Amendment right to free speech," the head of a prominent Hollywood production company told Xinhua on Monday, who asked not to be named for fear of reprisal against him and his company by the Trump administration.

However, the wording in the order is vague and broad, and it is unclear if companies could be in violation if they use WeChat for messaging, for promoting their products or services, or accepting payments, legal experts said.

A group of WeChat users also sued the Trump administration over the executive order banning transactions with WeChat on Friday in San Francisco, a lawyer familiar with the issue told Xinhua via WeChat Monday.

The group is not affiliated with WeChat or its owner Tencent, and seeks to block the president's Aug 6 order which the group said is unconstitutional because it violates users' due process and free speech rights.

The Chinese Foreign Ministry has expressed support for companies including TikTok to take up legal weapons to defend their legitimate rights and interests.

The ministry's spokesperson said some US politicians are working to crush such Chinese companies as TikTok, WeChat and Huawei because they are down with an anti-China syndrome and will strike at anything Chinese.

"This is a repudiation of the principle of market economy and fair competition that the United States has always boasted about. This is trampling on international rules and disrupting exchanges and cooperation in science, technology and innovation riding the trend of globalization," Zhao said.

The world will "only see more clearly the true face of these self-serving bandits-like politicians," he added.