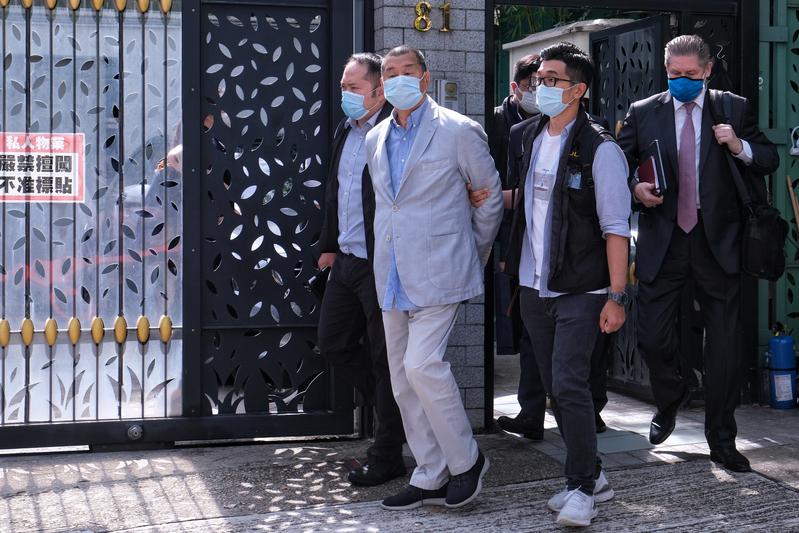 According to the Hong Kong Police Force, at least 10 suspects aged between 23 and 72 were arrested on Monday on suspicion of collusion with external forces to endanger national security, conspiracy to defraud and other offenses. Investigation is still underway and further arrests may be made.

Hong Kong media said Lai, an instigator of the Hong Kong riots, was among those arrested.

Police also entered and searched the office of Next Digital -- Lai’s media firm -- at Tseung Kwan O Industrial Estate in accordance with a court warrant. Police said officers had shown and explained the warrant to the staff in the building and asked for cooperation.

According to Schedule One of the Implementation Rules for Article 43 of the National Security Law, police may apply to a magistrate for a warrant to enter and search a place for investigating an offense endangering national security.

Briefing the media on Monday night, Senior Superintendent Steve Li Kwai-wah, from the new National Security Department, said that three arrestees, two males and one female, are responsible for the daily operation of the group, which is suspected of colluding with foreign powers over the past year.

Another three suspects, all of whom are Apple Daily senior executives, were arrested on suspicion of making use of a foreign bank account to provide financial support to the group, according to Li.

“This group is not simply publishing an online post to urge foreign countries to impose sanctions against Hong Kong,” Li said. “There is evidence proving they have done actual deeds.”

Li said that the group was active even after the enactment of the National Security Law for Hong Kong on June 30. It was reported that opposition activist Agnes Chow Ting is among the those arrested. Chow confirmed her arrest on her social network account.

Li added that six Apple Daily employees were arrested on suspicion of conspiracy to defraud, and that two of them were also charged with “collusion with foreign and external forces to endanger national security”.