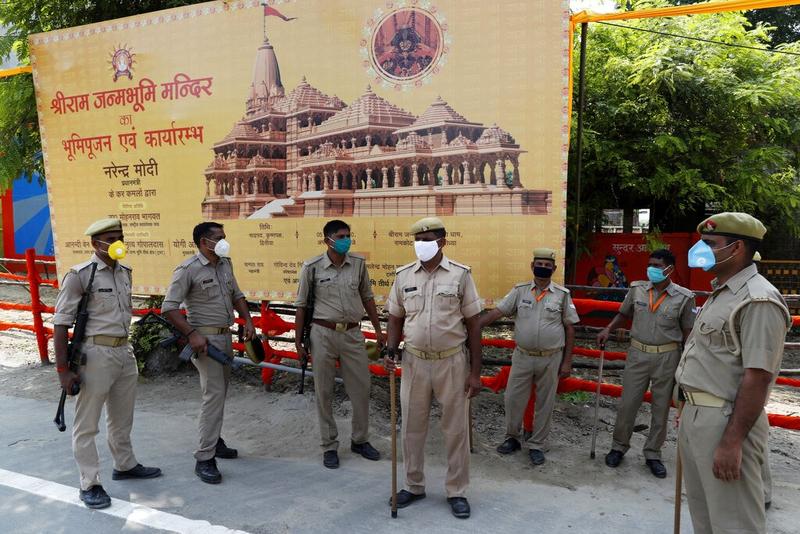 Policemen stand guard ahead of a groundbreaking ceremony for a Hindu temple in Ayodhya, in the Indian state of Uttar Pradesh, Aug 4, 2020. (RAJESH KUMAR SINGH / AP)

LUCKNOW - In a gesture of reconciliation, two prominent Muslims who lived through deadly riots following the razing of a mosque in northern India in 1992 plan will attend the foundation-laying ceremony for a Hindu temple on Wednesday on the same site, they said.

Prime Minister Narendra Modi, whose Hindu nationalist party has been leading the demand for a temple there dedicated to the god-king Ram, is expected to be the chief guest at the event in Ayodhya town.

Construction was made possible by a verdict late last year from the Supreme Court of India awarding the disputed site to the Hindus, and the planned visit by the two well-known Muslims underscored an easing of animosity between followers of the two religious faiths in one of Hindu-majority India’s most communally sensitive regions.

“Whatever happened are things of the past,” said Iqbal Ansari, one of the Muslim litigants. “I’ve been invited and I think it’s the wish of Lord Ram and I am going to attend it.”

Mohammad Sharif, another Muslim honored with one of India’s highest civilian awards for doing the last rites of unclaimed bodies since the riots, told Reuters he too had got an invitation and was keen to be there.

In 1992, a Hindu mob destroyed the 16th-century Babri Mosque on the site, triggering clashes in which about 2,000 people, mostly Muslims, were killed across the country. Hindus believe the site is the birthplace of Lord Ram, a physical incarnation of the Hindu god Vishnu.

The area, situated about 687 kilometers southeast of New Delhi, was filled with the sounds of vedic hymns ahead of the groundbreaking ceremony.

Barricades have been put up across the town with heavy police presence, as authorities try to limit the number of visitors to maintain social distancing. At least two priests in the area and four policemen have tested positive for COVID-19.

Still, nearly 200 people are likely to be there at the event, including 135 saints and priests from Nepal.