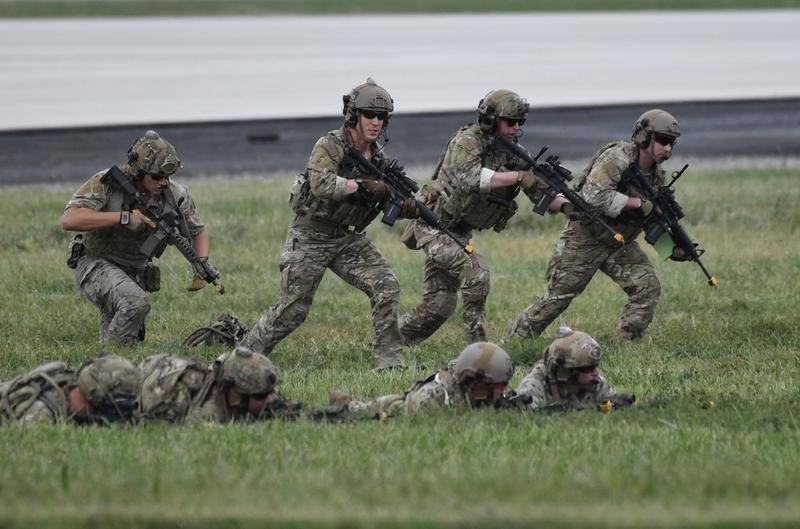 US soldiers participate in a military tactical demonstration during "Air Power Day" preview at US Osan Air Base in Pyeongtaek, the Republic of Korea, on Sept 20, 2019. (JUNG YEON-JE / AFP)

SEOUL - The Republic of Korea (ROK) and the United States are trying to agree on the scale, scope and timing of annual military exercises with the novel coronavirus threatening to disrupt the travel of US troops, ROK officials said on Tuesday.

ROK's Defense Minister Jeong Kyeong-doo and US Defence Secretary Mark Esper had a telephone call on Tuesday but could not decide on details of the exercises, which usually begin in early August, officials said.

US Forces Korea (USFK) has reported nearly 50 cases of the coronavirus among its troops, employees and their families in the past three weeks, including 10 on Monday

US Forces Korea (USFK) has reported nearly 50 cases of the coronavirus among its troops, employees and their families in the past three weeks, including 10 on Monday. All were confirmed upon arrival or while in two-week mandatory quarantine.

“We’ll watch developments to determine the scale, date and methods of the exercises,” said a ROK official who declined to be identified, citing the diplomatic sensitivity of the issue.

“We have to do what is necessary, but safety is also key to maintaining defence readiness posture,” the official said, suggesting the exercises could involve more simulations and less field training.

The spike in coronavirus cases linked to US forces has raised concern in ROK. The city of Pyeongtaek, home to a big US base, has asked the ROK government to ensure that all US soldiers get tested before their arrival.

The possible disruption of the exercises comes at a sensitive time.

US President Donald Trump has questioned the value of the drills and in 2018 even suggested to the Democratic People's Republic of Korea's leader Kim Jong-un that he would end them.

Jeong and Esper did not discuss any withdrawal of US soldiers, the ROK official said, dismissing as “groundless” a recent Wall Street Journal report that the Pentagon had offered the White House options to reduce the US military presence in ROK.