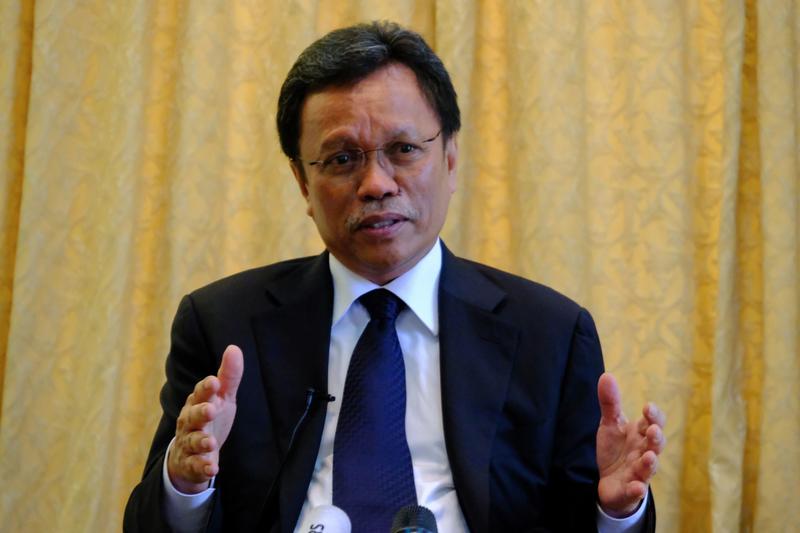 Shafie Apdal, head of the Warisan Party, gestures as he speaks during an interview in Kuala Lumpur, Malaysia on July 14, 2020. (PHOTO / BLOOMBERG)

KUALA LUMPUR - Malaysia’s opposition is preparing for early elections after a crucial vote in the lower house this week showed Prime Minister Muhyiddin Yassin may lack a parliamentary majority, said Mohd Shafie Apdal, a potential rival for the premiership.

Muhyiddin on Monday succeeded in his bid to replace the speaker of parliament’s lower house by a margin of two votes. But he fell one vote short of a simple majority with only half of the 222 lawmakers in the house voting for his motion.

“It is not even a simple majority. It is clear that it is a hung parliament,” Mohd Shafie told a group of reporters on Tuesday.

“Elections are not far away, it’s just around the corner,” he said, anticipating Malaysia would hold a national election well before it falls due in 2023.

He said the tabling and parliamentary vote on the 2021 budget in November would be another crucial test for the government.

Elections are not far away, it’s just around the corner.

Southeast Asia’s third-largest economy has been grappling with political uncertainty since Muhyiddin was unexpectedly made prime minister in March by forging an alliance with the graft-tainted UMNO party that was defeated in a 2018 election.

The opposition, which now includes his predecessor Mahathir Mohamad, has accused Muhyiddin of grabbing power by shifting allegiances instead of earning it at the ballot box, and has vowed to oust him.

However, the opposition has been fighting over who should be their prime ministerial candidate. Ninety-five-year-old Mahathir and his ally-turned-foe Anwar Ibrahim have both declared their intentions to be the bloc’s candidate, but Mahathir later threw his support behind Mohd Shafie.

A long-time UMNO stalwart, Shafie was suspended from the party in 2016 for questioning the then-prime minister Najib Razak over his handling of the 1MDB scandal. He later quit the party to form his own party based in his home state of Sabah in Malaysian Borneo, and became the state’s chief minister after the 2018 polls.

Mohd Shafie said he was still weighing whether to be a candidate, and has received messages of support from some lawmakers in Anwar’s party.

The opposition needs to work harder to show a united front and present clear economic policies to recover from the coronavirus pandemic to win over voters in any election, he said.

Should he be named the opposition’s candidate for prime minister, Mohd Shafie would be the first from outside Peninsular Malaysia, the traditional centre of political power and economic development.

East Malaysia on the island of Borneo contributes more than two-thirds of the country’s oil and gas reserves. It is made up of Sabah and Sarawak - among the country’s poorest states - which have long demanded more autonomy and a greater share of the energy revenues.

Sarawak’s ruling Gabungan Parti Sarawak coalition is aligned with Muhyiddin’s administration, and with 18 lawmakers is seen as a kingmaker.

The chief of Malaysian energy giant Petronas quit last month after a disagreement with the prime minister over giving more oil money to Sarawak, sources have told Reuters. Critics have said Muhyiddin was offering the state more oil revenues to gain its support.