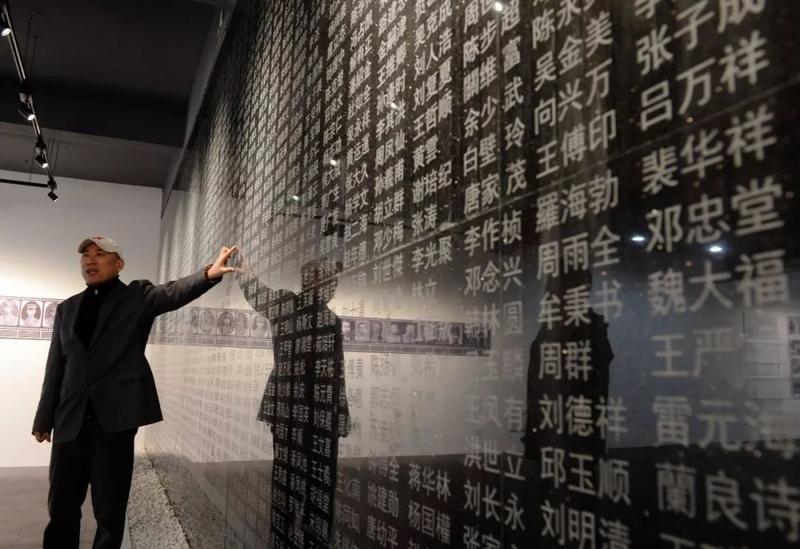 Wu Xianbin, curator of a private museum commemorating the War of Resistance Against Japanese Aggression (1931-45), introduces a wall with the names of Chinese martyrs on the second floor of the facility. (CUI XIAO / FOR CHINA DAILY)

NANJING－About half an hour's drive from downtown Nanjing, capital of East China's Jiangsu province, lies a four-story museum commemorating the War of Resistance Against Japanese Aggression (1931-45).

The museum holds 5,974 wartime heritage items, more than 40,000 books and documents, attracting both domestic and foreign tourists. Many visitors don't know that the museum is not an official construction, but a personal effort.

Wu Xianbin, a 56-year-old Nanjing-based businessman, is the curator of the private museum. As a resident of Nanjing, he always had special feelings about the war against Japanese aggression.

In December 1937, after capturing Nanjing, Japanese troops massacred over 300,000 Chinese citizens in the city, the then capital of China.

In 2002, Wu bought an English book on the Nanjing Massacre by chance. He was impressed by the book and realized how little he knew about the history of that war.

In 2006, Wu decided to build a private museum on the war on his own.

"Through the museum, I could search for more historical pieces, and more people would know details about the war," Wu says.

Building and managing a museum on your own is no easy task.

It was not easy to find a suitable address for such a museum in the city. The building where the museum now stands was once Wu's factory. He closed the factory and gradually rebuilt it into its present form.

In the beginning, Wu didn't know where to find historical items, so he spent a lot of time wandering around Nanjing's ancient streets, antique stalls and bookstores. However, coming back empty-handed was common.

Fortunately, with an expanded scope of search, he still found some "treasures".

On the second floor of the museum, an ordinary-looking rusty washbasin will catch your eye. It was used by Chinese soldiers in the battle of defending Nanjing in late 1937.

The basin was dug up from the Qinhuai River. It went to a peddler. As soon as Wu heard of it, he hurried to find the peddler and bought it back, which cost him several thousand yuan.

Once, in order to buy a set of precious materials from a collector, Wu took a train for more than 20 hours, earnestly persuaded the collector, and finally purchased the whole set of materials for 50,000 yuan (US$7,144).

Thanks to Wu's efforts, the museum continued to expand. The number of employees at the museum has increased from one to eight, and collecting channels have developed from solely offline trading into online purchasing and auctions.

In the meantime, Wu's requirements for these historical items and documents have gradually increased.

"In the past, I worried about the lack of collections in the museum, but now solid, first-hand items have become my first choice," says Wu.

The exhibition hall now displays over 2,000 pieces of historical items while over 3,000 pieces are piled up in the warehouse. Lying in the museum, collections silently tell their own stories.

Wu recalls that when the museum opened in 2006, he spent most of the time alone in the museum without seeing any visitors for more than three months.

Now the museum is receiving more and more visitors from home and abroad. So far, it has received more than 300,000 visitors, including several hundreds of overseas groups.

Zhao Jianqiang, a Nanjing resident who visited the museum on July 5, says that while the scale of collections here is not as large as that of public museums, small items such as letters and washbasins can show little-known aspects of the history.

"The handprint wall of veterans on the third floor particularly shocked me. Peace has never come easily," Zhao says.

Though Wu has been collecting and displaying historical items of the war all these years, he was not a war enthusiast. On the contrary, working as a curator in a war museum has made him more appreciative of the preciousness of peace.

Since 2014, Wu has frequently traveled to Japan to participate in historical meetings held by Japanese nongovernmental organizations, where he carried valuable collections to communicate with local people, and advocated the value of peace.

Wu's museum attracts around 700 Japanese visitors per year, and some of them have become his friends.

A Japanese painter painted a portrait of Wu after visiting the museum. An elderly Japanese couple made more than 3,000 paper cranes as a symbol of peace, and donated them to the museum, Wu says.

Now, with more people paying attention to the history of the War of Resistance Against Japanese Aggression, the museum is getting more support.

When it comes to the future of the museum, Wu is not concerned, "I am not alone anymore. I believe I can find more like-minded people to continue this mission, so that the voice of peace can be spread more widely."