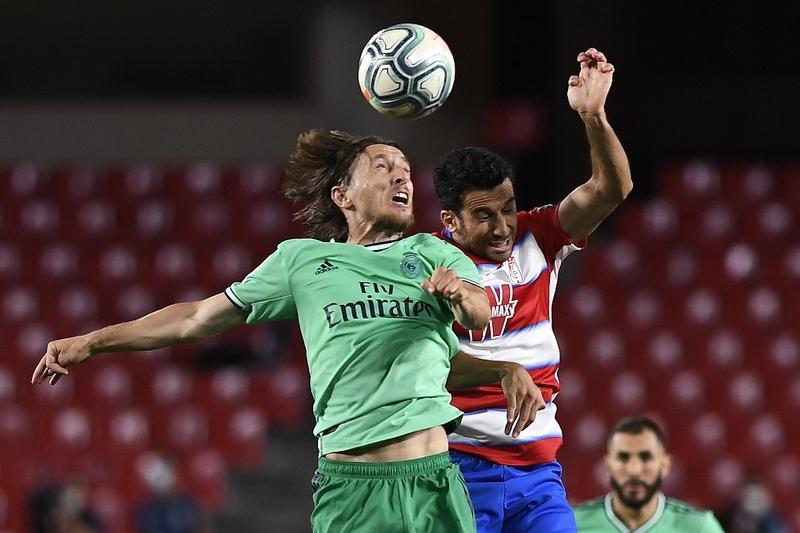 GRANADA, Spain - Real Madrid endured their toughest test at Granada on Monday since La Liga restarted but showed real determination to grind out a 2-1 win and record their ninth consecutive victory as they moved within touching distance of reclaiming the title.

Early goals from Ferland Mendy and Karim Benzema were enough to restore a four-point lead over Barcelona and Real will clinch their first league title since 2017 with a win over Villarreal on Thursday or at Leganes on the final day of the season.

“It’s true that we’re one step closer but we have to keep going, there are still more points to play for and we’re going to try and win every game left as that was always our objective,” said captain Sergio Ramos.

“I really hope we can celebrate winning this league title, our results speak for themselves.”

Zinedine Zidane’s Real side got off to a flying start when French defender Mendy skipped into the box practically unopposed and rifled the ball into the net from the tightest of angles in the 10th minute, scoring his first goal for the club.

Real’s top scorer Benzema doubled the advantage with a cool finish six minutes later to net his 19th goal of the season but 10th placed Granada, who still had slim hopes of European qualification, refused to lie down.

Real’s in-form goalkeeper Thibaut Courtois made the first of two fine saves by tipping away a shot from defender Domingos Duarte before the break and Venezuelan forward Darwin Machis pulled one back early in the second half.

It was the first goal Real had conceded in six matches but Granada threatened to equalise as Machis missed the target on the volley while Courtois showed superb reflexes to deny forward Antonin late on.

Ramos was then the hero as he cleared a Ramon Azeez shot off the line seconds later and the leaders had to withstand a goalmouth scramble in added time.

Zidane celebrated wildly when the full-time whistle came and praised his side for coping with Granada’s late onslaught.

“I let out a shout because I was happy and because in football you have to suffer,” said the Frenchman, who is closing in on his second La Liga title in under four years as Real coach along with three Champions League crowns.

“I shouted out loud because the three points were very important and I wanted to tell my players that they had played a superb game. To win this league you have to suffer a little bit and we dug in as a team. You have to be proud of this team.”