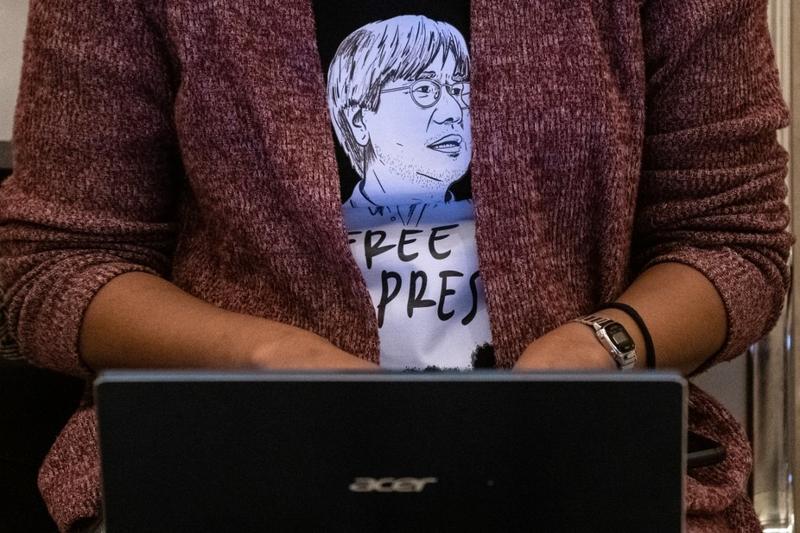 A journalist wears a T-shirt with an image of Malaysian news site Malaysiakini's editor-in-chief Steven Gan at the Federal Court in Putrajaya on July 13, 2020, as the site faces contempt of court proceedings. (MOHD RASFAN / AFP)

KUALA LUMPUR - A Malaysian court heard on Monday a contempt case brought by the government against independent news portal Malaysiakini and its editor-in-chief over readers’ comments posted on its website, in a case widely seen as a test for press freedoms.

At Monday’s hearing, Malaysiakini’s lawyer Malik Imtiaz Sarwar argued that there was no evidence the portal intended to post the comments

Rights groups have accused Prime Minister Muhyiddin Yassin’s government of stifling dissent after a series of clampdowns against critics of his four-month-old administration.

Last month, Malaysia’s attorney-general filed an application to cite Malaysiakini and its editor-in-chief Steven Gan for contempt over five comments posted by readers on its website that allegedly undermined public confidence in the judiciary.

Malaysiakini and Gan, who could face a jail term as well as a fine, have maintained they could not be held responsible and the offending comments had been immediately removed after they were contacted by police.

At Monday’s hearing, Malaysiakini’s lawyer Malik Imtiaz Sarwar argued that there was no evidence the portal intended to post the comments.

“One shouldn’t be shooting the messenger unless one can actually show the messenger is the creator of the message being delivered,” he told the court.

Government lawyer S. Narkunavathy said Malaysiakini should be held liable for facilitating the publishing, arguing the portal’s filtering systems had been insufficient to prevent the comments from being posted.

“We say that they exercise control over the platform and, as such, they have to assume responsibility to expeditiously remove any comment that is adverse,” she told the court.

The case comes as six employees of Qatar-based broadcaster Al Jazeera have been questioned by police over a documentary on Malaysia’s detention of undocumented migrants that authorities have accused of being inaccurate, misleading and unfair.

Al Jazeera said it stood by the professionalism and impartiality of its journalism.

Other Malaysians have also recently been taken to court for online postings, including for criticising the country’s coronavirus lockdown measures.

Authorities have defended the migrant arrests as necessary for public health and order, amid rising anger towards foreigners and refugees who were accused of spreading the coronavirus and taking up scarce state funds.