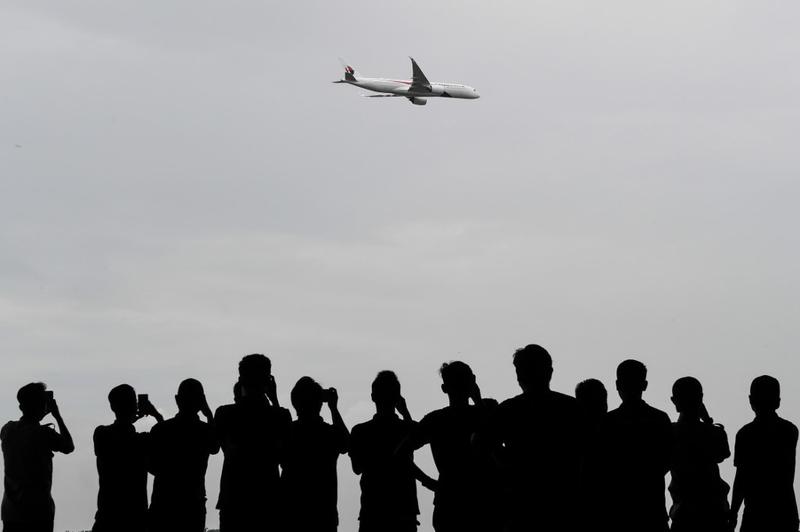 A Malaysia Airlines Airbus A350 aircraft makes a flypast as employees of the airline take photographs from a hangar at an engineering complex adjacent to the Kuala Lumpur International Airport in Sepang, outside Kuala Lumpur on November 30, 2017. (MOHD RASFAN / AFP)

KUALA LUMPUR - Malaysia’s aviation regulator has temporarily suspended pilots employed by domestic airlines who hold Pakistani licenses, after the government of the South Asian nation revealed that many pilots had dubious qualifications.

Pakistan last week grounded almost a third of its pilots after discovering they may have falsified their qualifications. Pakistan has a total of 860 pilots, 107 of whom work for foreign airlines

The Civil Aviation Authority of Malaysia (CAAM) said in a statement on Thursday that the decision came after an evaluation of all foreign pilots in Malaysia. The regulator told Reuters that there are less than 20 Pakistani pilots in the country.

CAAM said the pilots were employed with “local operators”, such as flying schools, flying clubs and training organisations.

Pakistan last week grounded almost a third of its pilots after discovering they may have falsified their qualifications. Pakistan has a total of 860 pilots, 107 of whom work for foreign airlines.

Global concern has mounted since the announcement, with countries grounding Pakistan pilots and seeking to verify their credentials.

CAAM said it is making efforts with its Pakistani counterpart to verify the authenticity of the license holders.

“License holders that are verified as valid by (the Pakistan Civil Aviation Authority) will be reinstated immediately,” it said.