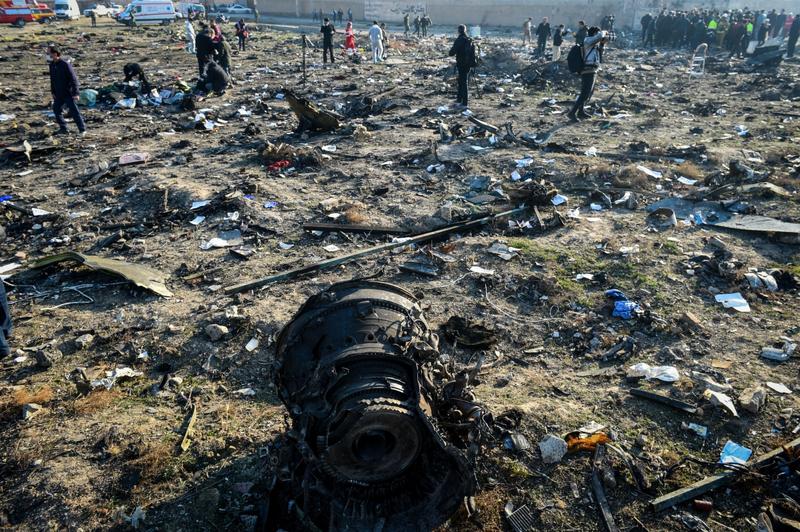 Aircraft parts from the wreckage of the Ukraine International Airlines which crashed shortly after takeoff lie on the ground near Shahedshahr, Iran, Jan 8, 2020. (ALI MOHAMMADI / BLOOMBERG)

An Iranian air defense unit that “forgot” to adjust its radar system triggered a chain of communication and human errors that led to the deadly downing of a Ukrainian passenger jet in January, according to a report from Iran’s Civil Aviation Organization (CAO).

Iran said it mistakenly shot down Ukraine International Airlines Flight 752 shortly after take-off, killing all 176 aboard. Decoding of the jet’s black boxes is expected to start July 20.

The plane was downed by two missiles, fired 30 seconds apart, from an air defense unit that mistook the jet for a cruise missile.

An operator had forgotten to re-adjust the north direction on the radar system after moving to a new position, an error that contributed to misreading the radar’s data, according to the report published on CAO’s website on Saturday.

“The operator of the air defense system launched a missile at what it had detected as a hostile target without response from the command center,” CAO said in the report. An unnamed person took action independently and without authorization from superiors, it added.

The incident took place hours after Iran’s defense systems were put on high alert following the country’s missile attack on a US air base in Iraq in retaliation for the killing of a top Iranian general by the order of President Donald Trump.

Six people have been arrested in connection with the incident, authorities said in June without giving details.