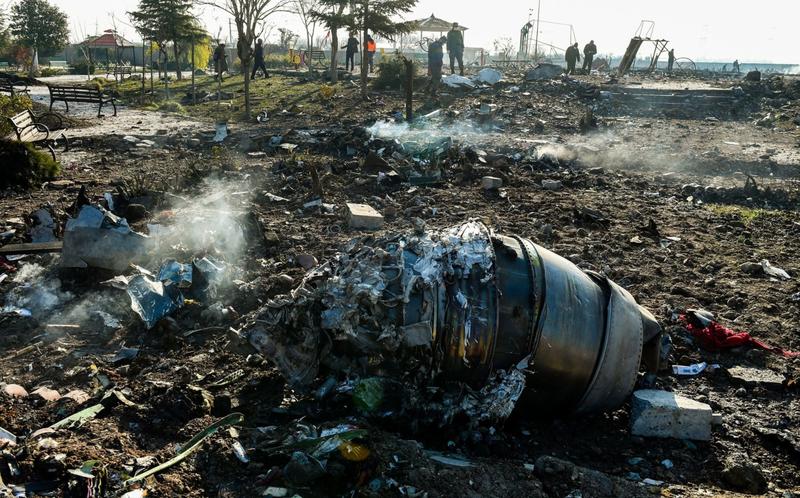 Aircraft parts from the wreckage of a Boeing Co 737-800 aircraft, operated by Ukraine International Airlines, which crashed shortly after takeoff lie on the ground near Shahedshahr, Iran, Jan 8, 2020. (PHOTO / BLOOMBERG)

DUBAI — A Ukrainian passenger plane that crashed after taking off from the Iranian capital on Jan 8 was downed by two short-range surface-to-air missiles, Iran’s Civil Aviation Organization said in a second preliminary investigation report.

The Tor-M1 missiles were launched at the Kyiv-bound Boeing 737-800 jetliner from the north, according to the report

The Tor-M1 missiles were launched at the Kyiv-bound Boeing 737-800 jetliner from the north, according to the report.

Iran has requested equipment it says it needs from US and French authorities to download information from the plane's black boxes but Tehran had not yet received a positive response, the Iranian civil aviation body said.

Canada, Ukraine and other nations who had citizens on the flight in which all 176 people aboard were killed when it was accidentally shot down on Jan 8, have asked Iran to send the flight data and voice recorders to experts abroad for analysis.

Tehran has given mixed signals about whether they would be handed over. Canada, which had 57 citizens on the flight, has said France would be the best place to send the black boxes because it was one of the few nations with the ability to read them.

Iran’s reluctance to hand over the black boxes may frustrate nations with citizens on the flight, many of whom were Iranians with dual nationality. Tehran already faces demands for compensation and a full investigation into the shooting down.

Iran’s Civil Aviation Organization said in its second report on the disaster that it did not have the equipment needed to download data from the model of recorders installed on the US-built Boeing 737.

The aviation body said Iran had asked for equipment from the US National Transportation Safety Board and France’s accident agency BEA but said Tehran had not received a positive response.

- Plane took off from Tehran at 6:12 am local time and lost all contact with air traffic control at 8,100 feet

- Aircraft moved past a residential area and its first physical contact with the ground was at a public park. Plane was torn apart as it moved through a football pitch, nearby farmland and gardens