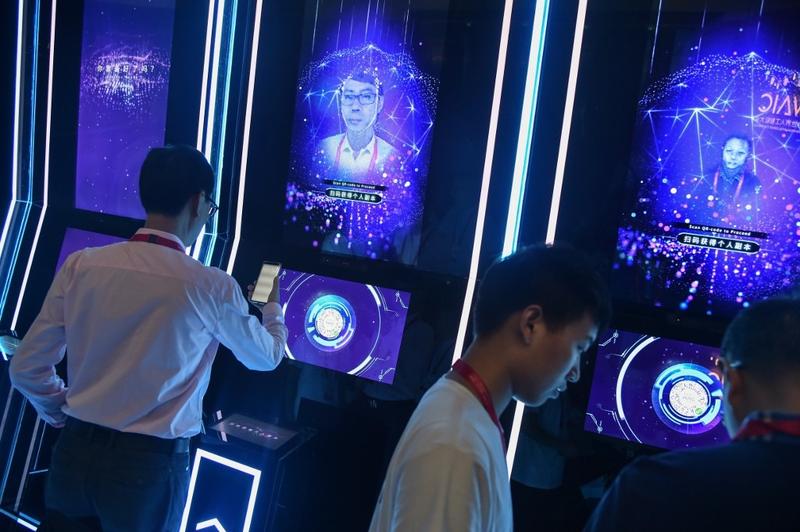 In this Aug 29, 2019 photo, people have their faces scanned as they arrive for the opening ceremony of the World Artificial Intelligence Conference (WAIC) in Shanghai. (HECTOR RETAMAL / AFP)

Shanghai unveiled on Friday an artificial intelligence-themed investment consortium on the sidelines of the World AI Conference 2020, giving its AI ambitions a further leg up.

Under the auspices of the Shanghai AI Industrial Investment Fund, the initiative is set to organize an expert committee to provide insights, an entrepreneur bloc of CEOs and chief technology representatives, a training program for startups, as well as an investment club connecting fledging AI companies with capital.

Chen Mingbo, deputy secretary-general of the Shanghai municipal government, said in its bid to become an AI hub, the city has accumulated advantages in technology, industries, applications and a talent ecosystem.

"For the next stage, Shanghai will continue to pull strengths to develop six key industrial clusters, including autonomous driving, robots and smart chips, optimize industrial outlay throughout the city, and foster 20 leading enterprises to help the city join the global AI league by 2025," he said.

Xu Li, co-founder and CEO of AI company SenseTime, emphasized that with the advancement of AI, the technology should not only address major problems but also a list of long-tail issues. That is why an open system of algorithms is vital.

During one sub-forum on Friday, Xu announced the upgrade of the company's indigenous OpenMMLab, an open source AI algorithm system, to cover over 100 algorithms and 600 pre-trained models so that more industries can jump on the AI bandwagon.

Shanghai's AI ambition does not stop at the technology level. On Friday, the city also released Action Proposals on Collaborative Implementation of the Consensus Principles of AI Governance, aiming to provide guidelines on using AI in a responsible manner.

"When AI technologies are being applied in every aspect of our lives, we should probably be aware of the subsequent social, legal and governance implications apart from its commercial value," said Yin Qi, co-founder and CEO of Megvii.

To this end, the company has established an ethics committee addressing AI-derived issues, and anchored its business focus on application-based reliable technology, as well as the security and protection of data privacy.

"AI is sustainable only by being responsible," he said.

Omar Sultan Al Olama, minister of state for artificial intelligence of the United Arab Emirates, agreed. In a video speech delivered to the event, he said responsible development and deployment of AI are going to be the key "if we want to assure the future that what we create is better than the current version that we are in".

"Can we get enough data, and unbiased data, to deliver the services in a way that ensures the person getting them is not affected by this data? I do believe that these challenges will be overcome if we come together, if we work hand in hand, and if we do create a future that is better for everyone everywhere."