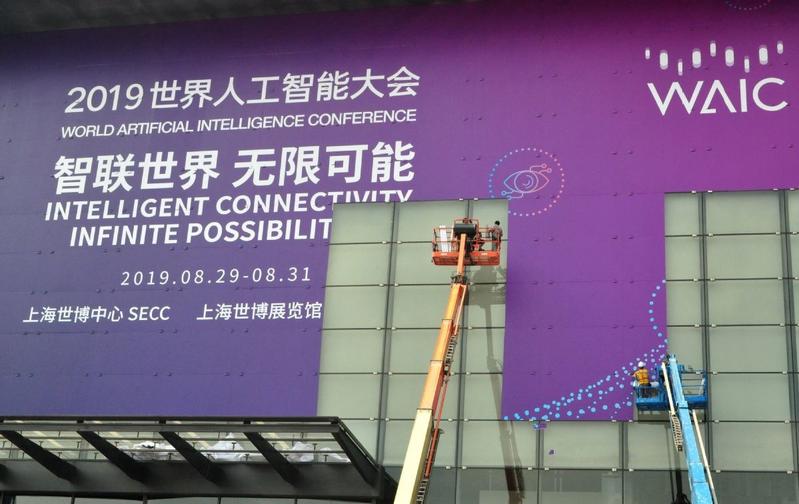 In this undated photo, preparatory work is underway for the 2019 World Artificial Intelligence Conference, which will be held in Shanghai from Aug 28 to Aug 31, 2019. (YAN DAMING / FOR CHINA DAILY)

Shanghai has set itself on a long-term trajectory to become the nation's, and even the world's leader in artificial intelligence. Its comprehensive industrial chain, growing startup culture, and strong human capital are all working to catapult the city to the AI forefront. But to attain a decisive AI lead in an industry that requires constant input of time and money, consistent policy guidance and support are critical.

To decipher Shanghai's AI dream, China Daily has compiled a list of mechanisms, including national and city-level policies, industrial clusters and an army of AI-themed activities and pilot projects－all of which are under the auspices of the government－that will enable Shanghai to lead the AI pack.

Shanghai's AI ambition was first outlined in a municipal plan issued in November 2017, when the city authorities pledged to expand the scale of the industry to more than 100 billion yuan (US$14.2 billion) by 2020. Along with this goal in industrial output, the city is looking to set up a dedicated industrial fund, introduce 60 emerging AI technologies from local companies, and host six demonstration zones and 60 AI applications in the same period of time.

Shanghai's AI ambition was taken up a notch thanks to the decision by the central government to build the nation's first pilot zone for the innovation and application of AI.Dubbed "Shanghai National Pilot Area for the Innovative Development of New-Generation AI", the dedicated area, approved by the Ministry of Industry and Information Technology in May, has three main goals: to establish an AI core industrial cluster; to promote AI applications; and to build a supporting system for AI innovation.

The lifeline to AI's materialization is the number and variety of real-life scenarios to put the technology into daily practice. The city has rolled out a plan to both solicit applicable AI solutions and promote a suite of indigenous AI technologies to speed up the widespread application of AI.Since the end of last year, two scenarios have been published by the metropolis thus far, calling for tangible AI solutions for education, healthcare, transportation, manufacturing and city management, among others. Meanwhile, initiatives such as AI-powered diagnosis, cargo transportation and civic services are being promoted through roadshows and AI-themed forums.

All industries require economies of scale and AI is no exception. To facilitate Shanghai's pioneering of the latest AI technologies, the city has set up a special AI industrial alliance dedicated to resource matchmaking.

The 22-member bloc consists of leading AI enterprises ranging from domestic internet giants such as Alibaba, Tencent and Baidu to international powerhouses such as the Microsoft Asia Research Center (Shanghai) and ABB, a Swiss conglomerate that also specializes in robotics and automation technology. The alliance aims to provide resources matchmaking for participating enterprises, providing them with rich application scenarios where an AI-makeover is deemed essential.

The first physical incubator was unveiled in May as Shanghai strives to make AI a cornerstone of its industrial transformation. Launched in Shanghai's Wujiaochang, an area home to multiple leading research houses such as Fudan University and Tongji University, the first 3,000 square-meter AI Space serves as an accelerator to turn abstract AI ideas into prototypes and potentially into tangible products.

The facility will provide working space, databases, technical support, financing and resources matchmaking with application scenarios. Such a model will be duplicated across the city in due time. Five AI startups have signed memorandums of understanding with the first AI Space, covering areas such as the combination of AI and medical care, education and big data.

The World Artificial Intelligence Conference, which debuted in September, brings together the world's top AI luminaries, entrepreneurs and academicians to share their insights on the latest development of this technology. While the inaugural meeting attracted a host of high-profile personalities including Turing Award winner Raj Reddy, this year's event, which is scheduled to run from Aug 29 to 31, will expand both in scale and depth. Tesla Inc CEO Elon Musk's participation is already a strong indication that the WAIC is gaining traction globally. To pave the way for the conference and attract AI startups, notably those from abroad, an AI competition called AIWIN will be held ahead of the WAIC. Awards in four subcategories will be given to winning teams. Local authorities have ratcheted it up a notch this year by recruiting overseas teams through roadshows in Israel, France, and the United Kingdom.

READ MORE: In the future, how an AI utopia would work

Among the six AI demonstration zones that the city plans to construct, AIsland serves as an ideal prototype mimicking what future metropolitan life could look like. The 66,000 square-meter special zone in Zhangjiang Science City, Shanghai's science and technology hub, will conduct a number of pilot programs such as smart parking, intelligent lighting, environment monitoring and unmanned convenience stores. The first batch of entrants includes international and domestic technology luminaries IBM, Microsoft, Alibaba, Tencent, SenseTime, and a research facility affiliated to Tongji University. The zone will feature the city's first 5G+AI pilot zone and host over 8,000 research and development personnel.