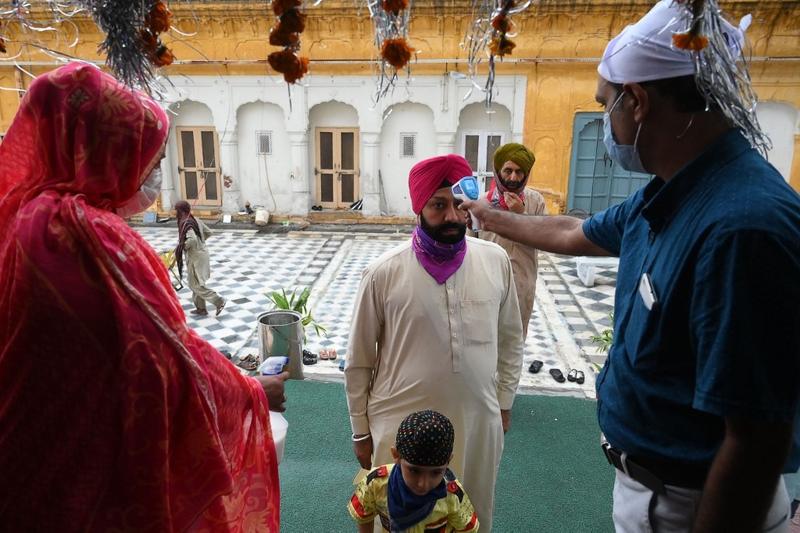 In this June 29, 2020 file photo, an official checks the body temperature of a Sikh pilgrim at the mausoleum of Maharaja Ranjit Singh, the founder of the Sikh empire, during commemorations for his 181th death anniversary in the eastern city of Lahore. (ARIF ALI / AFP)

ISLAMABAD - A civil court in Pakistan's eastern city of Lahore had issued notices to the US Embassy to Pakistan and others on a US$20 billion damages suit filed by a citizen over the spread of COVID-19, local media and a lawyer said Thursday.

A senior advocate from Lahore Waseem Yusuf Khan, who witnessed the court proceedings, told Xinhua that the plaintiff named Raza Ali, who recovered from COVID-19 recently, alleged in his suit on Wednesday that the United States is the sole responsible for unchecked spread of the pandemic which caused losses to him, his family and the country.

The plaintiff has also made US Consul General in Lahore, the US secretary of defense through the consul general defendants in his petition, saying that his family members are suffering and their health was compromised and that they might not be able to live a healthy life again.

He alleged that the virus was spread in the world because the defendants failed to fulfill their duties to the international community and put billions of human lives in danger.

"The defendants are responsible for the colossal death toll, misery, and economic disasters they inflicted on the world, including but not limited to entire Pakistan," said the petition, adding that the US administration has been generating hurdles before international unity and global strategy to fight COVID-19.

He requested the court to pass a ruling that the pandemic was caused by the United States and it affected Pakistani people badly and order the defendants to pay US$20 billion as damages.

The civil judge of the court issued notices to the respondents and asked them to appear before the court on Aug 7, 2020.

According to local media reports, the court has also sought a legal opinion to stop the US Consul General from leaving Pakistan until the decision of the petition.