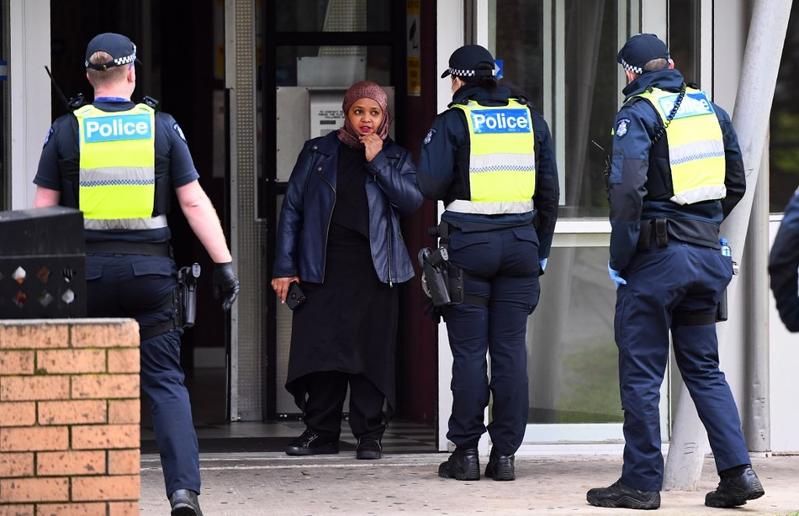 Police speak to a woman at one of nine public housing estates locked down due a spike in COVID-19 coronavirus numbers in Melbourne on July 6, 2020. (WILLIAM WEST / AFP)

WILLINGTON / SYDENY / DUBAI / CAIRO / SEOUL / SINGAPORE / SYDNEY / MELBOURNE- Hundreds of police officers and army troops are being deployed to enforce the closure of the busy border between Australia's two most populous states as officials grapple to contain a fresh coronavirus outbreak.

The state line between New South Wales (NSW) and Victoria, which is highly porous and stretches hundreds of kilometres, is scheduled to close at 11.59 pm on Tuesday for the first time in 100 years.

People caught crossing the border without permission via any of the 55 roads that are heavily used by commuters, school children and road freight, or several river and wilderness crossings, will face penalties including a fine of A$11,000 (US$7,700) and six months imprisonment.

Lockdown measures were reimposed in Australia’s second biggest city on Tuesday, confining Melbourne residents to their homes unless undertaking essential business for six weeks, as officials scramble to to contain a coronavirus outbreak.

The decision, which affects around 4.9 million people, was announced just hours before the busy border between Victoria, of which Melbourne is the capital, and New South Wales is scheduled to close for the first time in a century.

From midnight on Wednesday, everyone in Melbourne will be required to stay home unless travelling to work, studying, shopping for food or attending medical appointments. Restaurants, cafes and bars will be able to provide takeaway service only, gyms and hair salons closed, household gatherings limited to two people and the current school vacation extended.

Singapore says it doesn’t see a second wave of coronavirus infections at this point, even as the number of community and imported cases ticked up after the city-state lifted restrictions put in place to curb the spread of the pandemic.

The new cases are a continuation of cryptic infections occurring within the community, Kenneth Mak, the health ministry’s director of medical services, said at a briefing Tuesday.

In the past week, Singapore saw the average of new community cases a day rise to 12 from around 8 in the prior week. Also over the past week, 20 imported cases were detected, after a long period where there were none. This comes as some countries globally are seeing a resurgence in virus cases after lockdowns eased.

With Singapore’s election set to be held July 10 amid the pandemic that has infected about 45,000 people in the city-state, the government’s response to tackling the virus is set to be one of the defining issues in the polls. While it was praised for its earlier containment of the outbreak, the spread among migrant workers -- making up more than nine in 10 cases -- has challenged the country’s efforts.

Minister of National Development Lawrence Wong, who co-chairs the virus task force, said at the briefing that Singapore has brought infection rates down and has among the lowest death rates in the world.

Within the community, households were the most common mode of transmission, with an increase seen in workplace cases. Among the community unlinked cases -- of which 50 percent were from the construction sector -- half were past infections and the majority were asymptomatic. Still, total overall daily new cases have been on the decline, and migrant worker dormitory cases have also fallen.

"The number of confirmed infections in the country totaled 168,645 while fatalities stood at 2,151," the official said.

Fiji's Acting Permanent Secretary for the Health Ministry James Fong said on Tuesday that one patient is a 37-year-old man, whose father, a 66-year-old man had been tested positive on Monday. They have been moved to a hospital in Lautoka, the second largest city of Fiji for treatment.

The other confirmed case is a 36-year-old woman who was confirmed on Tuesday morning. All of them returned to Fiji from India on a repatriation flight on Saturday.

Iran suffered its deadliest day of the coronavirus outbreak, as the country’s health minister said warnings about the spread of the disease had fallen on “deaf ears.”

“I repeatedly said to our people that it’s extremely dangerous to understate the situation,” Health Minister Saeed Namaki said on state TV just before the latest figures were made public. “Unfortunately, our pleas fell on deaf ears until we were gripped by a new wave” of infections.

The virus began surging again in May, around a month after Iran first started to loosen lockdown measures on its population of 82 million in an effort to keep its sanctions-hit economy afloat. Curbs have been reintroduced in some of Iran’s busiest port cities on the Persian Gulf, and wearing face masks in enclosed public spaces became mandatory nationwide from July 5.

The official also announced 68 additional deaths due to the virus, bringing the total number of fatalities to 3,309, while 30,785 people have recovered.

The country also reported 94 deaths and 1,724 more recovered cases from the coronavirus during the day, bringing the death toll to 2,567 and the total recoveries to 34,741.

The Tokyo metropolitan government on Tuesday confirmed 106 new daily COVID-19 infections in Tokyo, with the number of new cases topping 100 for the sixth straight day in the Japanese capital.

The city has been grappling with a resurgence of cases recently and since the government lifted a nationwide state of emergency declared over the virus' spread in late May.

Many of those testing positive for the pneumonia-causing virus of late have been younger people in their twenties and thirties, Tokyo metropolitan government officials have said, with disproportionately high numbers of cases being found to be connected to Tokyo's downtown nighttime entertainment districts.

Kyrgyzstan's total number of COVID-19 cases passed 8,000 on Tuesday. Head of the country's Health Ministry Ainura Akmatova said that 450 people tested positive for COVID-19 in the last 24 hours, bringing the total number of infections to 8,141.

Akmatova said that seven patients died from the disease in various facilities, bringing the total number of fatalities in the country to 99. 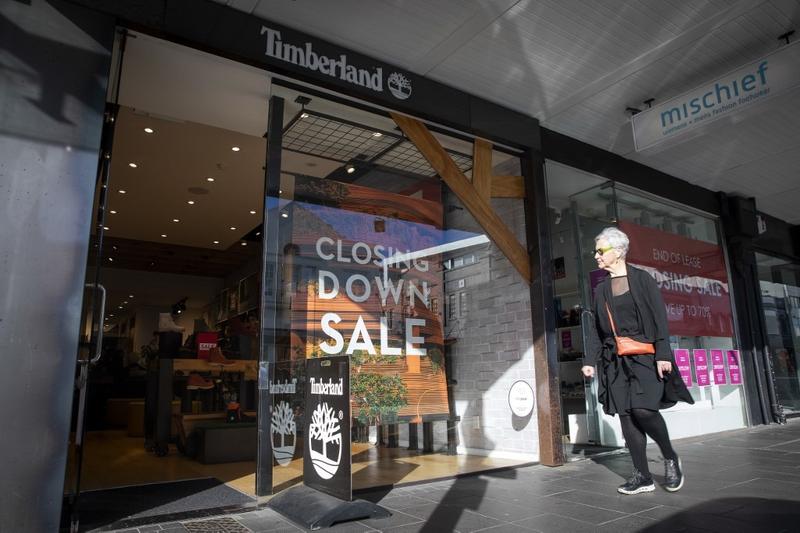 A shopper makes her way into a store offering a closing down sale in Auckland on June 19, 2020. (GREG BOWKER / AFP)

Lebanese Health Minister Hamad Hassan said on Monday that the number of the Lebanese who have been infected with COVID-19 accounts for only 0.3 percent of the Lebanese population, which encouraged the government to reopen economic sectors.

The number of COVID-19 cases in the Philippines surged to 47,873 after the Department of Health (DOH) reported 1,540 new cases on Tuesday.

The new patients are Mongolian nationals who have recently returned home from Russia via Altanbulag border point, said Dulmaa Nyamkhuu, head of the NCCD, at a daily press conference.

New Zealand said on Tuesday its national airline will not take new bookings for three weeks as the country looks to limit the number of citizens returning home to reduce the burden on overflowing quarantine facilities.

As the COVID-19 pandemic worsens globally, thousands of New Zealanders are returning to South Pacific nation, which is among a handful of countries to have contained the coronavirus, re-opened its economy and restored pre-pandemic normalcy.

Bookings on Air New Zealand flights will be managed to ensure the government can safely place citizens into managed isolation facilities, Housing Minister Megan Woods said in a statement.

"We are seeing rapid growth in the numbers of New Zealanders coming home as the COVID-19 pandemic worsens," Woods said. "The last thing we need are hastily set up facilities to meet demand."

New Zealand reported two new cases of COVID-19 on Tuesday, with the number of active cases in the country remaining at 22, all in managed isolation or quarantine facilities, according to the Ministry of Health.

Oman's Ministry of Health announced 1,557 new cases of infections, bringing the total number of COVID-19 cases in the country to 47,735, including 218 deaths and 29,146 recoveries. 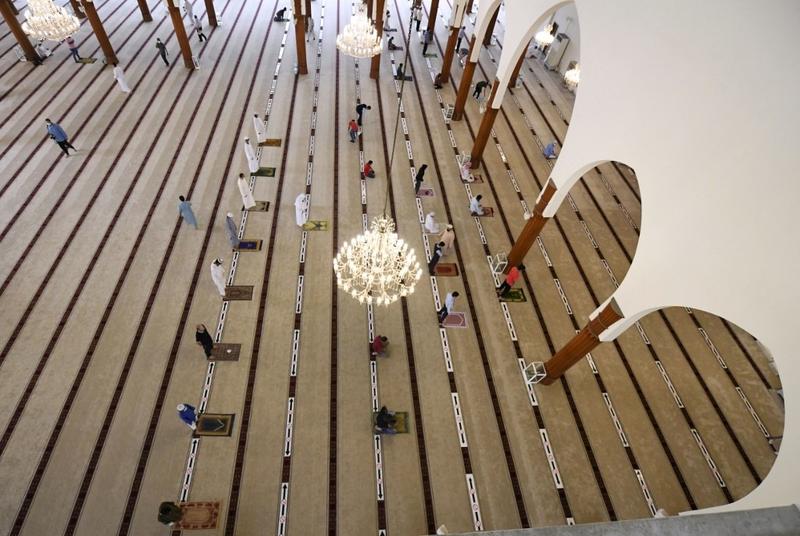 Worshippers keeping a safe distance from one another perform prayers at a mosque in the emirate of Sharjah after the United Arab Emirates reopened places of worship following months of closure to avoid the spread of the Covid-19 coronavirus, on July 1, 2020. (KARIM SAHIB / AFP)

Palestine on Tuesday said that COVID-19 has claimed the life of an elderly Palestinian man in the West Bank, raising the death toll to 22 in Palestine.

After a record 112 days on a specialised life-support system, a South Korean COVID-19 patient is recovering from double lung transplant surgery, doctors say, in only the ninth such procedure worldwide since the coronavirus outbreak began.

The 50-year-old woman was diagnosed with the disease and hospitalised in late February and then spent 16 weeks on extracorporeal membrane oxygenation (ECMO) support, which involves circulating a patient's blood through a machine that adds oxygen to red blood cells.

South Korea reported 44 more cases of the COVID-19 as of midnight Tuesday compared to 24 hours ago, raising the total number of infections to 13,181.

The daily caseload hovered below 50 for the second consecutive day after having stayed above 60 for three days amid the continued small cluster infections and imported cases.

Schools across Sri Lanka were partially re-opened on Monday after being shut for nearly three months, as the spread of COVID-19 has been put under control in the island country, local media reported Tuesday.

According to the Education Ministry, schools were re-opened for grades 13, 11 and 5, leading to nearly 800,000 students returning back to school across the country.

The tally of COVID-19 cases in Turkey climbed to 206,844 after 1,086 new infections were reported, Turkish Health Minister Fahrettin Koca tweeted, while cautiously announcing that the number of daily patients is declining.

The death toll from the coronavirus in the country rose to 5,241 after 16 new fatalities were added in the past 24 hours, he said, adding 2,315 more patients recovered, raising the total recoveries to 182,995.

Turkey's amusement and theme parks reopened on Monday as the government further eased the COVID-19 restrictions.

The United Arab Emirates plans to test two million people, or about 20% of the population, for the novel coronavirus over the next two months after the infection rate climbed again following the lifting of restrictions, a government spokesperson said.

Abu Dhabi's Etihad Airways said on Tuesday it was resuming flights to more destinations after the United Arab Emirates this month eased travel restrictions on residents and citizens.

State-owned Etihad said by August it planned to increase its network to up to 58 destinations, including Washington DC, Mumbai and Dusseldorf.

The United Arab Emirates (UAE) announced 528 new COVID-19 cases and one more death, increasing the tally of infections to 52,068 and the death toll to 324.

The total number of coronavirus cases in Yemen's government-controlled provinces increased to 1,284 after 19 new cases were added.

The number of recoveries in the government-controlled areas, including the southern port city of Aden, increased to 575 and the death toll climbed to 345.