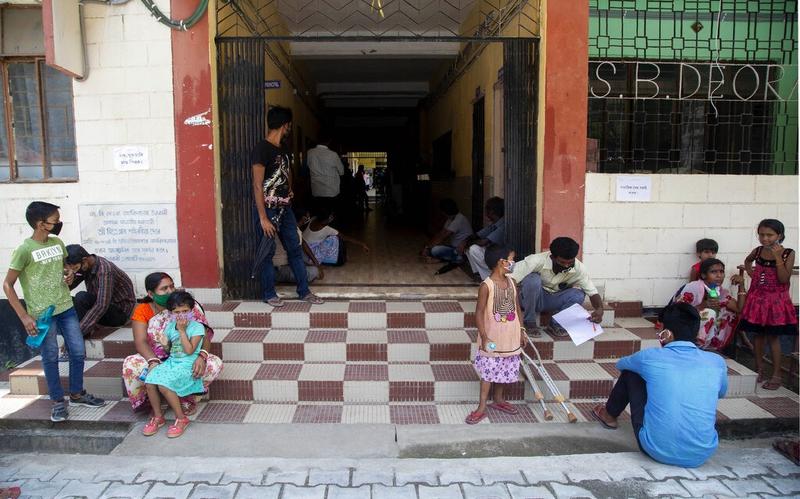 The under-development vaccine is “envisaged” to be rolled out “for public health use by Aug 15 after completion of all clinical trials,” Indian Council of Medical Research, or ICMR, said in a July 2 letter to clinical trial sites, which was seen by Bloomberg News. It “is one of the top priority projects which is being monitored at the topmost level of the government.”

Bharat Biotech International Ltd., the vaccine maker, received regulatory approval to start human clinical trials for its experimental shot earlier this week and the Indian Council of Medical Research aims to roll out the vaccine “for public health use by Aug 15 after completion of all clinical trials”

The bid underscores India’s urgent need for a way to halt the coronavirus, but the speediness in rolling out the vaccine has alarmed some in the medical fraternity. “Such an accelerated development pathway has not been done EVER for any kind of vaccine, even the ones being tried out in other countries,” Anant Bhan, a medical researcher at India’s Manipal University, said in a Twitter post. “Even with accelerated timelines, this seems rushed and hence, with potential risks.”

The letter to investigators of clinical trial sites was meant to cut unnecessary red tape, without bypassing any necessary process, and to speed up recruitment of participants, the ICMR said in a statement on Saturday.

India's federal health ministry on Sunday morning recorded 613 more deaths and another 24,850 new cases during the past 24 hours, taking the death toll to 19,268 and number of confirmed cases to 673,165. The increase in new cases was the highest single-day spike.

The Taj Mahal will reopen on Monday after a three-month COVID-19 shutdown. Visitors have to wear masks at all times, keep their distance and not touch its glistening marble surfaces. Only 5,000 tourists will be allowed in a day, split into two groups.

The Afghan Ministry of Public Health on Sunday confirmed 279 new COVID-19 cases, bringing the total number of infections in the country to 32,951.

Another 38 deaths were reported, taking the death toll to 864, the ministry said in a statement.

The premier of Australia's second-most populous state, Victoria, defended on Sunday his decision to put nine public housing towers in a complete lockdown as coronavirus cases continue to rise in Melbourne's suburbs.

The state recorded 74 cases new cases on Sunday, after Saturday's 108 cases prompted Premier Daniel Andrews to order about 3,000 people not to leave their homes for at least five days and to place police to guard the buildings.

In addition to the complete lockdown orders, more than 30 Melbourne suburbs are also under strict social-distancing orders, but people there can leave their houses to go to work, school or to buy groceries.

The death toll from COVID-19 in Bangladesh has surpassed 2,000, a health official announced here Sunday.

Senior Health Ministry official Nasima Sultana said in a briefing on Sunday afternoon that 2,738 new cases and 55 more deaths were reported in the past 24 hours, bringing the death toll in the country to 2,052 and the total number of cases to 162,417.

Brunei reported no new cases of COVID-19 on Saturday, with the national tally remaining at 141.

It marked the 58th consecutive day without new cases since May 7.

According to the Ministry of Health, no active cases were being treated at the National Isolation Center.

Three deaths had been reported in the country and a total of 138 patients have recovered.

Iranians who do not wear masks will be denied state services and workplaces that fail to comply with health protocols will be shut for a week, President Hassan Rouhani said on Saturday as he launched new measures to try to curb the coronavirus.

Iran has been battling the spread of the coronavirus, with the total number of cases hitting 237,878 on Saturday after the addition of 2,449 new cases, and a further 148 deaths bringing the country's toll to 11,408, Health Ministry spokeswoman Sima Sadat Lari said on state television.

Wearing masks becomes mandatory from Sunday in covered public places, Rouhani said on state television after tougher curbs were imposed in cities and towns in five provinces where the outbreak is rising after an easing of lockdowns from mid-April. A government website published photos of Rouhani, who is rarely seen wearing a mask, with a face covering.

Iran's armed forces has reduced their two-month basic combat training by a month until further notice because of the increased spread of the coronavirus.

It also said that 1,477 more patients have recovered, bringing the number of recoveries to 31,077.

Minister of Public Security Amir Ohana has entered home quarantine until July 12, after meeting twice with Shabtai in the past two weeks. Meanwhile, the Health Ministry said that Israeli President Reuven Rivlin, Defense Minister Benny Gantz and army chief of staff Aviv Kochavi will not have to undergo quarantine despite meeting with Shabtai on Thursday.

The number of daily infections in the Japanese capital will reach 111, broadcaster NHK said on Sunday. A day earlier, Tokyo Governor Yuriko Koike urged residents to avoid unnecessary and non-urgent travel outside Tokyo due to the rising number of cases.

While authorities have stressed there are no plans to call for business restrictions or implement another state of emergency, further elevated levels of infections could prompt the local or national government to implement stricter measures.

While hospitalizations in the city remain low, the total has risen during June as people returned to workplaces, restaurants and clubs. Officials have expressed concern that infections will spread beyond these zones.

Kyrgyzstan on Sunday reported 283 new COVID-19 cases, bringing its tally to 7,377, according to a statement by the country's Republican Headquarters for the Prevention of the Spread of COVID-19.

Among the new cases, 32 of them are medical workers, bringing the total number of infected medical workers to 1,097, with 500 recoveries, according to the statement.

A total of 88 patients have been discharged from hospitals in the last 24 hours, taking the tally of recoveries in Kyrgyzstan to 2,802, according to the statement.

Ten more deaths were reported in the past 24 hours, raising the country's death toll to 88.

Kuwait on Saturday reported 631 new COVID-19 cases and five more deaths, raising the tally of infections to 49,303 and the death toll to 365, the Health Ministry said in a statement.

Currently, 8,995 patients are receiving treatment, including 158 in the intensive care unit, according to the statement.

The ministry also announced the recovery of 667 more patients, raising the total recoveries in the country to 39,943.

Lebanon's tally of COVID-19 infections increased on Saturday by 25 to 1,855 while the death toll remained unchanged at 35, the National News Agency (NNA) reported.

Among the 25 new cases were 11 imported ones, according to the NNA.

Health Ministry Director-General Noor Hisham Abdullah said in a press statement that four more patients were discharged from hospitals, bringing the number of recoveries to 8,465.

Defense Minister Ismail Sabri Yaakob said Malaysia is still not opening its international borders to foreign tourists and workers as discussions with countries categorized as green zones are still underway.

One COVID-19 death was reported in the Maldives on Sunday, raising the country's death toll to 11, the Health Protection Agency (HPA) said.

The patient was a 77-year-old Maldivian woman who was admitted to the DH11 hospital and died in the early hours of Sunday, according to the HPA.

The Maldives has 2,443 confirmed COVID-19 cases, and the total number of recoveries surpassed 2,000 on Saturday, bringing the country's recovery rate up to 83 percent.

There are currently 390 active cases in the country, out of which 13 patients have been hospitalized for treatment.

Two more patients have recovered from the disease, bringing the total number of recoveries to 185, the NCCD said in statement.

Seven new COVID-19 cases were reported in Myanmar, bringing the tally in the country to 313 as of Saturday, according to latest figures released by the Health and Sports Ministry.

Myanmar has so far reported six deaths and 240 recoveries.

All three cases arrived in New Zealand's Christchurch on June 30 on a flight from Delhi, who had transited in Singapore without leaving the plane.

The ministry said all have been in managed isolation since their arrival and their cases were detected during the third day of testing.

The total number of confirmed cases the country reported to the World Health Organization (WHO) reached 1,183. One person remained in Auckland City Hospital in a stable condition on a ward.

Meanwhile, 1,804 more patients have recovered, bringing the total number of recoveries to 90,387, while the death toll increased by two to 123, according to a ministry statement quoted by QNA.

Saudi Arabia's coronavirus cases rose on Saturday to 205,929 after the addition of 4,128 new infections.

Singapore's Ministry of Health (MOH) reported 185 new COVID-19 cases on Saturday, bringing the total number of confirmed cases in the country to 44,664.

Out of the new cases, one was imported, nine were community cases and the rest were linked to the dormitories of foreign workers.

Ninety-five percent of the new cases were linked to known clusters while the rest are pending contact tracing.

The United Arab Emirates (UAE) on Saturday announced 716 new COVID-19 cases, bringing the total number of confirmed cases in the country to 50,857.

Another 704 patients have recovered, taking the tally of recoveries in the UAE to 39,857, according to the ministry.

Three more deaths were reported, pushing the country's death toll to 321, according to the ministry.

Vietnam reported no new cases of COVID-19 infection on Saturday, with its total number of confirmed cases remaining at 355, with zero deaths so far, according to the Ministry of Health.

Meanwhile, as many as 340 patients in the country have totally recovered from the disease, according to the ministry.

Vietnam has recorded no local transmission for 79 straight days while more than 10,600 people were being quarantined and monitored in the country, according to a report by Vietnam News Agency.