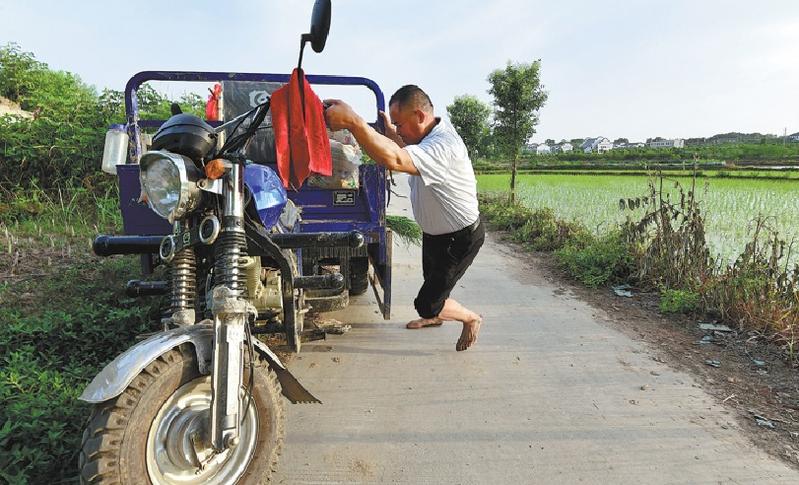 From an impoverished farmer to a well-to-do farm owner and then to a Party branch secretary, within six years, Yang rewrote his destiny through his own effort and local support systems.

After working for 20 years as a migrant worker in the capital city of Beijing, Yang had to return to his hometown in 2012 following a car accident.

Yang used his savings of more than 200,000 yuan (US$28,300), to venture into business. He started planting trees and flowers, hoping to sow the seeds for a brighter future.

Only when all villagers cast off poverty can we realize the goal of common prosperity. I am a farmer who has shaken off poverty. I want to lead the villagers to get rich together

However, after a few months, flower buds did not sprout. As a layman without any training in farming, technology or even any sales channels, Yang lost all his savings and incurred a debt of 80,000 yuan.

In 2014, his family became registered as a poor household in the village.

Just when Yang was planning to pack his luggage and return to the city again, Wang Tingwei, a village official in charge of poverty alleviation work, visited his home.

"Get up wherever you fall. We will help you to overcome difficulties," Wang encouraged the farmer to continue planting.

The official helped Yang apply for bank loans, seek professional guidance in tree and flower plantation. He also provided Yang with market and sales information. Yang developed his own flower planting methods, and after several rounds of practice, hope finally blossomed with the appearance of brightly colored blooms.

In just a year, Yang's plantation business helped him earn a revenue of 150,000 yuan, which not only paid off his debts but also helped him to get off the village's list of poor households.

In August 2015, Yang expanded his business and founded Sifangjing Family Farm. On its more than 100 hectares, the farm grows organic rice, vegetables and tea, and raises chickens and cultivates crayfish.

As the scale of Yang's farm increases, making standardized and branded products emerged as a new challenge for Yang.

In 2017, he registered the Sifangjing brand and started developing green agricultural products. The farm's products are now available on many e-commerce platforms in China.

After it set up a Party branch in 2017, Yang was elected as branch secretary of Sifangjing Family Farm.

"Only when all villagers cast off poverty can we realize the goal of common prosperity," he says. "I shoulder a heavier responsibility to help poor villagers increase their income since I became a Party branch secretary."

Yang employs impoverished locals and provides them with farming know-how and technology for free.

So far, he has helped more than 100 villagers from 50 poor-registered households to increase their income.

"Next, I plan to develop agro-ecological tourism so that visitors from cities can experience the culture of the village," says Yang. "We have many ways to make a fortune."

"I am a farmer who has shaken off poverty. I want to lead the villagers to get rich together," he said.