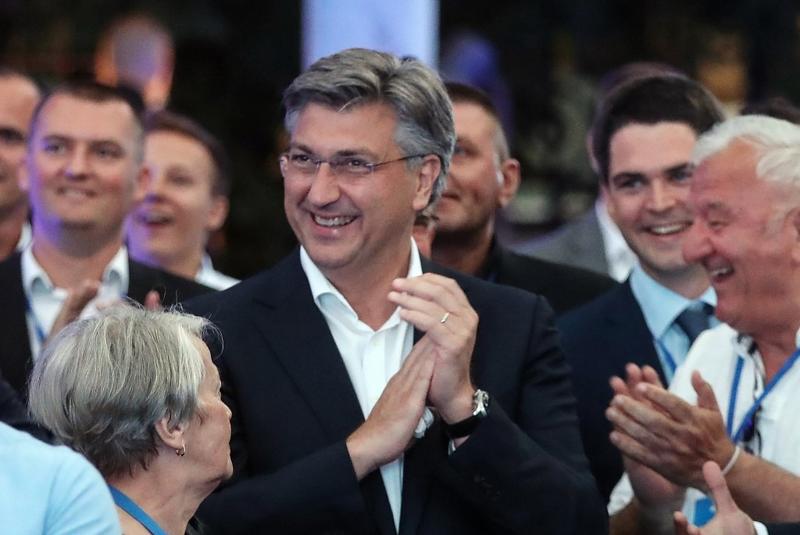 Croatian Prime Minister and leader of the Croatian Democratic Union party (HDZ) Andrej Plenkovic claps as he celebrates with party members after the first results of the parliamentary elections in the garden of the Archaeological Museum in Zagreb, on July 5, 2020. (DAMIR SENCAR / AFP)

ZAGREB - The ruling center-right Croatian Democratic Union (HDZ), led by Prime Minister Andrej Plenkovic, won the most seats in the parliamentary elections on Sunday and was expected to form a new government soon.

According to the preliminary results from the State Electoral Commission after counting over 91 percent of the votes, the HDZ won 67 parliament seats. The center-left Restart Coalition led by the Social Democratic Party (SDP) stumbled and garnered 41 seats. The third-strongest party is the recently-formed Homeland Movement, a right-wing party headed by singer Miroslav Skoro, gaining 16 seats.

"We have had a difficult mandate full of temptations, and the challenges ahead may be even greater. These challenges require responsibility, experience, and knowledge," Plenkovic said in his victory speech around midnight on Sunday.

SDP leader Davor Bernardic earlier said that he was ready to resign due to poor election results.

In 2016 elections, the ruling HDZ won 61 seats, while the SDP coalition was ranked second with 54 seats.

Over 3.8 million voters started casting their ballots at 7 am local time (0500 GMT) on Sunday, which will elect 151 members of parliament for four-year terms.

The State Electoral Commission said that so far, around 46 percent of voters have cast their ballot.

The elections this year have been seen as the most challenging one in the country's history, as the number of new COVID-19 cases hit a record high this week. Voters are advised to attend poll stations with face masks and their own pens.