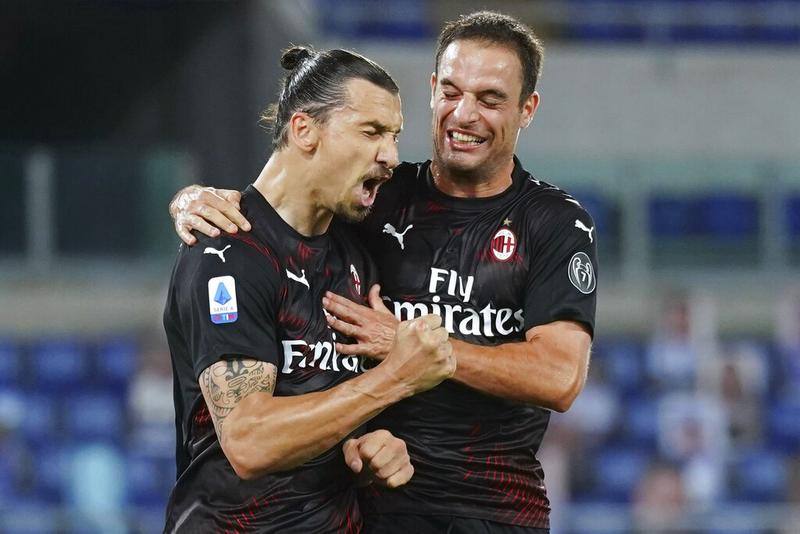 AC Milan's Zlatan Ibrahimovic, left, celebrates with Giacomo Bonaventura after scoring his side's second goal on a penalty during the Serie A soccer match between Lazio and AC Milan at the Rome Olympic stadium, July 4, 2020. (SPADA / LAPRESSE VIA AP)

ROME - Veteran forward Zlatan Ibrahimovic, starting his first match since the coronavirus stoppage, converted a penalty to help AC Milan to an emphatic 3-0 win at Lazio on Saturday, severely denting the Serie A title hopes of their ragged opponents.

Lazio, missing Serie A leading scorer Ciro Immobile through suspension, dropped seven points behind leaders Juventus with eight games to play after slumping to their first home defeat in the league this season.

The hosts were a far cry from the fluent and confident side which enjoyed a 21-match unbeaten league run from September till their season was interrupted by the COVID-19 pandemic in March.

The effort of having to come behind to win their last two games 2-1 seemed to take its toll and the confidence drained out of them after Milan went ahead.

Milan, unbeaten since the season re-start, climbed to sixth. 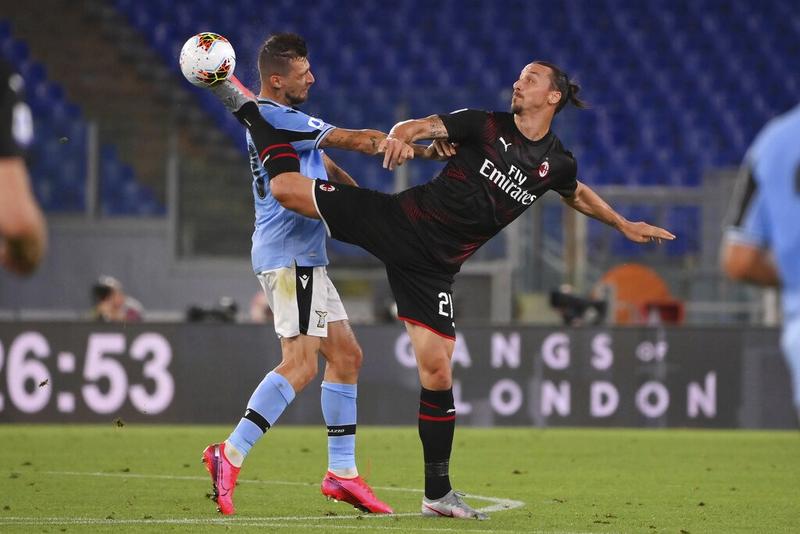 AC Milan's Zlatan Ibrahimovic, right, and Lazio's Sergej Milinkovic-Savic vie for the ball during the Serie A soccer match between Lazio and AC Milan at the Rome Olympic stadium, July 4, 2020. (ALFREDO FALCONE / LAPRESSE VIA AP)

Lazio’s other main striker, Felipe Caicedo, was also suspended although midfielder Lucas Leiva returned for the first time since a knee operation in April.

"It’s a heavy loss in terms of the standings,” said Lazio coach Simone Inzaghi. “We weren’t lucky in the key moments: in the first half, we conceded a goal from a deflected shot and another from a penalty.

“When we could have got back into it, we conceded the third goal which finished the game. But we won’t give up.”

It’s a heavy loss in terms of the standings.

The hosts could have gone in front early on when Jony fired a low ball across the face of the goal but two Lazio players failed to make contact.

Instead, Milan scored from their first real attack in the 23rd minute as Hakan Calhanoglu’s shot took a wicked deflection off Patric and looped over stranded Thomas Strakosha.

Ibrahimovic had a goal chalked off for offside but there was no reprieve two minutes later when Lazio defender Stefan Radu conceded a penalty for handball.

The 38-year-old Swede stepped up and, although Strakosha got a hand to it, the ball rebounded off his foot and into the net.

Lazio were wide open at the back and left Ante Rebic completely free to slot the ball past Strakosha in the 59th minute.

Theo Hernandez twice missed a chance for Milan’s fourth, the first after a solo run from near his own area.