A land of Smurfs in China

The tiny, blue, mushroom-dwelling characters who have captivated the world for generations have found a new home at a recently opened theme park, Xing Yi reports in Shanghai. 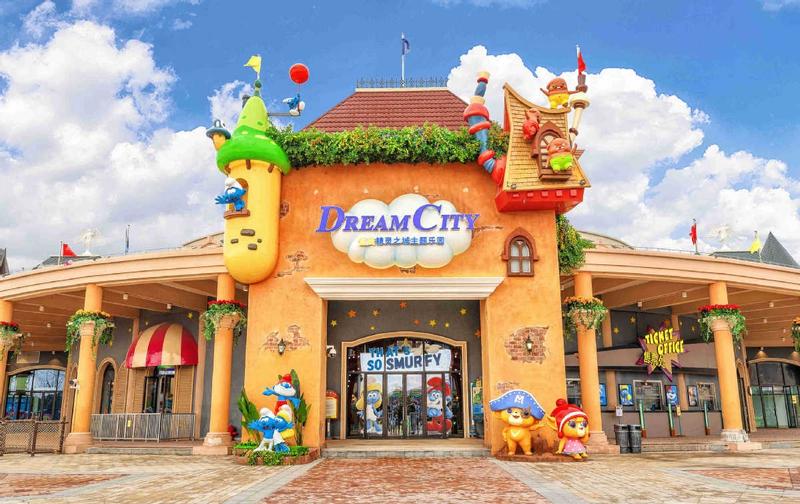 The entrance to Dream City－an indoor amusement park that houses the Smurf Theme Park as well as a theme park of the Chinese cartoon, Kimbaland Guardians, in Shanghai's Songjiang district. (PHOTO PROVIDED TO CHINA DAILY)

Just as the cartoon characters, Minions, are beloved by Chinese children, the Smurfs mesmerized their parents, who watched the series in the 1980s and '90s.

China's first Smurfs theme park opened in Shanghai on May 29, giving Chinese parents a nostalgic place to revisit their good-old memories and their children a new magical land to explore.

According to International Merchandising, Promotion and Services, the worldwide licensor of the Smurfs' cartoon images and brand, the world's only other two Smurfs theme parks are in Moscow and Dubai.

Our team immersed completely into the world and DNA of the Smurfs and analyzed the site … and an incredible Smurfy story was developed, which fits the building and budget perfectly

The park in suburban Songjiang district is about an hour's drive from downtown.

The Smurfs park is inside a larger indoor-entertainment park－Dream City, which is built by real estate developer Shimao Group.

Near Dream City's entrance is the Kimbaland Guardians area, where children ride bumper cars and race go-karts, and take a journey to the center of the Earth with the Chinese cartoon characters created by Shimao.

Beyond the Kimbaland, a giant gate resembling a jungle tells visitors they're entering Smurf territory.

First created by Belgian comic artist Pierre Culliford, known by his pen name, "Peyo", in 1958, the Smurfs are a group of small blue elves that are only three apples tall and live in mushroom houses in a secret village.

Visitors must navigate a forest maze to arrive at the Smurfs Village. It seems as if they've been magically shrunken to become Smurfs－they can check out their new identities at the Smurf Mirror, a digital-interaction screen that merges people's faces with those of such popular Smurf characters as Papa Smurf and Smurfette, who's the group's only female.

The village is where children meet their favorite Smurfs, explore and play in the mushroom houses and go on rides, the most popular of which is the Baker's Jam, a small, self-spinning rollercoaster that mimics the process of how Smurfs make their favorite berry jam. 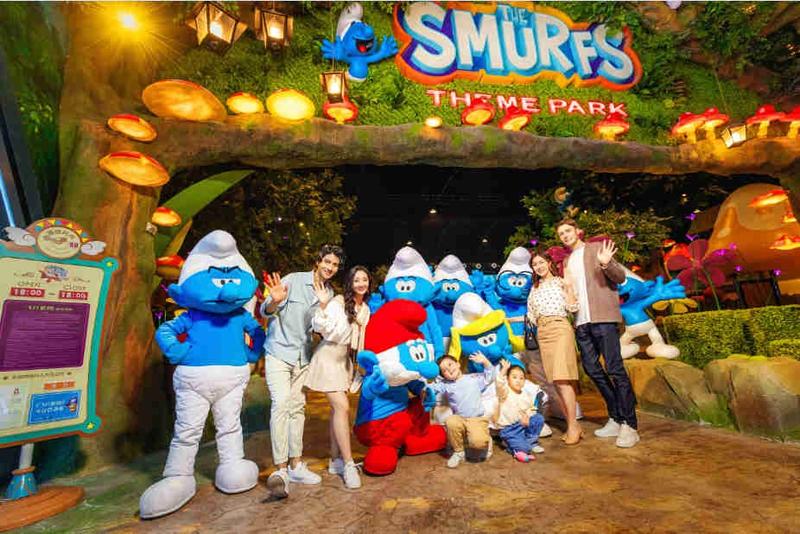 The villainous Gargamel's House is a thriller. In the cartoon, the evil wizard Gargamel is the Smurfs' arch nemesis and has a cat called Azrael.

Here, visitors can go through Gargamel's house, which is a ghost house full of different sounds, lights and motion effects, to rescue the captured Smurfs.

Belgium-based KCC Entertainment Design is behind the Shanghai park's concept and schematic design.

CEO Yannick Maes says in a news release: "Our team immersed completely into the world and DNA of the Smurfs and analyzed the site … and an incredible Smurfy story was developed, which fits the building and budget perfectly."

"The construction took around 400 days, and we're glad that the coronavirus has been controlled in Shanghai, so that we can open the park right before International Children's Day," he says, adding that the park received an average of 2,000 visitors a day in the past month. 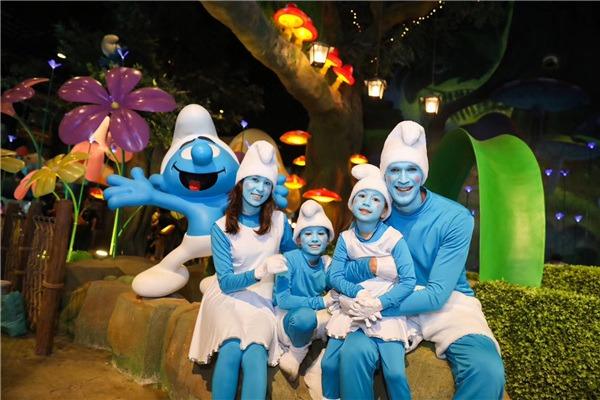 Shanghai-based photographer Ji Nan posted a photo of her daughter visiting the park on the Sina Weibo micro blog on June 13.

"My girl loves the movie Smurfs very much. So, I brought her to the theme park when I heard about it," the 30-year-old says during their second visit.

Other attractions adjacent to the park include the InterContinental Shanghai Wonderland hotel, built in a deserted quarry pit with 16 of its 18 floors underground and two floors underwater, and the Wonderland Area, another theme park developed by the Shimao Group featuring a glass plank road along the cliff of the quarry and a zipline.

Also nearby are the Shanghai Chenshan Botanical Garden and the Guangfulin Relic Park, an archaeological site hosting artifacts from over 4,000 years ago.