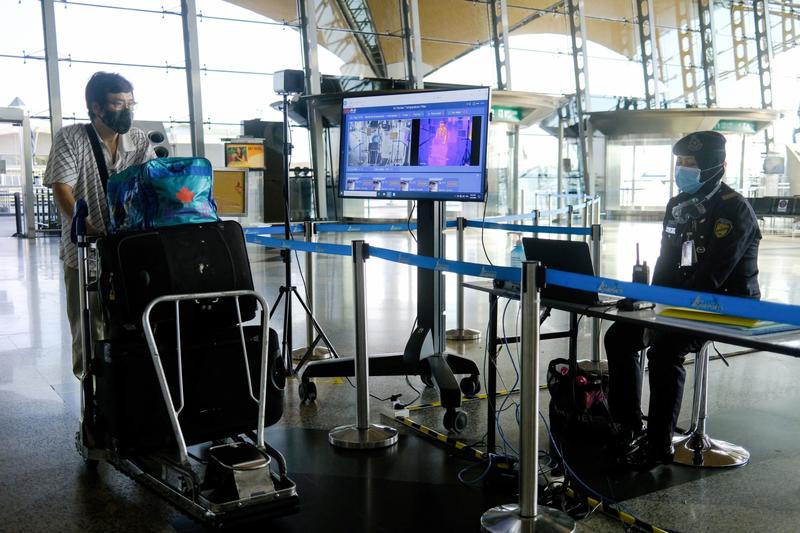 A monitor shows a thermographic image of a person walking through a temperature screening point at Kuala Lumpur International Airport (KLIA) in Sepang, Selangor, Malaysia on June 12, 2020. Malaysia further eased restrictions on people's movement, allowing most activities including domestic tourism to resume on June 10, after letting nearly all sectors of the economy to reopen in early May. (SAMSUL SAID / BLOOMBERG)

Malaysia is in talks with Singapore and Brunei to create “green lanes” for less restricted travel, as governments around the world seek to reopen their borders without a resurgence in coronavirus cases.

The country is discussing guidelines with its two neighbors and has approached Australia and New Zealand also, said the Ministry of Health’s Director General Noor Hisham Abdullah

The country is discussing guidelines with its two neighbors and has approached Australia and New Zealand also, said the Ministry of Health’s Director General Noor Hisham Abdullah, who oversees Malaysia’s Covid-19 response.

Other countries with no new cases for 28 days would be considered, he said.

“This is in planning but we have not allowed any country yet,” Noor Hisham said in an interview Thursday. “It must be mutual, some issues must be ironed out by both countries before we can allow the green lane or green bubble.”

Several places are trying to open up cross-border travel, but the continued spread of the virus has complicated efforts. Australia and New Zealand, for example, are still working on plans for a so-called trans-Tasman bubble allowing passenger flights between the two nations.

Malaysia’s Defense Minister Ismail Sabri Yaakob announced a partial reopening of the country’s borders last week, letting some foreign workers and medical tourists enter while allowing Malaysians to exit in an emergency or for work and study purposes.

Foreigners traveling from “green zone” countries Singapore, Brunei, New Zealand and Australia may not need to undergo 14-day home quarantine, though this depends on any mutual agreement, Noor Hisham said.

Malaysia is in the recovery stage of its pandemic response as the daily number of new cases falls to single digits, following about three months of lockdown measures that have largely been eased. The country expects to start to see days without any new infections by mid-July, Noor Hisham said.

“It’s not impossible, but the public has to comply and keep to the guidelines,” he said.

Malaysia has recorded a total of 8,600 confirmed coronavirus cases and 121 deaths. Singapore has more than 42,000 confirmed cases and 26 deaths, while Brunei has recorded 141 infections and three deaths, according to data from John’s Hopkins University.

Malaysia is looking at ways to allow visitors to resume normal activity sooner after they arrive. A company could bring in workers on urgent business by ensuring they travel straight from the airport to the workplace and don’t mix with the public, Noor Hisham said. Medical tourists could also head straight for procedures, with hospitals responsible for imposing quarantine at their facilities.

“If we can handle the pandemic as soon as possible, then the economy can actually continue and livelihoods can continue,” Noor Hisham said.