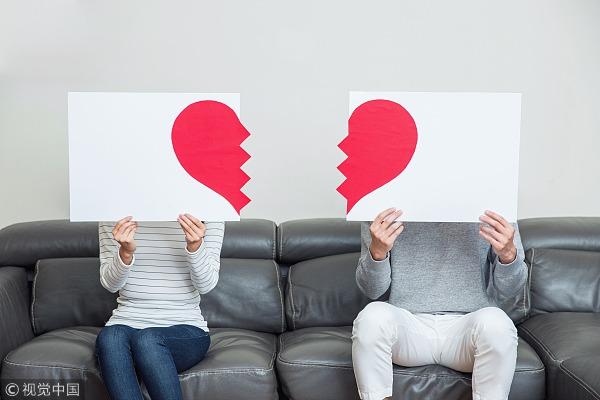 A cooling-off period before divorce, unveiled in a newly released law, will make people think twice before ending their relationship and isn't meant to stifle their marital freedom, legal experts said as they called for more social associations to help problematic couples solve disputes.

On May 28, China's first Civil Code was adopted by the National People's Congress, the country's top legislature. Among other rules, the code provides a 30-day cooling-off period for couples who apply for divorce. During the period, either party can withdraw their divorce application.

A couple must apply for a divorce at the civil affairs department, and the application will be approved after 30 days if neither party withdraws their applications, according to the Civil Code that will take effect on Jan 1

A couple must apply for a divorce at the civil affairs department, and the application will be approved after 30 days if neither party withdraws their applications, according to the Civil Code that will take effect on Jan 1.

If one side has second thoughts during that time, the application will become invalid and a new 30-day cooling-off period will start.

The provision quickly went viral on Chinese social media platforms and triggered widespread public outrage, as some people think it hampers their marital freedom and increases divorce costs. Some even expressed concern that the period could cause further harm to victims of domestic violence.

Yu Qi, a Beijing lawyer who has specialized in domestic disputes for more than a decade, told China Daily the new move is necessary, noting it will contribute to ensuring family stability and social order.

She said the cooling-off period aims to curb impulse divorces and alleviate the nation's ever-increasing divorce rates. But she added that a better way to root out the problem is to ask more social institutions to help couples better understand their relationships and make more sensible decisions.

The Legislative Affairs Commission with the NPC Standing Committee has also explained that the cooling-off period is only applicable to couples with an agreement to end a marriage, not all situations. Some extreme situations－including domestic violence, family abuse and drug use－are excluded and should be solved by lawsuit.

Cooling-off periods before divorce can be found in other countries such as the United Kingdom, France, Russia and South Korea, the commission said.

Statistics released in January showed that over 9.47 million couples registered for marriage at Chinese civil affairs departments last year, while 4.15 million filed for divorce, with the divorce rate consistently rising since 2003.

Chen Jie, who works at the civil affairs bureau in Chenghua district in Chengdu, Sichuan province, said he met some couples who remarried two or three days after they divorced, and some who have even married and divorced several times, according to a report by Sichuan-based news outlet Cover News on June 6.

Statistics released in January showed that over 9.47 million couples registered for marriage at Chinese civil affairs departments last year, while 4.15 million filed for divorce, with the divorce rate consistently rising since 2003

Yu, the lawyer, also said she might receive more than 900 calls a year from clients expressing their anger with their marriages and willing to divorce, but after a few days half the callers would tell her they were just arguing and don't really want to break up.

"Such impulses are not responsible actions for a relationship and a family," Yu said. "Divorce is not only for two people, but also relates to their children, property and the whole society."

Xia Yinlan, a law professor at China University of Political Science and Law, told China Central Television in an interview in May that the cooling-off period is a "time buffer" for couples attempting to divorce, calling their attention to using their legal rights prudently and asking them to shoulder more responsibilities for their marriages and families.

"The cooling-off period is an opportunity for those couples and will play a greater role in urging them to better deal with their domestic problems before they divorce," she added.

In response to situations of domestic violence or abuse, Xia, the professor, suggested they root out the problem by litigation, saying couples in such extreme situations have difficulty reaching an agreement to divorce.

"Intervention from public powers, including from public security authorities and courts, will give stronger protection for victims of domestic violence," she told CCTV.

The media quoted Xia as saying that victims can apply for personal protection orders in court first, and if domestic violence is identified, judges will end the marriage without hesitation.

Cao Qiaoqiao, a judge from Beijing Xicheng District People's Court said a common divorce litigation takes about three to six months. But if defendants are found to have committed bigamy, are taking drugs, gambling, or being physically or mentally abusive to their spouses, courts will approve divorces in the first hearing.

"There is no unlimited freedom. Marriage is no exception," he said. "The divorce process via government agencies in our country was too easy. Some people have not been clearly distinguishing a 'dead marriage' from an 'ill marriage', leading to reckless divorces."

According to Cao, divorces in some European nations must be done through litigation, "which is to let people know marriage is not a trifling matter."

But lawyer Liu still expressed concerns, saying it is too hard for victims to prove they were subjected to domestic violence.

"The damages sometimes are difficult to see or even invisible, such as by insults or abusing someone without scars, so it is not always easy for domestic violence to be identified in court," she said.

Therefore, she suggested lawmakers lower the threshold of evidence identification and review this situation as soon as possible to better protect victims' rights and reduce divorce costs.