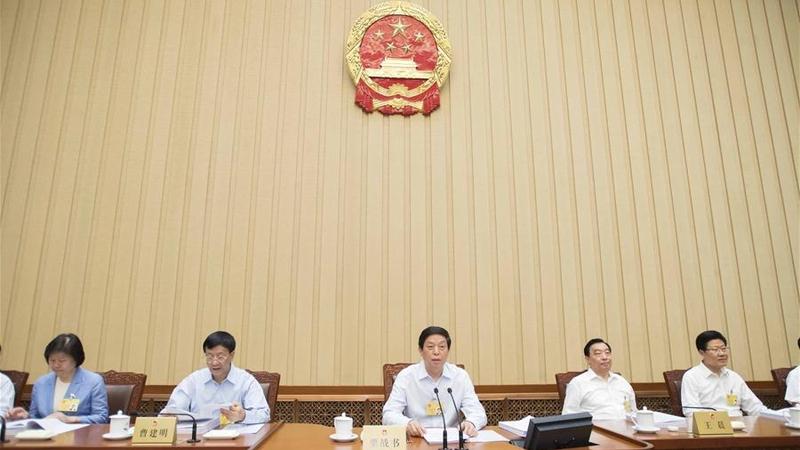 In this file photograph dated June 19, 2018, Li Zhanshu (center), chairman of the National People's Congress (NPC) Standing Committee, presides over a bi-monthly session of the 13th NPC Standing Committee at the Great Hall of the People in Beijing. (LI TAO / XINHUA)

China's top legislature began its bi-monthly session on Monday, with deliberating draft civil code sections and revisions to the individual income tax law on the agenda.

Six draft sections on specific areas of civil law were submitted to the top legislature for review, beginning the second phase of formulating the country's long-expected civil code.

Monday's meeting marked the beginning of the second phase, which is expected to run until 2020, according to Shen Chunyao, head of the Legislative Affairs Commission under the NPC Standing Committee.

During this week's session, the six draft sections were submitted as a package but may be put through follow-up readings for further deliberation, reviews, and revisions in different batches, Shen said while presenting the drafts at the meeting.

After that, the revised draft sections will be combined with the General Provisions to form a draft civil code and submitted to the plenary session of the NPC in March 2020, said Shen.

Explaining the draft to lawmakers at the start of the NPC Standing Committee session, Xu Hui, vice chairman of the NPC's Constitution and Law Committee, said it is necessary to revise the current law for taxation to play its role in adjusting income distribution.

Draft laws on farmland occupation taxes and vehicle purchase taxes were submitted for the first reading.

The building of military installations, schools, kindergartens, social welfare institutions, and medical institutions on farmland will be exempt from the farmland occupation taxes as well, it said.

According to the draft law on vehicle purchase taxes, entities and individuals should pay purchase taxes at a tax rate of 10 percent, same as the figure stated in the current interim regulation, for buying cars or motorcycles, streetcars or trailers with an engine displacement of over 150 milliliters.

It said tax authorities will decide the payable taxes in cases that taxpayers declare obviously low taxable prices with no warrant.

The draft e-commerce law was submitted to the NPC Standing Committee session for the fourth reading.

E-commerce platform operators may face a penalty of 500,000 yuan (US$73,420), or up to 2 million yuan (US$293,692) in serious cases, for failing to take necessary steps against intellectual property rights infringement by merchants, or unreasonably restricting transactions on the platforms, the draft law said.

It also said e-commerce operators should fulfill their obligations to protect the environment, adding that the State Council, local governments at or above county-level as well as related departments should take measures to support and promote environmentally friendly packaging, storage, and transportation in e-commerce.

The draft law on soil pollution prevention and control was submitted to the session for the third reading.

According to the draft, there will be national standards for soil pollution risk control, and a nationwide soil condition census should be conducted at least once every 10 years.

A network of monitoring stations are required to be established nationwide with data and other information collected shared among environmental, agricultural, natural resources, housing, water resources, health, and forestry and grassland authorities, it said.

Environmental and health authorities of the State Council are required to conduct screening and evaluation of toxic and harmful substances in the soil and make public a list of them.

According to a draft amendment to the criminal procedure law, a default judgment can be applied to not only corruption-related criminal cases, and also serious cases endangering state security and terrorist activities that have been examined and approved by the Supreme People's Procuratorate.

Lawmakers also reviewed other documents including a treaty of extradition between China and Barbados.

The legislative session will run until Friday.