US criticized for sanctions set to block Syria military victory 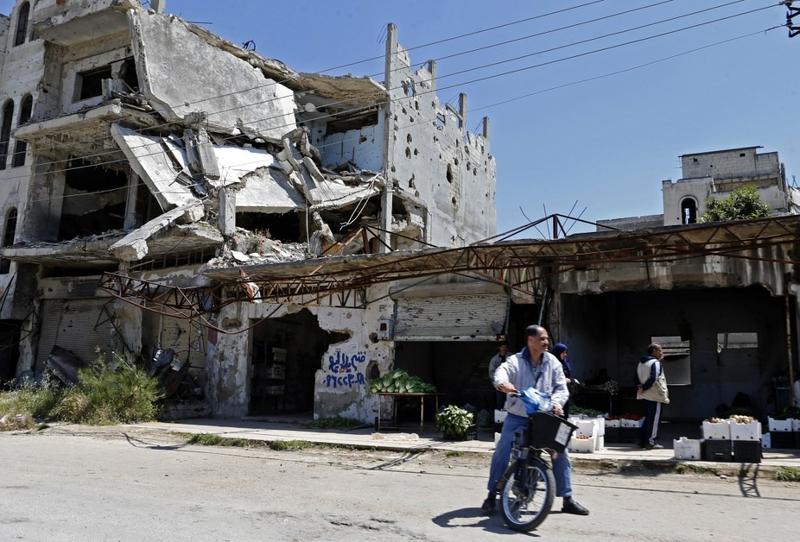 Syrians sell vegetables next to buildings heavily damaged during Syria's civil war in the central city of Homs on April 28, 2020 as Muslims mark the holy month of Ramadan. (LOUAI BESHARA / AFP)

NEW YORK / UNITED NATIONS / BEIRUT - The United States on Wednesday imposed its toughest sanctions ever targeting Syrian President Bashar al-Assad to choke off revenue for his government in a bid to force it back to United Nations-led negotiations and broker an end to the country's nearly decade-long war.

The fresh round of penalties on Syria, which designate Assad and his wife Asma personally, come at a time when Assad is grappling with a deepening economic crisis after a decade of war and amid a rare outbreak of protests in government-held areas.

In a statement announcing the designations imposed under the Caesar Syria Civilian Protection Act - signed by President Donald Trump in December - US Secretary of State Mike Pompeo said "many more" sanctions should be expected in the coming weeks and months.

We will not stop until Assad and his regime stop their needless, brutal war against the Syrian people and the Syrian government agrees to a political solution to the conflict.

"We will not stop until Assad and his regime stop their needless, brutal war against the Syrian people and the Syrian government agrees to a political solution to the conflict," Pompeo said.

He said the 39 designated individuals and companies have played a key role in obstructing a peaceful political solution to the conflict, and singled out Asma al-Assad.

"I will make special note of the designation for the first time of Asma al-Assad, the wife of Bashar al-Assad, who with the support of her husband and members of her Akhras family has become one of Syria’s most notorious war profiteers," he said.

Syrian authorities blame Western sanctions for widespread hardship among ordinary residents, where the currency collapse has led to soaring prices and people struggling to afford food and basic supplies.

Russia and China criticized the latest US sanctions. Russia’s UN Ambassador Vassily Nebenzia said the United States had confirmed “that the purpose of these measures is to overthrow the legitimate authorities of Syria.”

China’s UN Ambassador Zhang Jun said that “as vulnerable countries like Syria are struggling with the (coronavirus) pandemic, imposing more sanctions is simply inhumane and may cause additional catastrophes.”

Addressing a separate meeting of the Geneva-based UN Human Rights Council on Tuesday, Syria’s UN Ambassador Bashar Ja’afari, accused Washington of trying to impose US law on the world and flouting calls for it to end unilateral sanctions.

A crackdown by Assad on pro-democracy protesters in 2011 led to civil war, with Moscow backing Assad and Washington supporting the opposition. Millions of people have fled Syria and millions are internally displaced.

Hezbollah Leader Hassan Nasrallah assured on Tuesday that Syria's allies will not allow the economic fall of the country as a result of the new US sanctions, Al Manar local TV channel reported.

"Syria's allies will continue to support Syria facing its economic war with the United States. The Syrians have to be patient and cooperative during the tough time," Nasrallah said in a televised speech.

UN Syria mediator Geir Pedersen on Tuesday sounded the alarm over the dramatic collapse in economic conditions throughout the country. The Syrian lira is losing value and the inflation rate has hit peak levels in the past six months, he told a virtual meeting of the Security Council.

He said the economic crisis was hitting every part of Syria, regardless of territorial control, with medicine now more expensive and scarce while food prices have skyrocketed with supply chains having been disrupted.

The purchasing power of ordinary Syrians has seriously diminished as wages -- both private and public sector -- are vastly inadequate to meet the demands of the day, he said.

Before this recent deterioration, over 80 percent of Syrians were estimated to be living below the poverty line.

The situation is more severe today, and the intensity of that poverty is likely more acute, he said, adding that the World Food Programme now estimates that some 9.3 million people are food insecure, with over 2 million more at risk.

Pedersen also told the Security Council he hoped to convene opposing sides in Syria’s civil war in Geneva for negotiations on the constitution toward the end of August. The constitutional committee negotiations struggled to make headway last year.