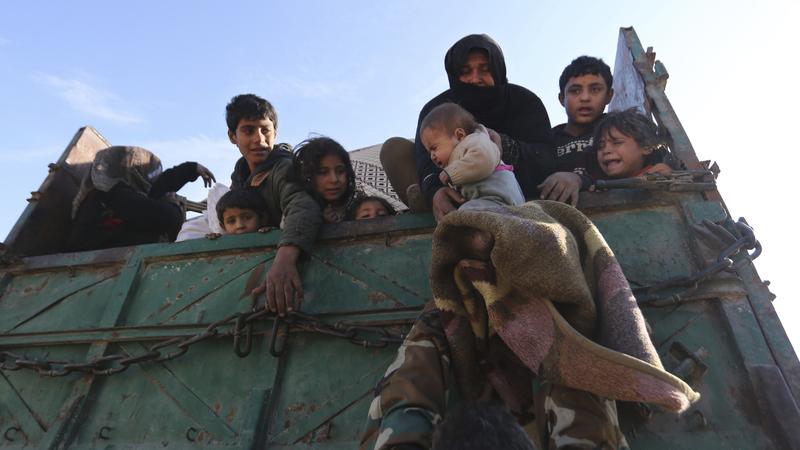 In this file photo, a baby is lifted onto a truck carrying civilians fleeing Maaret al-Numan, Syria on Dec 22, 2019.(GHAITH AL-SAYED / AP)

DAMASCUS - The Syrian Foreign Ministry on Thursday condemned the EU (European Union) extension of its sanctions against the Syrian government, according to the state news agency SANA.

In a statement, the ministry said the EU decision to renew sanctions on the Syrian government for another year underscores EU support for "terrorist groups" in Syria

In a statement, the ministry said the EU decision to renew sanctions on the Syrian government for another year underscores EU support for "terrorist groups" in Syria.

It said the "unjust" sanctions directly affect the Syrian people and their livelihoods as well as public health in the country amid the COVID-19 pandemic.

Earlier on Thursday, EU foreign ministers decided to extend sanctions for one more year against the government of President Bashar al-Assad and its supporters.

The restrictive EU measures have been in place since 2011.

On May 18, Syrian Health Minister Nizar Yazigi called for the lifting of Western sanctions against Syria so that the country could ensure the health of its people amid the COVID-19 pandemic.

Yazigi said the medical teams in Syria are responding to the COVID-19 pandemic "with bravery in exceptional circumstances" as the country has suffered from a war that has lasted for more than a nine years amid sanctions imposed by the United States and its Western allies.

The sanctions are "inhuman" and prevent the medical sector in Syria from responding to the pandemic and securing the necessary tools for protection and diagnosis, he added.

The minister made the remarks as Washington moves closer to implementing the Caesar Syria Civilian Protection Act, a US law that sanctions the Syrian government, including President al-Assad, for its alleged war crimes against the Syrian people.

The Caesar Act, expected to be implemented in June, also includes sanctions on any side that might aid the Syrian government.