Protests roll on against 'worldwide' racism 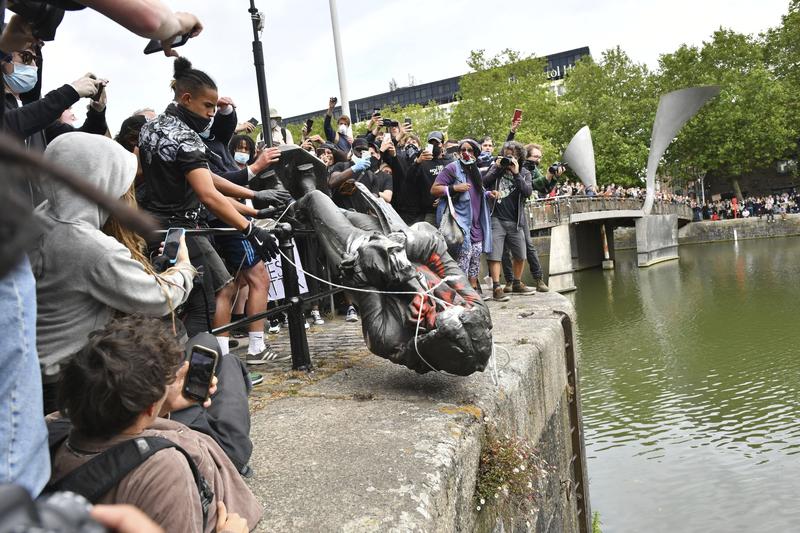 Protesters throw a statue of slave trader Edward Colston into Bristol harbour, during a Black Lives Matter protest rally, in Bristol, England, June 7, 2020, in response to the recent killing of George Floyd by police officers in Minneapolis, USA, that has led to protests in many countries and across the US. (BEN BIRCHALL / PA VIA AP)

ROME/LONDON - Demonstrators in Rome held their fists in the air and chanted “No Justice! No Peace!” on Sunday, while in London people defying official warnings not to gather lay down outside the US Embassy as part of a rolling, global anti-racism movement.

In Belgium, police fired tear gas and used a water cannon to disperse about a hundred protesters in a central part of Brussels with many African shops and restaurants. Some protesters were subsequently arrested.

They were part of a crowd of about 10,000 who had gathered at the Palace of Justice, many wearing face masks and carrying banners with the phrase “Black Lives Matter - Belgium to Minneapolis”, “I can’t breathe” and “Stop killing black people”.

The second weekend of demonstrations showed the depth of feeling worldwide over the death of George Floyd in Minneapolis on May 25 after a white officer detaining him knelt on his neck. More protests were also planned across the United States.

In London, where tens of thousands gathered, one banner read: “UK guilty too.”

Footage posted on social media showed demonstrators in Bristol in western England cheering as they tore down a statue of Edward Colston, a 17th century slave trader, and pushed it into a river. 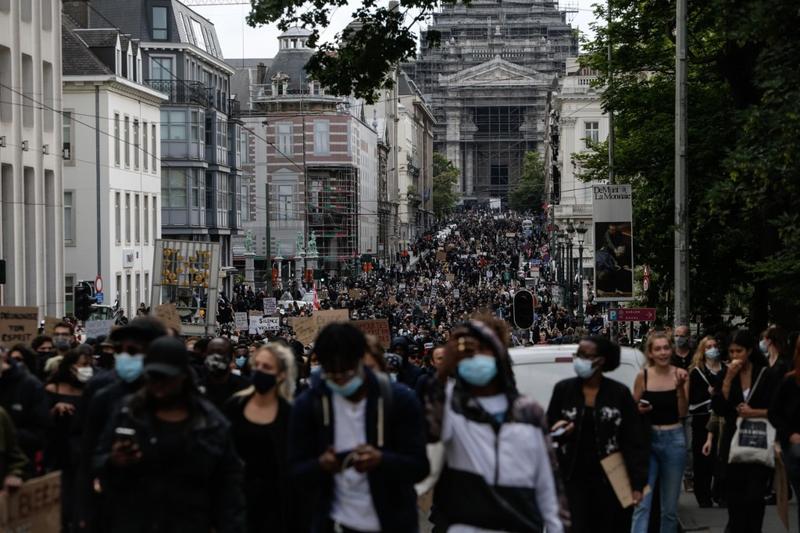 People take part in an anti-racism protest, in Brussels, on June 7, 2020, as part of a weekend of 'Black Lives Matter' worldwide protests against racism and police brutality in the wake of the death of George Floyd, an unarmed black man killed while apprehended by police in Minneapolis, US. (ARIS OIKONOMOU / AFP)

Chaniya La Rose, a 17-year-old student at the London protest with her family, said an end to inequality was long overdue. “It just needs to stop now,” she said. “It shouldn’t have to be this hard to be equal.”

Health minister Matt Hancock had earlier said that joining the Black Lives Matter protests risked contributing to the spread of the coronavirus.

London police chief Cressida Dick said 27 officers had been injured in assaults during protests this week in the city, including 14 on Saturday at the end of a peaceful demonstration.

In Italy, where several thousand people gathered in Rome’s Piazza del Popolo, speakers called out racism at home, in the United States and elsewhere.

US embassies were the focus of protests elsewhere in Europe, with more than 10,000 gathering in the Danish capital Copenhagen, hundreds in Budapest and thousands in Madrid, where they lined the street guarded by police in riot gear.

In Spain, thousands of people added their voices to the "Black Lives Matter" protests worldwide. According to Spanish TV station RTVE, an estimated 3,000 people took part in a demonstration in Madrid, which began outside the US embassy.

The Spanish Government Delegate had given permission for 200 people to participate in the protest, but far more people than expected turned up to show their support, as also happened in other European cities. 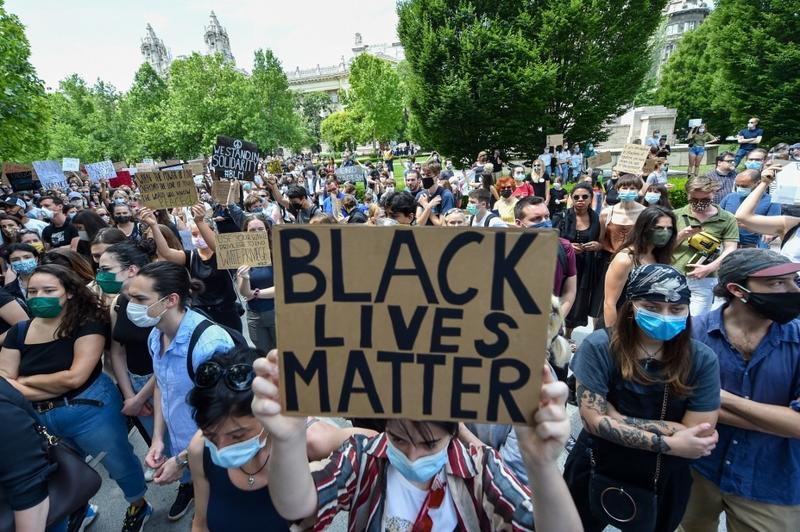 People take part in a protest on June 7, 2020 at Szabadsag square (Freedom square) in front of the US embassy in Budapest, in solidarity with protests raging across the US over the death of George Floyd, an unarmed black man who died during an arrest on May 25. (ATTILA KISBENEDEK / AFP)

“I really think we need to finish with the institutional racism that is actually international,” said Gloria Envivas, 24, an English teacher in the Spanish capital.

“It’s not something that is only going on in the USA or in Europe, it’s also worldwide.”

In the Hungarian capital Budapest, more than 1,000 people gathered at a peaceful demonstration in front of the US embassy. Almost all of the protesters wore masks. The police presence was strong, but they did not intervene.

Demonstrators, mostly young Hungarians, held up banners reading "Black Lives Matter" at the front of the demonstration. Other banners displayed messages such as "Police everywhere -- justice nowhere" or "No Justice -- No Peace."

In Thailand, people held an online demonstration on the video platform Zoom, due to restrictions on movement to prevent the spread of the coronavirus.

“Everyone has hopes, everyone has dreams, everyone bleeds red, you know,” said Natalie Bin Narkprasert, an organiser of the Thai protest.

READ MORE: 5 cops shot during protests after Trump vows to bring in military 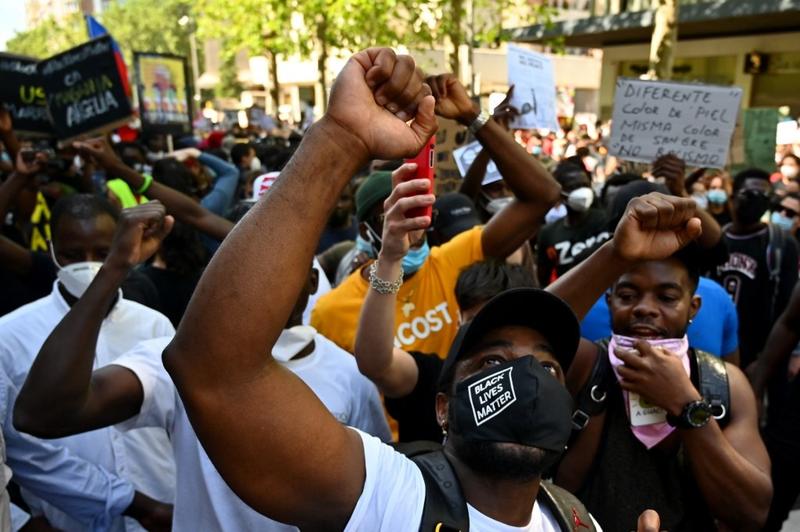 A man wears a mask reading "Black Lives Matter" in Madrid, on June 7, 2020, during a demonstration against racism and in solidarity with the Black Lives Matter movement, in the wake of the killing of George Floyd, an unarmed black man who died after a police officer knelt on his neck in Minneapolis. (GABRIEL BOUYS / AFP)

Like many people around the world, the group observed a silence in memory of Floyd, in this case, for 8 minutes and 46 seconds - the period he was pinned under the officer’s knee - to know “how it feels”.

On Saturday, tens of thousands of people took to the streets of other European cities like Berlin, Paris, Munich, Hamburg, Frankfurt, Dublin and Prague in support of the "Black Lives Matter" movement.

Other gatherings were due later, including in the United States, where tens of thousands of demonstrators amassed in Washington and other US cities on Saturday.