Protests heat up as curfews imposed in several US cities 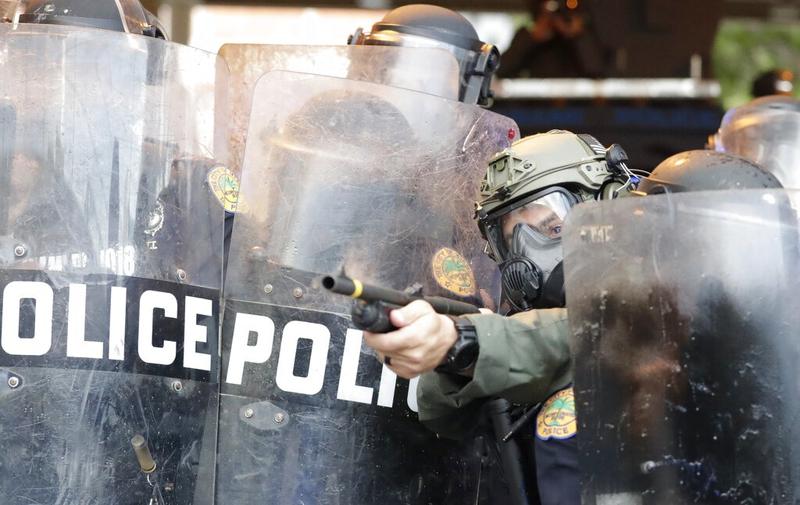 A policeman shoots rubber bullets at protesters throwing rocks and water bottles during a demonstration next to the city of Miami Police Department, May 30, 2020, downtown in Miami. Protests were held throughout the country over the death of George Floyd, a black man who died after being restrained by Minneapolis police officers on May 25. (WILFREDO LEE / AP)

MINNEAPOLIS – Civil unrest flared and curfews were imposed in several major US cities on Saturday as demonstrators took to the streets to vent outrage at the death of a black man shown on video gasping for breath as a white Minneapolis policeman knelt on his neck.

From Los Angeles to Miami to Chicago, protests marked by chants of “I can’t breathe” – a rallying cry echoing the dying words of George Floyd – began peacefully before turning unruly as demonstrators blocked traffic, set fires and clashed with riot police, some firing tear gas and plastic bullets in an effort to restore order.

The sight of protesters flooding streets fueled a sense of crisis in the United States after weeks of lockdowns due to the coronavirus pandemic, which has seen millions thrown out of work and has disproportionately affected minority communities.

In the nation’s capital, hundreds of demonstrators assembled near the Justice Department headquarters shouting, “black lives matter.” Many later moved to the White House, where they faced off with shield-carrying police, some mounted on horseback.

President Donald Trump said on Saturday that if protesters who gathered the night before in Lafayette Square, across from the White House, had breached the fence, “they would have been greeted with the most vicious dogs, and most ominous weapons, I have ever seen.”

READ MORE: Unrest flares in US cities despite arrest of Minneapolis policeman

The full Minnesota National Guard was activated for the first time since World War Two after four nights of arson, looting and vandalism in parts of Minneapolis, the state’s largest city, and its adjacent capital, St. Paul.

Minnesota Governor Tim Walz said the deployment was necessary because outside agitators were using protests over Floyd’s death to sow chaos.

“We are under assault,” Walz, a first-term governor elected from Minnesota’s Democratic-Farmer-Labor Party, told a briefing on Saturday. “Order needs to be restored.”

Separately, US Attorney General William Barr also pointed the finger at extremist instigators, though he and Walz – neither offering evidence to support their assertions – suggested opposite ends of the political fringe were to blame.

Civil rights activists said video of Floyd’s arrest on Monday – captured by an onlooker’s cellphone as he repeatedly groaned, “please, I can’t breathe” before he died – triggered an outpouring of rage long simmering over persistent racial bias in the US criminal justice system.

But the rapidly spreading protests also coincided with a deep-seated national discontent over the social claustrophobia and economic carnage wrought by the coronavirus pandemic.

In a surreal moment for Miami on Saturday, police sirens and lights flooded downtown neighborhoods as fireworks began crackling and booming over Biscayne Bay to honor healthcare workers fighting the pandemic. Hundreds of police in riot gear swarmed the area, threatening to arrest anyone, including media, who ventured onto the streets. 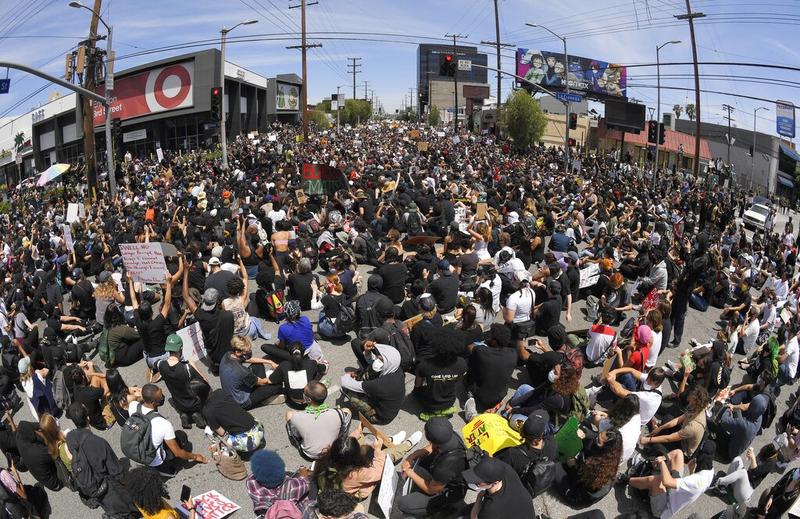 In this photo taken with a wide-angle lens, demonstrators sit in an intersection during a protest over the death of George Floyd, May 30, 2020, in Los Angeles. (MARK J TERRILL / AP)

In an extraordinary move, the Pentagon said it put military units on a four-hour alert to be ready if requested by the Minnesota governor to help keep the peace.

National Guard units also were mobilized by the governors of Ohio, Missouri, Wisconsin and Tennessee.

The streets of Minneapolis were largely quiet during the day on Saturday. Several armored National Guard vehicles were seen rolling through town and authorities later closed major highways leading in and out of Minneapolis-St. Paul. 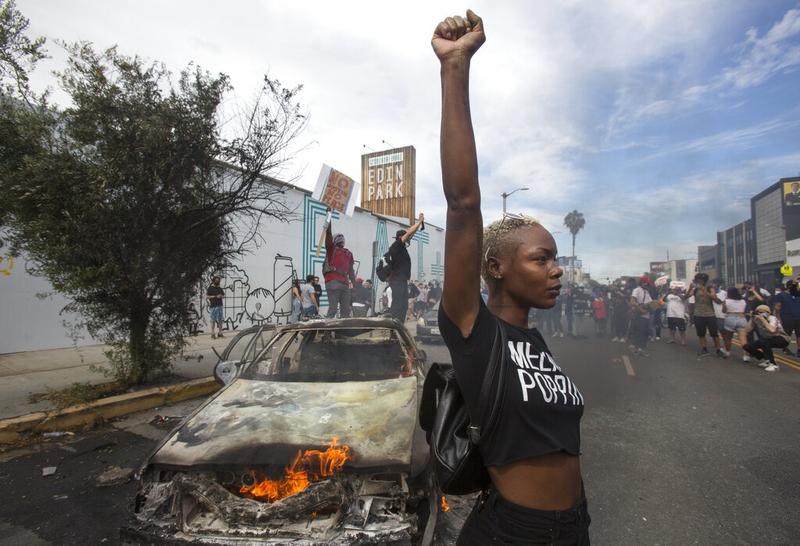 A protester poses for photos next to a burning police vehicle in Los Angeles, May 30, 2020, during a demonstration over the death of George Floyd.  (RINGO HW CHIU / AP)

At dusk, as the curfew went into effect, police confronted some 500 protesters milling around a burned-out bank and opened fire with tear gas and plastic bullets, sending the crowd scurrying.

It marked the fifth night of such clashes, the second since Friday’s announcement that Derek Chauvin, the policeman seen kneeling on Floyd’s neck, had been arrested on murder charges in Floyd’s death.

Floyd, who had worked security for Minneapolis nightclubs, had been suspected of trying to pass counterfeit money to buy cigarettes on Monday evening. Police said he was unarmed. A store employee who had called for help had told a police dispatcher that the suspect appeared to be intoxicated.

Three other officers dismissed on Tuesday from the police department with Chauvin, who was known to have worked off-duty security at one of the same nightclubs as Floyd, are also under criminal investigation in the case, prosecutors said. 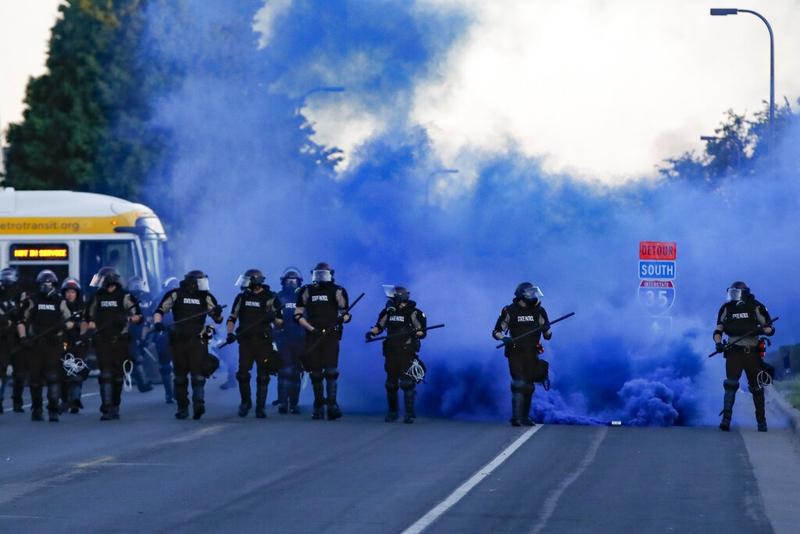 Police in riot gear prepare to advance on protesters, May 30, 2020, in Minneapolis. (JOHN MINCHILLO)

Thousands flooded Chicago streets for a second day of protests. Cellphone footage shared with Reuters showed an overturned SUV, a patrol car on fire, a person burning the American flag and a skirmish between demonstrators and police.

In the Brooklyn borough of New York City, video footage recorded by onlookers showed a police squad car driving into a crowd of protesters during a second day of violence after more than 200 arrests were made on Friday.

“They could’ve killed them, & we don’t know how many they injured,” US Representative Alexandria Ocasio-Cortez wrote on Twitter, demanding the NYPD officers be brought to justice.

“The video was upsetting, and I wish the officers hadn’t done that,” de Blasio said. “But I also understood that they didn’t start the situation. The situation was started by a group of protesters converging on a police vehicle, attacking that vehicle.”

The mayor said flare-ups of violence were primarily instigated by small numbers of outsiders determined to goad police into confrontations, a phenomenon authorities said was playing out across the country.

Protesters in Los Angeles clashed with police in the city’s Fairfax district, where crowds tried to force their way into the CBS Television City studios but were repulsed by law enforcement and security officers, the Los Angeles Times said.

Looters broke into stores at The Grove shopping center in Fairfax, TV reported, as well as into shops along the famed Rodeo Drive of wealthy Beverly Hills.

Los Angeles Mayor Eric Garnett told reporters, “This is no longer a protest. This is vandalism ... this is destruction.”