By ​Aybek Askhar in Urumqi 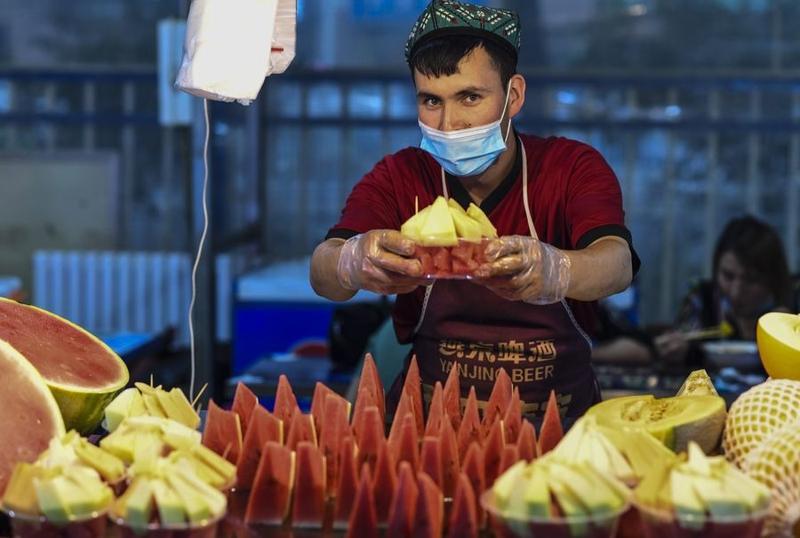 A vendor holds up a bowl of freshly sliced fruits at a night fair in Hotan, Northwest China's Xinjiang Uygur autonomous region, May 18, 2020. (PHOTO / XINHUA)

The Xinjiang Uygur autonomous region's government denied on Monday an allegation that Muslims were barred from fasting in the region during Ramadan and said this had been fabricated by overseas "East Turkestan" forces.

Recently, "East Turkestan" forces, which aim to split Xinjiang from China, alleged the region had banned Muslims from Ramadan fasting, and the website of the "World Uygur Congress "announced its plan to post video clips alleging Uygur people were subject to "persecution" during Ramadan.

The intentions they harbor are extremely vicious. Indisputably, Xinjiang has enjoyed harmony and orderly religious activities during the fasting month.

"The fasting ban allegations by the forces abroad are nonsense. During every Ramadan, they habitually copy and spread such rumors all the time, recklessly attacking Xinjiang," Ilijan Anayt, spokesman for the regional government, said during a news conference on Monday.

Ilijan said no citizen is discriminated against or mistreated for believing in or not believing in a religion in Xinjiang, and believers' legal religious activities either performed at religious venues or at home, such as prayers and fasting, are managed by religious groups or believers themselves and protected by law.

As for videos showing so-called persecution of Uygur people, Ilijan said these are fakes, which intend to sow discord among ethnic groups, disrupt ethnic relations, and incite ethnic antagonism in the region.

"The intentions they harbor are extremely vicious. Indisputably, Xinjiang has enjoyed harmony and orderly religious activities during the fasting month," said Ilijan.

Meanwhile, in response to an allegation that the region's vocational and training centers face the risk of a large-scale novel coronavirus outbreak, the spokesman said this is a groundless and totally ridiculous accusation.

"Colluding with some United States and Western anti-China politicians, the 'East Turkestan' forces want to politicize the pandemic and stigmatize China in the guise of COVID-19, and their despicable behavior proves nothing but their obsequious mentality and vicious intention acting on behalf of US-led Western anti-China forces," said Ilijan.

According to the regional government, there were 76 confirmed cases of COVID-19 in Xinjiang, and no new cases have been reported for more than 100 consecutive days.

"Through joint efforts made by people in Xinjiang of all ethnic groups, the pandemic situation in the region has been effectively curbed," Ilijan added.

Xinjiang set up vocational and training centers in accordance with the law to provide courses on Mandarin, laws, vocational skills and deradicalization programs for people influenced by religious extremism and terrorism. According to the regional government, all the trainees in the centers graduated in December 2019.

"Since all the trainees have left the centers, secured stable employment and started a happy life, how can there be a risk of large-scale infection in the centers?" he asked.