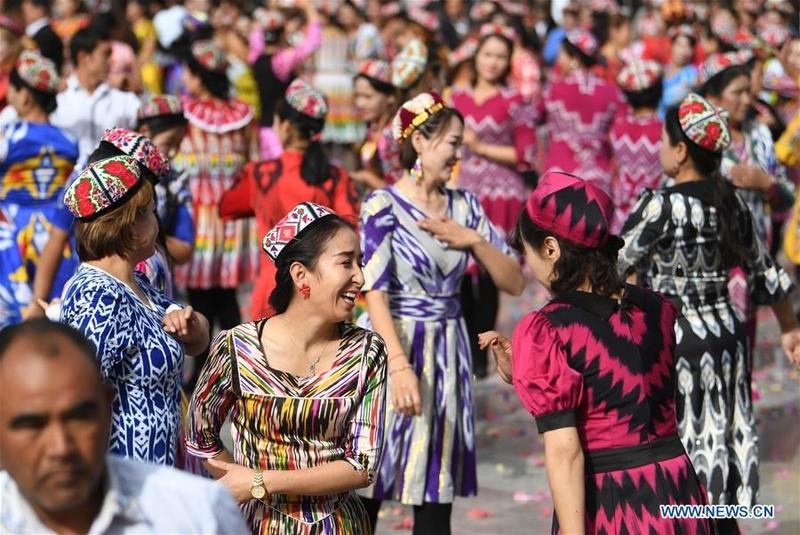 Measures to combat terrorism and extremism introduced in the Xinjiang Uygur autonomous region－as a way to deal with a grave, complicated situation that has caused mass casualties－do not target people of certain ethnic groups or with certain religious beliefs, a government authority familiar with the matter said.

The statement came after the United States House of Representatives passed a bill that calls on China to end so-called arbitrary detention, torture and harassment of Uygurs.

The accusation that people from certain ethnic groups are being oppressed in Xinjiang in the name of fighting terrorism and extremism is pure slander, a government authority said

From 1990 to 2016, forces of terrorism, extremism and separatism in China and abroad have plotted, organized and conducted thousands of violent terrorist attacks in Xinjiang including bombings, assassinations, poisoning, arson, assaults, unrest and riots, causing the deaths of a large number of innocent people and hundreds of police officers, as well as immeasurable property damage, the authority said.

Xinjiang is the home of people from more than 14 ethnic groups including Uygur, Kazak, Kirgiz and Han. Many are Muslims. Since the 1990s, influenced by the spread of extremism globally, "East Turkestan" forces from home and abroad have worked together to seek independence for so-called East Turkestan in Xinjiang by launching a jihad, or holy war. They instigated the public to launch violent attacks in the name of religion, it said.

Xinjiang authorities have dealt with 4,858 illegal religious activities involving 30,645 people since 2014 while ensuring that the people's right of religious belief is well protected, the authority said. The region has more than 20,000 religious facilities, and there is a mosque for every 500 Muslims in Xinjiang, a ratio even higher than in some Islamic countries, it said.

Terrorist, extremist and separatist forces interfered with Xinjiang people's lives in the name of religion. They were promoting religious extremism and frequently plotting violent terrorist attacks in the region, said Ma Pinyan, a researcher at the Xinjiang Academy of Social Sciences.

"Religious extremism is not religion and has nothing to do with the real doctrines. Anti-extremism measures aren't there to eliminate religion, but to remove the ideological foundation of terrorism from the root," Ma said.

The measures have controlled the social situation and religious extremism is effectively contained. More importantly, people are now feeling more secure, Shohrat Zakir, chairman of the regional government, said on many public occasions this year.

No terrorist incident has taken place in Xinjiang for almost three years. Criminal cases including those that endanger public security have also dropped significantly, the authority said.

Certain countries and organizations have imposed double standards when facing anti-terrorist and extremist issues. Such behavior will actually further encourage terrorism and extremism, it added.