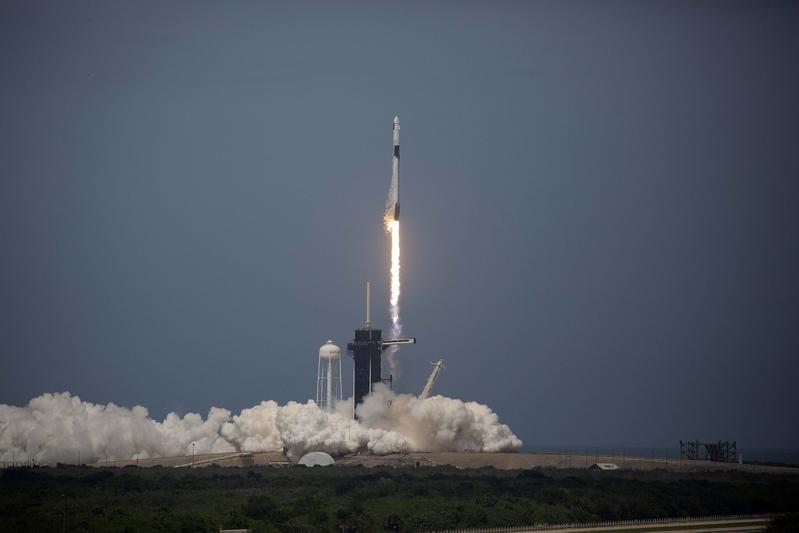 The SpaceX Falcon 9 rocket launches from the Kennedy Space Center on May 30, 2020 in Cape Canaveral, Florida in the US. (SAUL MARTINEZ / GETTY IMAGES VIA BLOOMBERG)

The Dragon craft carrying NASA astronauts Bob Behnken and Doug Hurley arrived at the orbiting lab at 10:16 am Eastern time Sunday, about 19 hours after lifting off from the Kennedy Space Center in Cape Canaveral, Florida.

“We have to congratulate the men and women of SpaceX,” Hurley said after the docking, while going through procedures required before the men could enter the station. “Their incredible efforts over the last several years to make this possible cannot go overstated.”

“This is an incredible time to be at NASA,” he said, noting three manned-vehicle programs in the works and progress toward a return to the moon.

The milestone flight marked the first time that humans have traveled to orbit in a commercially developed spacecraft -- and the first time American astronauts have flown from US soil since the space shuttle program ended in 2011. The achievement comes 18 years after Musk founded Space Exploration Technologies Corp with the ultimate goal of populating other planets.

“Today was just an amazing day,” NASA Administrator Jim Bridenstine said after Saturday’s launch, which was watched live by approximately 10 million people. “I’m breathing a sigh of relief, but I’m not going to celebrate until Bob and Doug are home safely.”

ALSO READ: Musk unveils SpaceX rocket designed to get to Mars and back

The highest-profile US rocket launch in decades captured interest around the globe, coming at a time when people are clamoring for good news amid the Covid-19 pandemic, surging unemployment and growing US protests against police violence.

President Donald Trump and Vice President Mike Pence were among those who gathered with Musk to watch the spectacle. Trump spoke with the two astronauts prior to the launch and, in a brief exchange with reporters, referred to Musk as one of the “great brains,” according to a pool report.

The rooftop shook as the rocket rumbled to orbit, according to the report. Within seconds, Elton John’s “Rocket Man” -- a Trump rally classic -- began to play over speakers, the report said.

“They have a long way to go but that’s a very dangerous part of it there,” Trump said. “I’m so proud of the people, of NASA, public and private. When you see a sight like that, it’s incredible. When you hear that sound — the roar — you can imagine how dangerous it is.”

The launch and the initial phases of the journey proceeded smoothly. The main rocket booster flew back to Earth and stuck the landing on a drone ship -- a once-remarkable feat that has become routine for SpaceX.

The two astronauts will meet later Sunday with the Expedition 63 crew members already in residence on the space station. Their voyage, known as Demo-2, is the final major test of SpaceX’s human spaceflight system before the National Aeronautics and Space Administration certifies it to fly working missions to the space station.

Boeing Co is also preparing to carry people to the orbiting lab as part of the same Commercial Crew program at NASA.

The SpaceX launch was originally slated for May 27, but was scrubbed due to bad weather. While rain showers earlier Saturday briefly raked launch complex 39A, the weather cleared and SpaceX loaded fuel onto the Falcon 9 rocket and moved through a final check of its systems.

Gwynne Shotwell, the company’s president and chief operating officer, said she was “super-nervous, stomach-in-throat,” in a television interview from SpaceX headquarters minutes before lift-off. Shotwell and her team monitored the mission from the company’s control center in Hawthorne, California, wearing masks and sitting at carefully spaced terminals.

Successfully carrying humans to space would mark the latest breakthrough for a company known for setting audacious goals. In the decade since the first Falcon 9 rocket reached orbit, SpaceX has eclipsed rivals like Europe’s Arianespace and United Launch Alliance, a Boeing-Lockheed Martin Corp venture, to grab the lead of commercial launches. 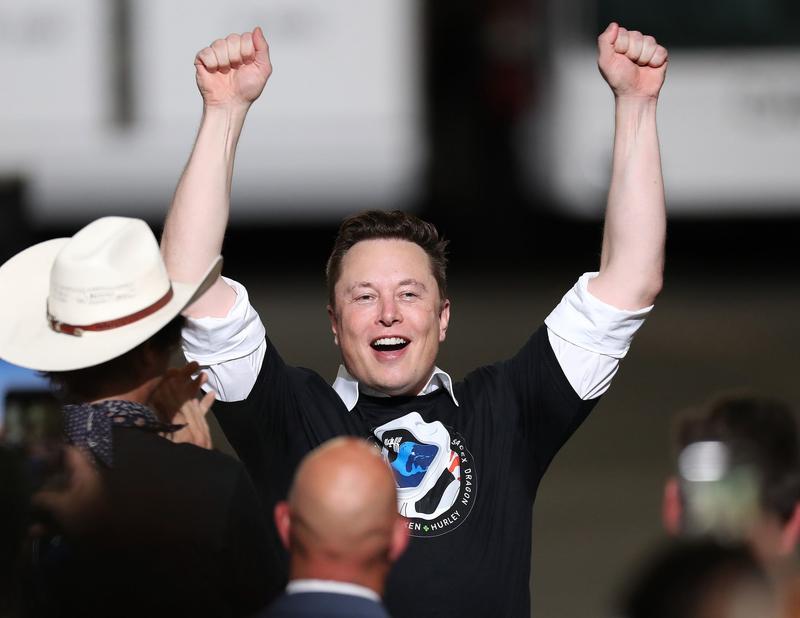 Elon Musk celebrates after the successful launch of the SpaceX Falcon 9 rocket on May 30, 2020, in Cape Canaveral, Florida in the US. (JOE RAEDLE / GETTY IMAGES VIA BLOOMBERG)

“Launching satellites is nice and we got to bring in more money than we spend, this is important, but ultimately this is life beyond earth,” Musk said at a briefing after the launch, where he recalled how he developed SpaceX with funds he got from PayPal. “Hopefully this is the first step on that journey” for “life becoming multi-planetary for the first time.”

Musk’s space company is valued at about US$36 billion, and its bravado and reusable rockets have inspired other entrepreneurs. The competition could get fierce this decade as Blue Origin, founded and funded by billionaire Jeff Bezos, Northrop Grumman Corp, ULA and Sierra Nevada Corp. all bring new spacecraft to market.

At least that’s the dream for Bridenstine, the NASA administrator. The US space agency is seeking to change the notion that government must create both demand and supply for spaceflight. He said at a post-launch briefing that NASA is seeking a business model where it’s not the only customer.

“We want to have numerous providers competing on cost, innovation and safety,” he said in an interview on Bloomberg TV on May 27.

Commercial spaceflight has taken a long time to evolve since 2001, when engineer and entrepreneur Dennis Tito, founder and CEO of Wilshire Associates, became the first private individual to buy a seat to space aboard a Russian Soyuz rocket.

Now, with the financial disruption from Covid-19 injecting fresh uncertainty into the industry’s immediate future, Bridenstine vowed to push ahead. He said he hoped the moment would be a bright spot amid the nation’s many challenges.