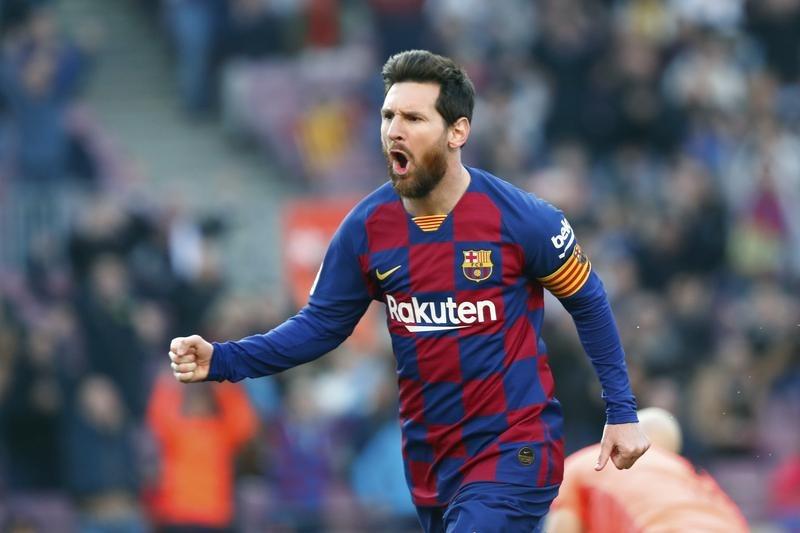 In this Feb 22, 2020 photo, Barcelona's Lionel Messi celebrates after scoring his side's opening goal during a Spanish La Liga soccer match between Barcelona and Eibar at the Camp Nou stadium in Barcelona, Spain. (JOAN MONFORT / AP)

MADRID — Spanish soccer’s top-flight will resume after a three-month pause due to the coronavirus pandemic on June 11 with the local derby between Sevilla and Real Betis, the government’s department for sport (CSD) said in a statement on Friday.

President Javier Tebas has outlined La Liga’ plans to offer viewers the chance to hear virtual crowd noise during the matches, which will be played without supporters to prevent further spread of the virus

Meanwhile, president Javier Tebas has outlined La Liga’ plans to offer viewers the chance to hear virtual crowd noise during the matches, which will be played without supporters to prevent further spread of the virus.

“At a meeting of the contact group they form alongside the CSD, the Spanish soccer federation (RFEF) and La Liga have agreed to the format of the final 11 rounds of fixtures of La Liga and the second division,” said the CSD’s statement.

The statement added that the season would finish by July 18, “depending on the evolution of the virus”.

La Liga will be the second of Europe’s top five leagues to resume action after the pandemic paralysed all major sporting competitions around the world last March, following Germany’s Bundesliga starting up earlier this month.

German broadcasters have reproduced fan noise for television viewers in order to make the matches in empty stadiums more appealing and Tebas said the Spanish league are looking to use the same technology.

“Tonight we are doing audiovisual tests so that spectators will be able to choose between two backgrounds, the real one or one with fans and virtual sound,” Tebas told a forum organised by Spanish newspaper Marca on Friday.

“In the Bundesliga they have chosen to have virtual sound with a lot of success and we are working to try and have the same option.

“We want to give fans two options: silence or virtual sound. The tests that we have done are very interesting and surprising, but spectators will have both options.”

England’s Premier League will recommence on June 17 while Italy’s Serie A is set to continue on June 20, although France’s Ligue 1 was cancelled last month, with Paris St Germain declared champions.