The Metropolitan Museum of Art is changing its curatorial approach as it prepares to reopen in the future, Zhao Xu reports in New York. 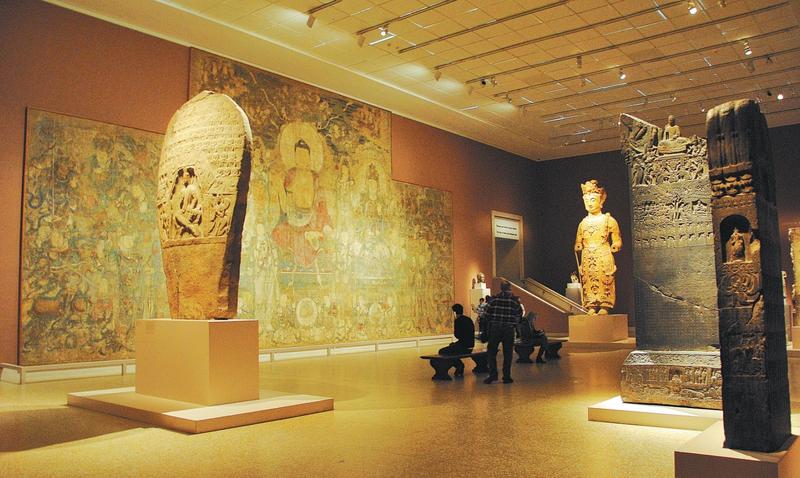 A file photo taken on April 4, 2019, of the Metropolitan Museum of Art, one of the top destinations for visitors in New York City. (ZENG YUTIAN / FOR CHINA DAILY)

After remaining closed since March 13 due to the COVID-19 pandemic, New York's Metropolitan Museum of Art expects to see a change in visitor numbers when it reopens, which is necessitating a change in its curatorial approach, says Kenneth Weine, the Met's chief communications officer.

He says 70 percent of the museum's visitors used to be from outside New York City, but "when the crisis subsides, we will reopen in a different environment".

In an email to China Daily, he adds, "We're in the very complex process of rescheduling planned exhibitions and events, which is then cascading across our planning for many years－just as it is at other institutions.

"The change in audiences might also mean a shift in our programming, with more focus put on our own collection and less on expensive loan shows. The Met expects that we'll all need to be nimble and creative. We'll be looking at what great experiences we can offer local visitors from within the museum's collections."

At such a challenging time, the role of museums is more important than ever. It reminds people of the world’s long history of interactions and cultural exchange

Maxwell Hearn, chairman, department of Asian art at the Metropolitan Museum of Art

The museum has an unparalleled advantage in that respect, Weine says.

"The mayor (Bill de Blasio) said something very helpful and important the other day. He said that when all these places reopen, New York City residents will likely remember what gems they have in their city," Weine adds.

"The incredible thing about the Met is that we have 1.5 million objects, 2 million square feet (186,000 square meters) and 17 curatorial departments. There's an abundance of treasures to share from our permanent collection for New Yorkers."

"Our highest priority is the safety of our staff and visitors. And we're working closely with the governor, the mayor and the public health authorities right now," he says. "They say that New York will have four phases of opening and the first phase will not begin until mid-June. Each phase will take two weeks and museums are in the fourth phase. So, it's going to take time."

But reprogramming exhibitions started much earlier.

"One of the complicated things about our museum and all museums is that we have long-planned exhibition calendars," he says, adding that as soon as the crisis hit, the Met's exhibition team started to re-engineer the calendar for the future.

"And we have made several changes," says Weine.

He says the much-anticipated exhibition, Art at the Tudor Courts, a joint effort by the Met and the Cleveland Museum of Art, originally planned for between early next week and October, will be postponed for two years.

But another high-profile show, the annual fashion exhibition mounted by the museum's Costume Institute to accompany its highly publicized Met Gala, will be held. Traditionally held on the first Monday of May, the star-studded red-carpet event and the gallery show, with the theme About Time: Fashion and Duration, are expected to take place in late October.

Then there's Making the Met (1870-2020), an exhibition that anchors the museum's 150th anniversary celebrations and "will lead visitors on an immersive, thought-provoking journey through the history of one of the world's preeminent cultural institutions", according to the museum's website.

"The exhibition was almost completely installed when we closed. And it will debut the day the museum opens," says Weine.

Reflecting on the financial damage still being done to the museum by the pandemic, Weine says,"What will be really impactful is not having tourists, because for anybody who walks in the door, if they are tourists, then we have admission revenue and retail. They go to our stores, they enjoy one of our restaurant venues ... that is a very significant thing."

Weine says the Met has an annual budget of more than US$320 million. The closure 10 weeks ago has affected the Met's three main locations on Fifth Avenue, the Met Breuer and the Met Cloisters. With revenue streams on hold, the museum puts its estimated financial losses at around US$100 million.

"We have gone to our trustees to create an emergency fund for the crisis and we aim to raise US$50 million," he says.

"This is unprecedented territory for us. Depressions and wars, hurricanes and blizzards, even September 11, we've never been closed for more than three days in our entire history."

"The Met is their No 1 destination," says Weine. "Now, even if we come up with the vaccine (for COVID-19) tomorrow, we cannot reverse the trend (of people not coming) immediately, because traveling a long haul is something people plan for months, if not years in advance."

Maxwell Hearn, chairman of the museum's department of Asian art, says the pandemic has driven nations and people apart rather than bring them together.

"At such a challenging time, the role of museums is more important than ever. It reminds people of the world's long history of interactions and cultural exchange," he says.

"I am particularly proud of the Met's commitment to showing its diverse audiences the full sweep of China's contributions to mankind's shared cultural heritage. And I look forward to a time when we can again welcome Chinese visitors to our galleries so that they can see their artistic tradition as an essential part of the Met's story of world art."

Since the COVID-19 outbreak, the museum has been featuring the work of its essential staff on social media. The first post is a photo of Saul Cohen, a technician from the museum's buildings department.

"It feels surreal to be working in a time of crisis, seeing my beloved main hall empty with no visitors or fellow workers. Today, I had the pleasure of bringing online a 75hp pump to provide cooling for our 2.4 million-square-foot museum," says Cohen in the caption.

"The Met is a beacon for culture and creativity for New York City and the rest of the world," says Weine. "We take that very seriously."