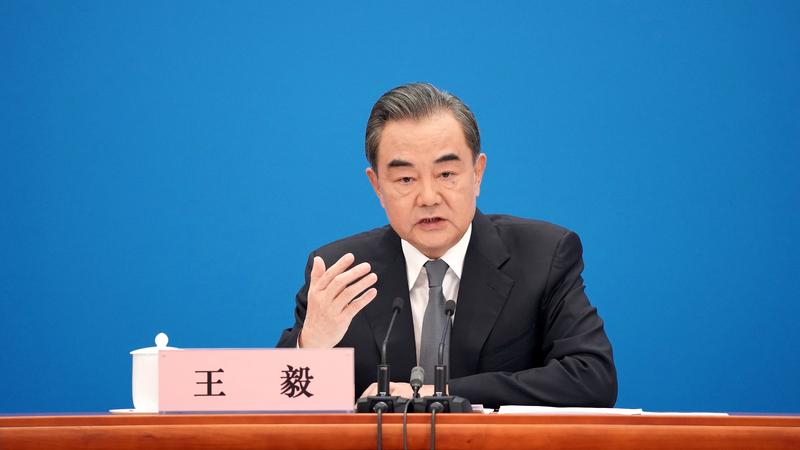 Chinese State Councilor and Foreign Minister Wang Yi attends a press conference on China's foreign policy and foreign relations via video link on the sidelines of the third session of the 13th National People's Congress (NPC) at the Great Hall of the People in Beijing, capital of China, May 24, 2020. (CAI YANG / XINHUA)

In a telephone conversation with Emmanuel Bonne, diplomatic counselor to French President Emmanuel Macron, Wang said that Hong Kong affairs fall within China's domestic affairs and that China is hoping that France will adhere to an objective and impartial position.

In accordance with the Constitution of the People's Republic of China and the Basic Law of the Hong Kong Special Administrative Region (HKSAR), the National People's Congress's move to establish and improve the legal system and enforcement mechanisms for the HKSAR to safeguard national security at the national level is a necessary choice to ensure Hong Kong's lasting peace and stability, which is reasonable, lawful and perfectly legitimate, Wang said.

No country or region can be unguarded in its security, he said.

China's move is aimed at filling a loophole in Hong Kong's national security legislation, which will not undermine Hong Kong's high degree of autonomy, but rather is conducive to promoting a steady and sustained development of the "one country, two systems" principle, improving Hong Kong's legal system, and better protecting the interests of investors of various countries.

For his part, Bonne said the French side respects China's national sovereignty and understands the sensitivity of Hong Kong-related affairs.

He said France has no intention of intervening in Hong Kong affairs and expressed the hope that relevant issues can be resolved properly under the "one country, two systems" framework.

Wang said that China and France have maintained close communication in the joint fight against the pandemic, which has demonstrated high-level strategic coordination.

As permanent members of the United Nations Security Council (UNSC) and responsible major countries, China and France should play a more active role in the uncertain international situation, he said.

China is willing to enhance coordination with France to increase political support and funding for the World Health Organization (WHO), jointly mobilize global resources and win the battle against the COVID-19 pandemic

Recalling that Chinese President Xi Jinping and Macron recently attended the opening of the 73rd session of the World Health Assembly (WHA) via video link, Wang said China and France have made contributions to the success of the assembly.

China stands ready to work with all parties to implement the Debt Service Suspension Initiative for the poorest countries adopted at a recent Group of 20 meeting, Wang said, calling for multilateral creditors and commercial creditors to participate in the initiative.

China is willing to work with France to actively carry out trilateral cooperation with Africa and help African countries fight the pandemic, he added.

China also supports France's initiative to hold a leaders' summit of the five permanent members of the UNSC via video, and the five countries have responsibility to send a positive signal of strengthening international anti-epidemic cooperation, said Wang, expressing hopes that France will continue to play its role in reaching a consensus on this regard among the five countries.

Bonne also congratulated China on holding the "two sessions" after making important progress in the fight against the pandemic.

As the international community has been gripped by tensions and misunderstanding due to the pandemic, France is willing to strengthen strategic communication with China, boost mutual trust and conduct multilateral coordination, he said.

The remarks by Xi and Macron at the WHA were highly consistent with each other, Bonne said, adding that France is ready to strengthen coordination with China to materialize the spirit of the remarks of the two heads of state and jointly promote international anti-epidemic cooperation.

France is ready to work with China to push the implementation of the Debt Service Suspension Initiative for the poorest countries and jointly help Africa fight the pandemic, he said.

France thanks China for its support in holding the video conference of the five permanent member states of the UNSC, Bonne said, adding that under the current complicated international situation, it is crucial for the five countries to demonstrate solidarity and France is ready to stay in communication with all parties in this regard.