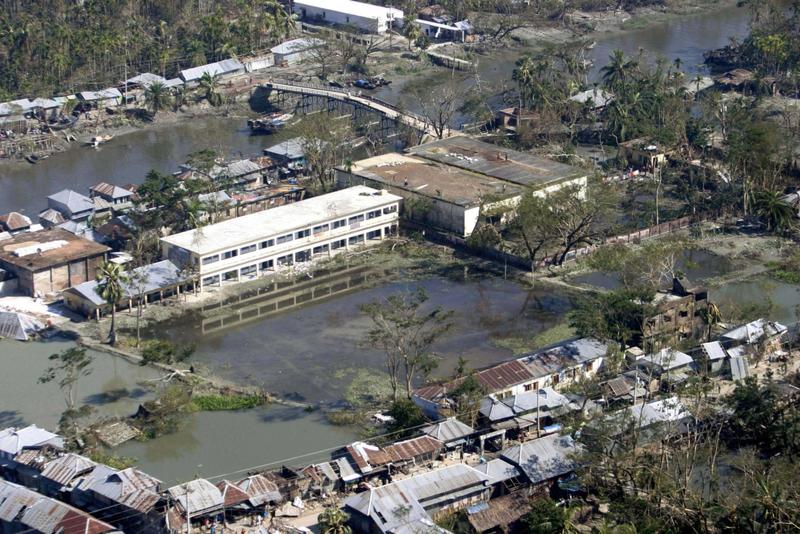 This Nov 2007 photo, shows extensive flooding in southern Bangladesh as a result of Cyclone Sidr. (PHOTO VIA BLOOMBERG)

Mizanur Rahman recalls the last time a major tropical storm hit Bangladesh, when Cyclone Sidr killed more than 3,000 people in 2007. In the aftermath of the destruction, he watched the dead body of a woman being washed ashore by the tide.

Bangladesh, a nation of more than 160 million people, currently invests 0.8% of GDP in water-related projects and would have to raise that to about 2.5% by 2030 to implement the projects with minimum financing

“That image doesn’t go away. It keeps coming back,” Rahman, a bungalow caretaker, said in the coastal town of Patuakali in Bangladesh’s huge river delta. The district was devastated by the 2007 storm and has been hit by a series of cyclones since, the latest being Amphan, which tore into the region last week, killing about 100 people in Bangladesh and India and causing more than US$13 billion in damage.

In an effort to strengthen its climate resilience, the Bangladesh government in 2018 approved Delta Plan 2100, an eight-decade program combining water and land management and development. The first phase requires about US$38 billion by 2030 to implement 80 projects, including 65 tied to infrastructure.

Raising that money was never going to be easy, but now the program to protect the 37 million people who live in the delta is in limbo -- hit first by the coronavirus and then by the damage from Amphan. Bangladesh evacuated 2.4 million people from coastal districts, State Minister for Disaster Management Enamur Rahman said in Dhaka on May 19, the day before the storm hit.

ALSO READ: Cyclone Amphan bears down on millions in India and Bangladesh

“Fundraising is a big challenge,” said Shamsul Alam, a senior secretary of the Bangladesh Planning Commission and lead author of the Delta Plan. “The coronavirus came as a huge, sudden shock. We have to readjust in the short run -- maybe for three to four budgets. We have to think carefully how we can adjust to the new situation.”

A Dutch consortium led by consultancy Twynstra helped develop the Delta Plan, most of which is in the world’s most-populated river delta, where the waters of the Ganges, the Brahmaputra and the Meghna reach the Bay of Bengal. Almost a third of the first-phase budget is earmarked for 23 coastal projects to prevent flooding, including land reclamation and building islands and polders.

Bangladesh, a nation of more than 160 million people, currently invests 0.8 percent of GDP in water-related projects and would have to raise that to about 2.5 percent by 2030 to implement the projects with minimum financing, Alam said. 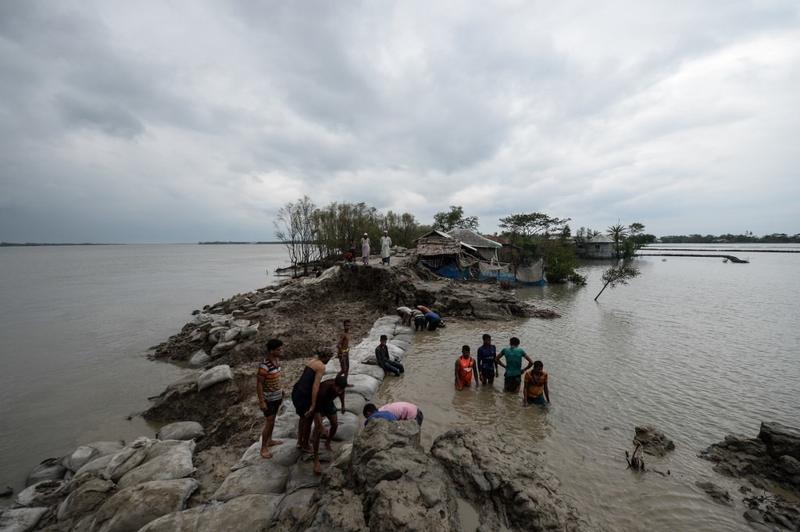 Volunteers and residents work to repair a damaged dam following the landfall of cyclone Amphan in Burigoalini on May 21, 2020. (MUNIR UZ ZAMAN / AFP)

“The coronavirus is one truth we’re facing now and climate change is another,” he said. “We need to handle these two issues in a combined way. We will emphasize our health services and go with universal health coverage, and at the same time, we need safe drinking water for health and good sanitation. These issues are interrelated.”

The country has more than 35,000 confirmed cases of COVID-19 and already borrowed US$950 million from lenders, including US$600 million from the Asian Development Bank, to tackle the virus. Bangladesh increased its social protection and economic stimulus package to 1 trillion taka, or 3.6 percent of the country’s GDP.

“The government will have to prioritize the immediate response and recovery effort over longer-term development projects,” said Joseph Parkes, Asia analyst at global risk research company Verisk Maplecroft. “We expect donors and the government to back the Delta Plan over the long run, even if the immediate focus shifts to the public-health crisis.”

Bangladesh’s rapid economic growth in the past two decades, fueled by an expanding garment trade and a burgeoning information-technology industry, has helped the country improve its resilience and gave momentum to the Delta Plan.

When Cyclone Sidr hit in 2007, it was the strongest storm to make landfall in Bangladesh, causing damage and losses of as much as US$1.7 billion, but its death toll was about 1 percent of the more than 300,000 lives lost in the Bhola Cyclone of 1970, the deadliest in the nation’s history.

Still, Amphan shows the nation’s continued vulnerability to rising sea levels if it doesn’t improve its defenses. Storm surges from cyclones can inundate land and water supplies, causing extensive damage to livelihoods in rural areas, where about 85 percent of the poor live. Agriculture and fishing account for almost half the jobs in the country and support more than 70 percent of the population, according to the ADB.

Days after the storm passed, Amir Hossain, a resident of the island of Char Montaz in the Bay of Bengal, stood on an embankment built more than a decade ago to protect the fishing district. “The tide was still two feet higher than normal,” Hossain said on May 25 as the water buffeted the sea defenses. “Without the dike, we would have been washed away.”