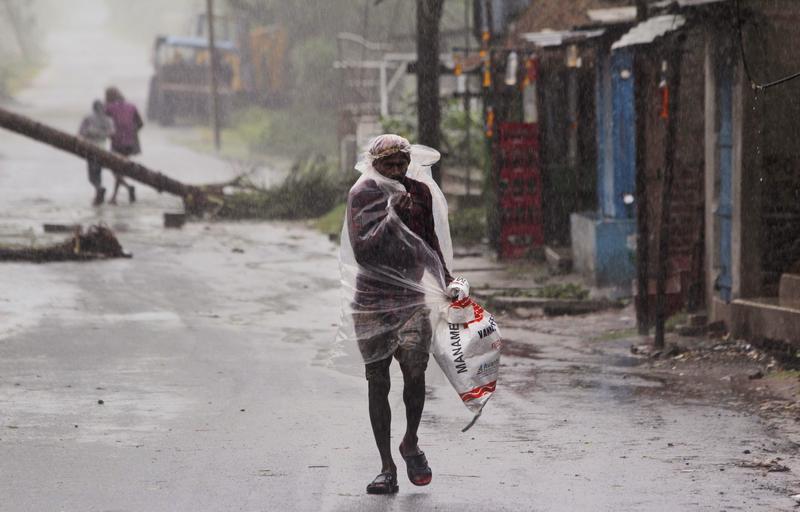 A man covers himself with a plastic sheet and walks in the rain ahead of Cyclone Amphan landfall, at Bhadrak district, in the eastern Indian state of Orissa, May 20, 2020. (PHOTO / AP)

KOLKATA / DHAKA  — The most powerful cyclone to strike eastern India and Bangladesh in over a decade killed at least 82 people, officials said, as rescue teams scoured devastated coastal villages, hampered by torn down power lines and flooding over large tracts of land.

Mass evacuations organised by authorities before Cyclone Amphan made landfall undoubtedly saved countless lives, but the full extent of the casualties and damage to property would only be known once communications were restored, officials said.

In the Indian state of West Bengal, Chief Minister Mamata Banerjee said on Thursday that at least 72 people had perished - most of them either electrocuted or killed by trees uprooted by winds that gusted up to 185 km per hour (115 mph). 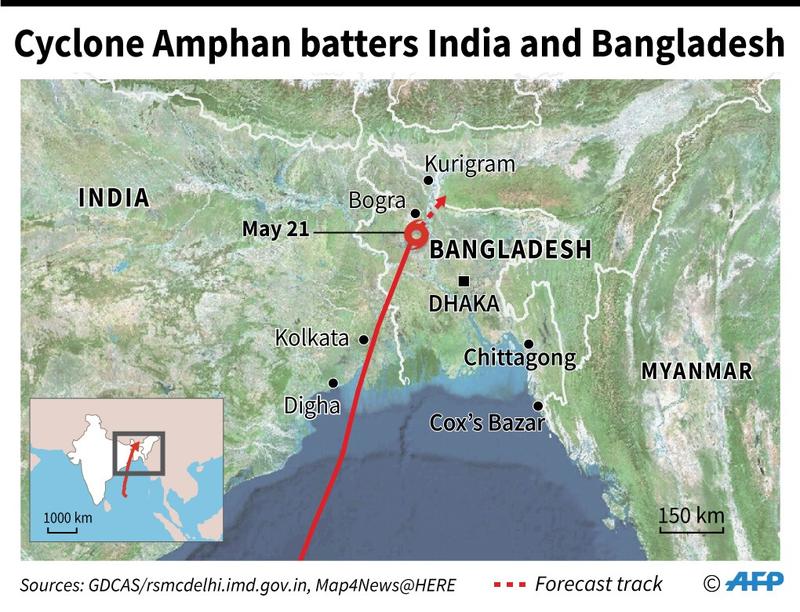 Moving inland through Bangladesh, Amphan was downgraded to a cyclonic storm on Thursday by the Indian weather office

In neighbouring Bangladesh, the initial toll was put at 10.

“I have never seen such a cyclone in my life. It seemed like the end of the world. All I could do was to pray... Almighty Allah saved us,” Azgar Ali, 49, a resident of Satkhira district on the Bangladesh coast told Reuters.

When the cyclone barrelled in from the Bay of Bengal on Wednesday the storm surge of around five metres resulted in flooding across the low-lying coastal areas.

Reuters Television footage shot in West Bengal showed upturned boats on the shore, people wading through knee-deep water and buses crashed into each other. More images showed villagers trying to lift fallen electricity poles, fishermen hauling their boats out of a choppy sea, and uprooted trees lying strewn across the countryside. 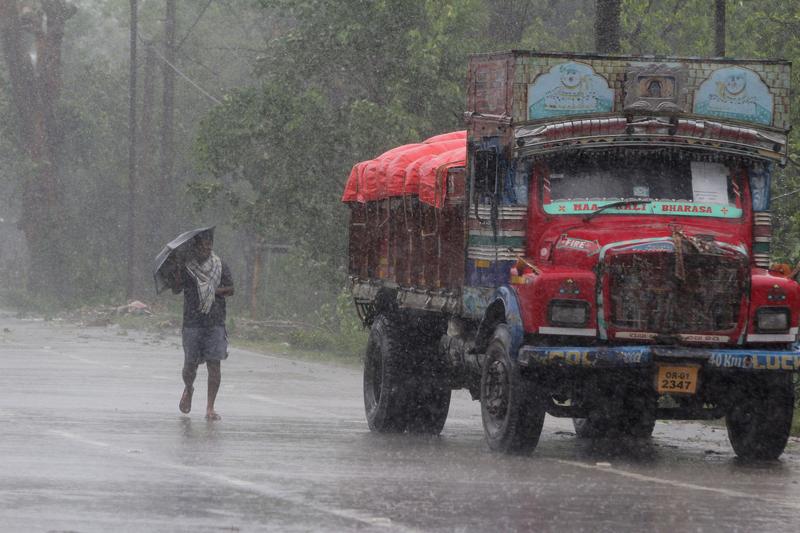 A man walks in the rain ahead of Cyclone Amphan landfall, at Bhadrak district, in the eastern Indian state of Orissa, May 20, 2020. (PHOTO / AP)

Designated a super cyclone, Amphan has weakened since making landfall. Moving inland through Bangladesh, it was downgraded to a cyclonic storm on Thursday by the Indian weather office. And the storm was expected to subside into a depression later.

“Have been seeing visuals from West Bengal on the devastation caused by Cyclone Amphan. In this challenging hour, the entire nation stands in solidarity with West Bengal,” he said.

Concern was growing over flooding in the Sundarbans, an ecologically-fragile region straddling the Indian-Bangladesh border, best known for thick mangrove forests and its tiger reserve. 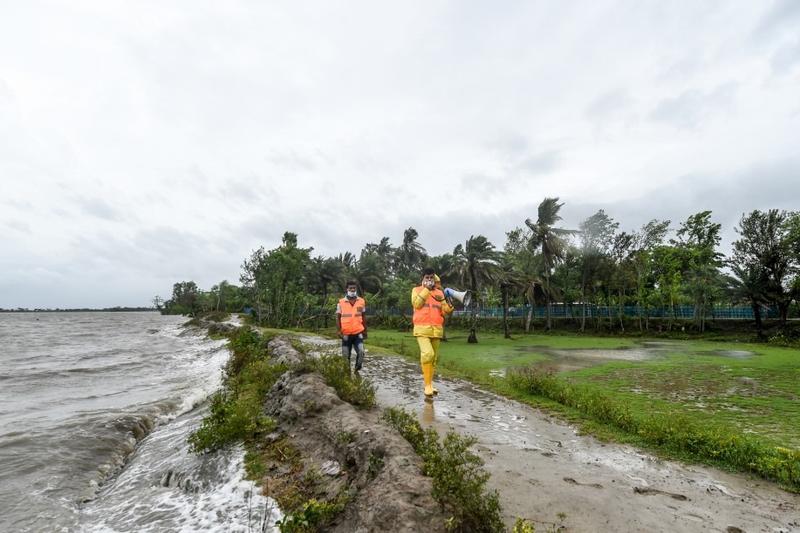 Volunteers of the Cyclone Preparedness Programme walk along in an alley as they use a megaphone to urge residents to evacuate to shelters ahead of the expected landfall of cyclone Amphan, in Dacope of Khulna district, Bangladesh on May 20, 2020. (PHOTO / AFP)

“The tidal surge submerged some part of the forest,” said Belayet Hossain, a forest official on the Bangladesh side of the forest. “We have seen trees uprooted, the tin-roofs of the guard towers blown off,” he said.

Over on the Indian side of the Sundarbans, a village official said embankments surrounding a low-lying island, where some 5,000 people live, had been washed away, and he had been unable to contact authorities for help.

“We have not been able inform them about anything since last night, the official, Sanjib Sagar, told Reuters.

Authorities in both countries managed to evacuate more than three million people, moving them to storm shelters before Amphan struck. But the evacuation effort was focused on communities that lay directly in the cyclone’s path, leaving villages on the flanks still vulnerable.

ALSO READ: Cyclone Amphan bears down on millions in India and Bangladesh

The airport in Kolkata, West Bengal’s state capital, lay under water and several neighbourhoods in the city of 14 million people have had no electricity since the storm struck, according to residents.

After the storm passed people were trying to retrieve articles from the rubble of their shops in the city.

Pradip Kumar Dalui, an official in the state’s South 24 Parganas area, said that storm waters breached river embankments in several places, flooding over half a dozen villages, that were home for more than 100,000 people.

Electricity lines and phone connections were down in many places, but so far no deaths had been reported in this area, he said.

The cyclone came at a time when the two countries are battling to stop the spread of the coronavirus, and some evacuees were initially reluctant to leave their homes for fear of possible infection in the packed storm shelters. 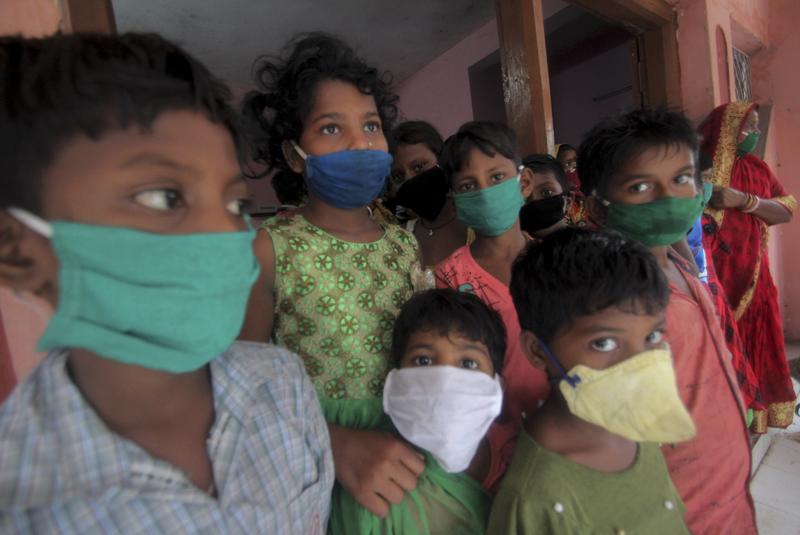 Evacuated children wearing masks as a precaution against the spread of coronavirus stand at a relief camp at Paradeep, India on May 19, 2020. (PHOTO / AP)

At least 19 million children in parts of Bangladesh and India are at imminent risk from flash flooding, storm surges and heavy rain as Cyclone Amphan has made landfall, the UN Children's Fund (UNICEF) warned on Wednesday.

UNICEF is also very concerned that COVID-19 could deepen the humanitarian consequences of Cyclone Amphan in both countries. Evacuees who have moved to crowded temporary shelters would be especially vulnerable to the spread of respiratory diseases like COVID-19, as well as other infections.

"We continue to monitor the situation closely," said Jean Gough, UNICEF Regional Director for South Asia. "The safety of children and their families in the areas that will be impacted is a priority and it is good to see that the authorities have planned their urgent response factoring in the on-going COVID-19 pandemic."

UNICEF is working with the Deputy Commissioner's Office in Cox's Bazar, the Office of the Refugee Relief and Repatriation Commissioner, and humanitarian partners to help ensure Bangladeshi and Rohingya children and families remain protected. These efforts include raising awareness among Rohingya and Bangladeshi communities on cyclone preparedness and prepositioning emergency life-saving water, sanitation, hygiene and medical supplies to meet immediate humanitarian needs, it said.