Cyclone Amphan bears down on millions in India and Bangladesh 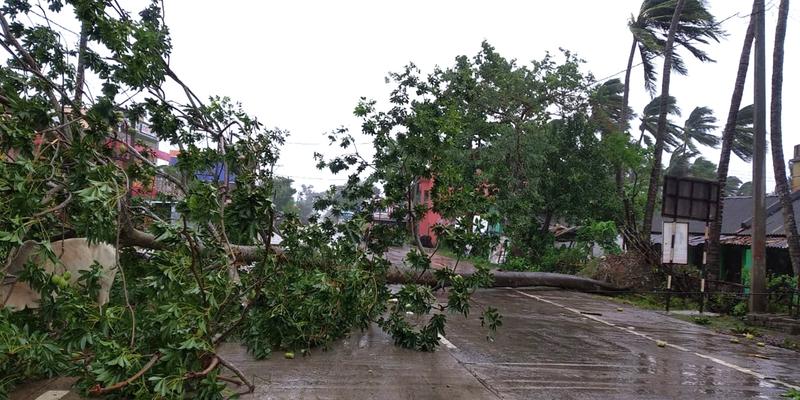 Trees lie uprooted on a highway from heavy winds ahead of Cyclone Amphan landfall, at Chandbali on the Bay of Bengal coast in Orissa, India, May 20, 2020. A powerful cyclone is moving toward India and Bangladesh as authorities try to evacuate millions of people while maintaining social distancing. (PHOTO / AP)

KOLKATA/DHAKA - A powerful cyclone tore into eastern India and Bangladesh on Wednesday, destroying mud houses and embankments and whipping up a storm surge along the coast, officials said, after millions of people were moved out of its path.

At least one 70-year-old man was killed by a falling tree in Bangladesh’s coastal Bhola district, a police official said. The low-lying country has evacuated 2.4 million people to shelters.

Another 650,000 people have been moved to safety in the eastern Indian states of Odisha and West Bengal, authorities said, an operation carried out amid surging coronavirus infections.

It was too early to estimate a toll on life or damage to property.

Cyclone Amphan, the biggest storm over the Bay of Bengal in about two decades, began moving inland with winds gusting up to 185 kph, Mrutyunjay Mohapatra, director general of the India Meteorological Department, told reporters.

Mohapatra said that the storm surge could rise to around five metres in the Sundarbans delta, home to around four million people and thick mangrove forests that are a critical tiger habitat.

“Our estimate is that some areas 10-15 kilometers from the coast could be inundated,” Mohapatra said.

On the Sundarbans’ Ghoramara island, resident Sanjib Sagar said several embankments surrounding settlements had been damaged, and some flooding had started. 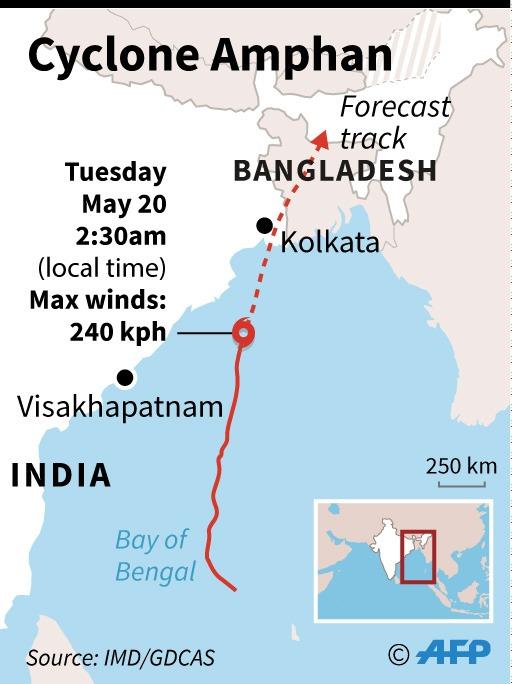 Map showing the forecast path of Cyclone Amphan as it heads across the Bay of Bengal on May 20, 2020. (PHOTO / AFP)

“A lot of houses have been damaged,” he told Reuters by phone.

A home ministry official said authorities in West Bengal and neighbouring Odisha had struggled to house thousands of evacuees as shelters were being used as coronavirus quarantine centers.

Extra shelters were being prepared in markets and government buildings with allowances made for social distancing, while masks were being distributed to villagers.

Police in West Bengal said some people were unwilling to go to the shelters because they were afraid of being infected by the coronavirus and many were refusing to leave their livestock.

“We have literally had to force people out of their homes, make them wear masks and put them in government buildings,” said a senior police official in Kolkata.

In Bangladesh, standing crops could be damaged and large tracts of fertile land washed away, officials said. Farmers were being helped to move produce and hundreds of thousands of animals to higher ground.

“Fortunately, the harvesting of the rice crop has almost been completed. Still it could leave a trail of destruction,” Mizanur Rahman Khan, a senior official in the Bangladesh agriculture ministry, said.

Bangladeshi officials also said they had moved hundreds of Rohingya refugees from Myanmar, living on a flood-prone island in the Bay of Bengal, to shelter.