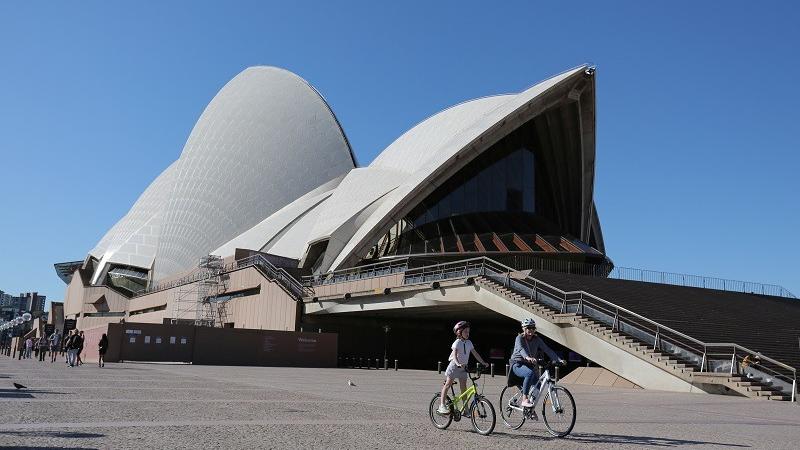 Residents are seen nearby Sydney Opera House in Sydney, Australia, on May 10, 2020. (BAI XUEFEI / XINHUA)

Australia needs to work on its relationship with China and increase dialogue or risk permanently damaging ties with its biggest trading partner, according to analysts.

They say the recent decision by Beijing to impose an 80 percent tariff on imports of Australian barley was not unexpected and did not happen overnight. Claims that Australia is dumping barley onto the Chinese market have been ongoing for more than 18 months.

Helen Sawczak, national chief executive officer of the Australia China Business Council, said the country's relationship with China will be "critical" to Australia's post-COVID-19 recovery just as it was after the global financial crisis in 2009.

"It's imperative that we strengthen relations," she said.

It's imperative that we strengthen relations. Economically, the Australia-China relationship has never been stronger

"Economically, the Australia-China relationship has never been stronger," she said, with a successful free trade agreement now five years in operation and A$235 billion (US$154 billion) in bilateral trade "reflecting the great complementarity of our economies".

It is on the political front, however, where relations have become a little strained, and this is worrying Australian business, she said.

Richard Maude, former deputy secretary of the Department of Foreign Affairs and Trade in Canberra, said without careful management, Australia's ties with China could descend into a "permanently adversarial" state where parts of the economic relationship are regularly at risk.

It was easier to talk about finding new export markets than actually finding them and it requires "patience, consistency and steadfastness on policy over the long term" to manage bilateral relations, Maude, the executive director of policy at the Asia Society Australia, wrote in a recent commentary.

Hans Hendrischke, professor of business and management at the University of Sydney's Business School, said relations between Australia and China are "structurally sound", adding "China does not see Australia as a hostile power. The two economies are complementary and there is a degree of mutual dependence.

"For Australia, China is the largest export market for resources, energy, agricultural produce and services like education and tourism. For China, Australia is a reliable and stable supplier for raw materials and consumer goods in demand by China's growing middle class."

Hendrischke said Australia is a regional neighbor able to serve as a bridge to the United States and Europe due to its cultural heritage, and as a bridge to China and Southeast Asia due to its immigrant population and multicultural society.

"However, bilateral relations are part of a broader context in which Australia is a minor player," he said.

Hence the deteriorating relations between Australia and China: China keeps normal trading relations with Australia, but signals its concern when Australia is perceived as adding to the conflict with the US, Hendrischke said.

He said the way to repair relations is to avoid further escalation of tensions.

China has been careful to flag the recent tariffs as technical issues and not a political sanction. "There is a big difference between the two," Hendrischke said. "Political sanctions are an official statement that relations have been damaged across the board.

"Technical trade issues can be resolved behind the scenes through negotiations at different levels. Trade barriers can be withdrawn at any time if the two sides reach a consensus."

Analysts say it is important that the two sides maintain dialogue and resume negotiations on where they draw the line between what both regard as legitimate political action, and political provocation.

"Recently, there has been a lack of communication. If dialogue can be reinstated, not necessarily at ministerial level but at a lower level or through trusted intermediaries, relations would be on the way to recovery," Hendrischke said.

Tim Harcourt, the J.W. Nevile Fellow in Economics at the University of New South Wales Business School in Sydney, said China is a massive consumer market with a large population and a growing urban middle class.

"The days of China being a low-labor-cost mass manufacturer are over, and they have a burgeoning middle-class consumer base demanding high-quality goods and services, as well as intermediate goods."