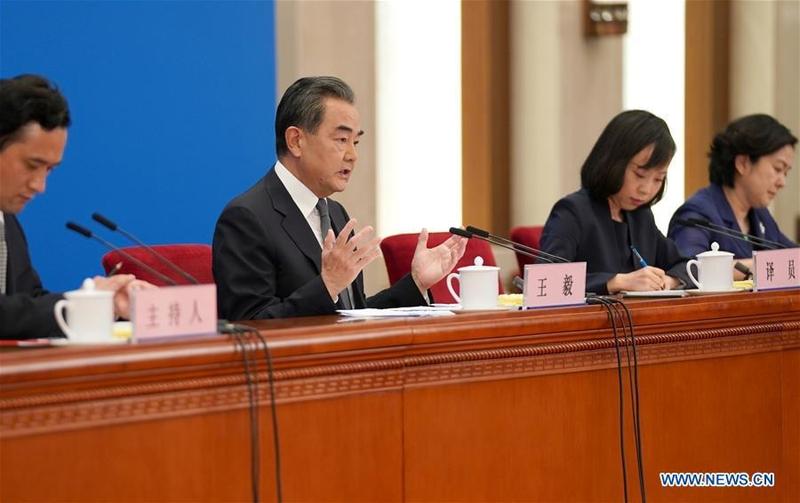 Chinese State Councilor and Foreign Minister Wang Yi (2nd left) attends a press conference on China's foreign policy and foreign relations via video link on the sidelines of the third session of the 13th National People's Congress at the Great Hall of the People in Beijing, capital of China, May 24, 2020. (WANG YUGUO/XINHUA)

Wang made the remarks in response to a question on national security legislation for the Hong Kong Special Administrative Region, at a press conference on the sidelines of the annual national legislative session.

Non-interference, as a basic norm of international relations, must be observed by all countries, Wang noted.

The central government is responsible for upholding national security, which is the same in any country, he said.

The central government holds the primary and ultimate responsibility for national security in all sub-national administrative regions, which is the basic theory and principle underpinning national sovereignty and a common practice in countries around the globe, he said.

Noting that excessive unlawful foreign meddling in Hong Kong affairs has placed China's national security in serious jeopardy, Wang said establishing and improving the legal system and enforcement mechanisms for the HKSAR to safeguard national security has become a pressing priority, and must be done without the slightest delay.

The adoption of the decision will start a legislative procedure, which will improve Hong Kong's legal system, and bring more stability, stronger rule of law, and a better business environment to Hong Kong, Wang said, adding that the basic principle of "one country, two systems" and Hong Kong's position as a global financial, trading and shipping center will be protected.